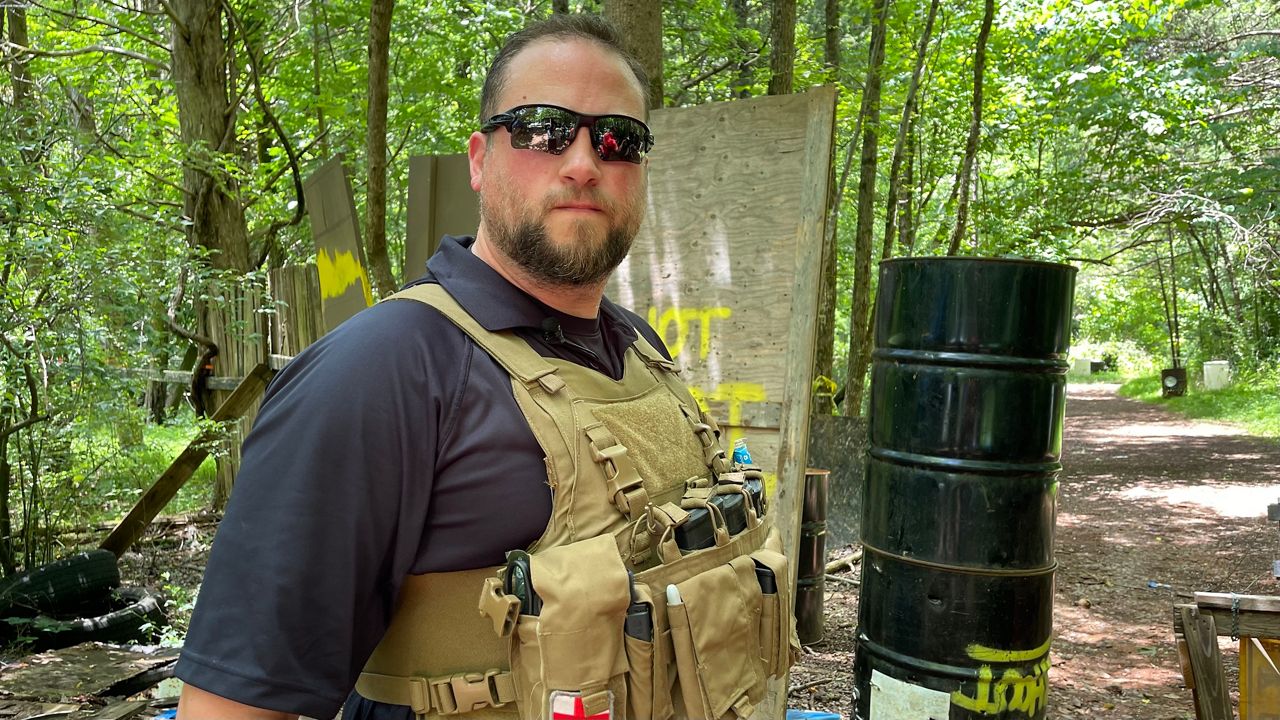 GRAHAM, N.C. — Members of Congress are working to find an agreement on bipartisan gun reform legislation after a number of deadly mass shootings.

Senators wrapped up their in-person negotiations last week without striking a deal because of a few sticking points, such as how to handle red flag provisions, stricter background checks and potential age limits on some gun purchases.

U.S. senators are working on gun safety legislation ahead of the Fourth of July recess in response to recent deadly mass shootings

Todd Totherow, a veteran who runs a security company, says guns are an occupational tool for him

He is against most gun reform but does support requiring gun owners to undergo safety training, especially those who want to use powerful weapons like an AR-15

Todd Totherow is a Marine Corps and Army veteran who now runs a security company, Signal, with offices in Mebane and Durham. He’s been around semi-automatic weapons like AR-15s since he was a teenager.

“I started weapons safety training in high school on the high school shooting team with air rifles, and then when I went to boot camp at age 17, that was when I was first issued an M16, which is the military equivalent of the AR-15,” he said.

He believes gun owners need training to learn the mechanics of how to safely use the weapon and when to use the weapon, which he calls a tool. Totherow says training builds traits like competence, integrity and trust.

“These tools are inherently dangerous because once that round leaves the chamber, you’re never getting it back,” Totherow said. “And basic safety rules are, never point the weapon at anything that you are not ready to destroy.”

The AR-15 is so popular among gun owners that the National Rifle Association has called it “America’s rifle.”

“For those that have had to carry these weapons for the past 20 years, it’s a tool. The novelty is gone. It’s not a status symbol. It’s not a toy. It’s an occupational tool,” Totherow said. “For people that just turned 18 years old, for 20 years old, it is a right of passage. It is a status symbol. And their egos are more attached to this status symbol than say a 20-year veteran.”

Totherow says he’s frustrated by mass shootings at schools. But that gun legislation that goes beyond training misses the mark and encroaches Second Amendment rights.

“Riding that fine line between competence and all-out ungoverned freedom, it is a dilemma, and we do have to find a perfect balance,” Totherow said. “Now if it were an easy answer, the Second Amendment, if it was an easy answer we would have solved it by now.”

When it comes to other aspects of gun safety reform like universal background checks and raising the minimum age, he is not in favor of those ideas. He says that it’s a matter of maturity and competence, not age, and having positive mentors, teachers and a good family dynamic.

Totherow thinks it’s more of a mental health issue than a government issue. He knows it’s not a one-size-fits-all solution, but he believes education and training on powerful weapons like an AR-15 is what’s needed.

Meanwhile, in North Carolina, it’s illegal for armed private security to be on educational property like schools or nurseries.

Totherow hopes North Carolina lawmakers will pass legislation to change that. He says his company is ready to work alongside law enforcement to protect children at schools.