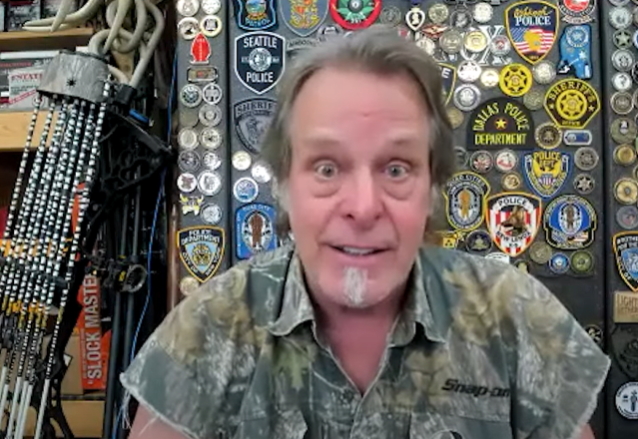 Ted Nugent sounded off on news that the Internal Revenue Service, Railroad Retirement Board and other federal agencies have been stocking up on thousands of rounds of ammunition.

As of January 2019, the IRS had stockpiled 4,600 guns and five million rounds of ammunition, according to a report from the watchdog group Open The Books published in 2020.

Nugent, who recently resigned from the board of the National Rifle Association (NRA) after 26 years, weighed in on IRS‘s purchase of ammunition during today’s (Wednesday, June 22) edition of “The Nightly Nuge”, a news-style clip in which Ted offers his take on the news of our world.

“I have a lot of friends in the federal law enforcement agencies and I respect their warrior dedication for law and order — most of them,” Ted said (as transcribed by BLABBERMOUTH.NET). “But unfortunately, the scammers and the power abusers are now running things. And I’ve gotta tell you, when you see that everybody now knows that the IRS is an illegal, immoral bureaucracy. Why in the hell would a tax agency need military artillery, like the Bureau Of Land Management and the Department Of The Interior and the U.S. Forest Service?

“Remember when they confronted the ranchers out in Nevada, I believe it was, because they overgrazed their grazing rights and they went after ’em with full military commandos in bureaucracies that are supposed to manage wild horses, which they completely mismanage.

“So I could go into more and more details, but the IRS is bad. The IRS is illegal. Lois Lerner used the power of the IRS — unlimited power — to abuse conservative families and conservative charities. [Editor’s note: In 2013, IRS official Lois Lerner revealed that conservative groups seeking tax-exempt status had been getting extra scrutiny, based on words such as “tea party” or “patriots” in their names.]

“Lois Lerner, why is she not in jail? She represents the atrocity of abuse of power by the Internal Revenue Service. Damn them all.”

IRS has reportedly been stockpiling heavy weapons for much of the past two decades, having spent more than $10 million on guns, ammunition and military-style equipment since 2004. IRS spent $2.3 million in 2011 on heavy weapons before dropping to $1.1 million in 2014, according to a report by Open The Books.

Last August, Nugent defended his right to bear arms under the Second Amendment, arguing that he “got it from God.” The 73-year-old musician discussed his natural-born rights as an American while talking to Tucker Carlson for an episode of Fox Nation‘s “Tucker Carlson Today”.

“Kings, emperors, tyrants, kiss my ass,” he continued. “We are a self-government. We are in charge, we hire people to represent us based on these self-evident truths. And if you infringe on them, we will fire your ass and don’t make us arrest you.”

Nugent went on to say that the purpose of the Second Amendment is to protect the nation from tyranny.

“[The Second Amendment] says any rights here that are not numerated are up to the states. It’s here and enumerated,” he said. “It’s written down, I can keep bear arms in America, in every building, on every street corner, wherever I want. I got it from God. The Founding Fathers just happened to write it down in case somebody wanted to play king.”