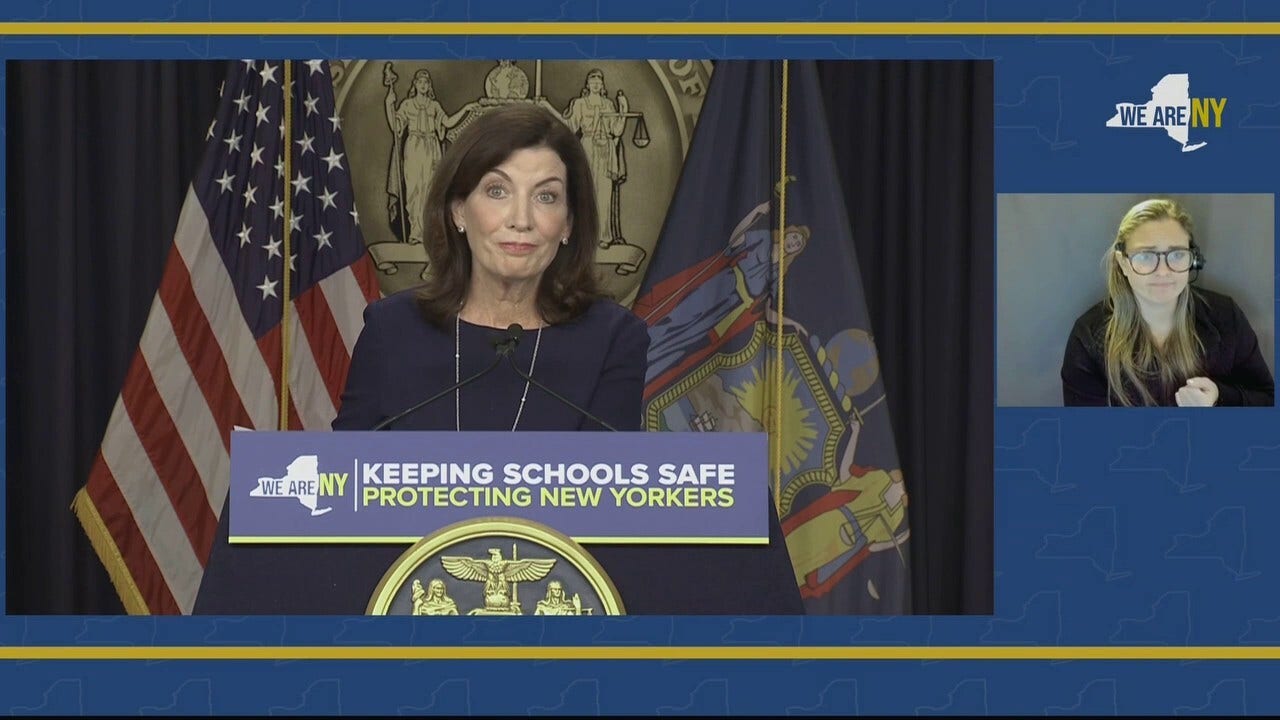 After the Supreme Court issued a ruling on Thursday which struck down the state’s tough regulations regarding those seeking a concealed carry permit, a defiant Governor Hochul made a televised address to her citizens denouncing the decision.

During the press conference, Hochul claimed the Supreme Court “has stripped away the State of New York’s right and responsibility to protect its citizens.” She added that the decision is “frightful in its scope” and “sending us backwards in our efforts to protect families and prevent gun violence.”

One moment of Hochul’s speech – around seven minutes in – went viral. The governor stated, “I’m sorry this dark day has come, that we’re supposed to go back to what was in place since 1788 when the Constitution of the United States of America was ratified. And I would like to point out to the Supreme Court justices that the only weapons at the time were muskets. I’m prepared to go back to muskets.”

MRCTV host Brittany Hughes slammed Hochul’s point, responding, “And the only politicians at that time were men. Your point?”

“If Kathy Hochul’s security detail doesn’t set an example by switching to only using muskets first… then she can f— right off,” Washington Times columnist Tim Young tweeted.

Former Trump senior adviser Stephen Miller asked, “Will the criminals rampaging freely across New York be going back to muskets as well?” He then posed another question to Hochul’s point, “Also, out of curiosity, what medium is Hochul using to broadcast this message and did it exist in the 18th century?”

Conservative author Carmine Sabia blasted Hochul’s talking point as well, claiming, “New York Gov. Kathy Hochul threatens that she is ‘prepared to go back to muskets’ as she appears determined to [violate] the Second Amendment.“

Conservative podcast host Monica Crowley asked, “Hi @GovKathyHochul- remember when you were in Congress and proudly touted your ‘A’ rating from the NRA? Good times.”

In addition to the address, the governor tweeted her frustrations. “It is outrageous that at a moment of national reckoning on gun violence, the Supreme Court has recklessly struck down a New York law that limits those who can carry concealed weapons,” she wrote.

Lawyer and conservative Matthew Kolken responded to Hochul’s tweet, writing, “Take the loss, Kathy. Or we will see you back in Court.”

Conservative journalist Beth Baumann rebuked Hochul’s post, accusing her of wanting to leave Americans victimized. “It’s outrageous that you want sexual assault survivors like myself to prove we have a ‘need’ for a CCW, even though our past is proof enough. I know what that’s like because I lived in your buddy Gavin Newsom’s state at the time.”

“How about start with the criminals NOT the civilians…” tweeted conservative personality Graham Allen in response to Hochul’s tweet.

Breitbart writer Wendell Husebo replied, “It’s a great ruling. Protects the right of self-defense. Not everyone can afford private security like Hochul.”