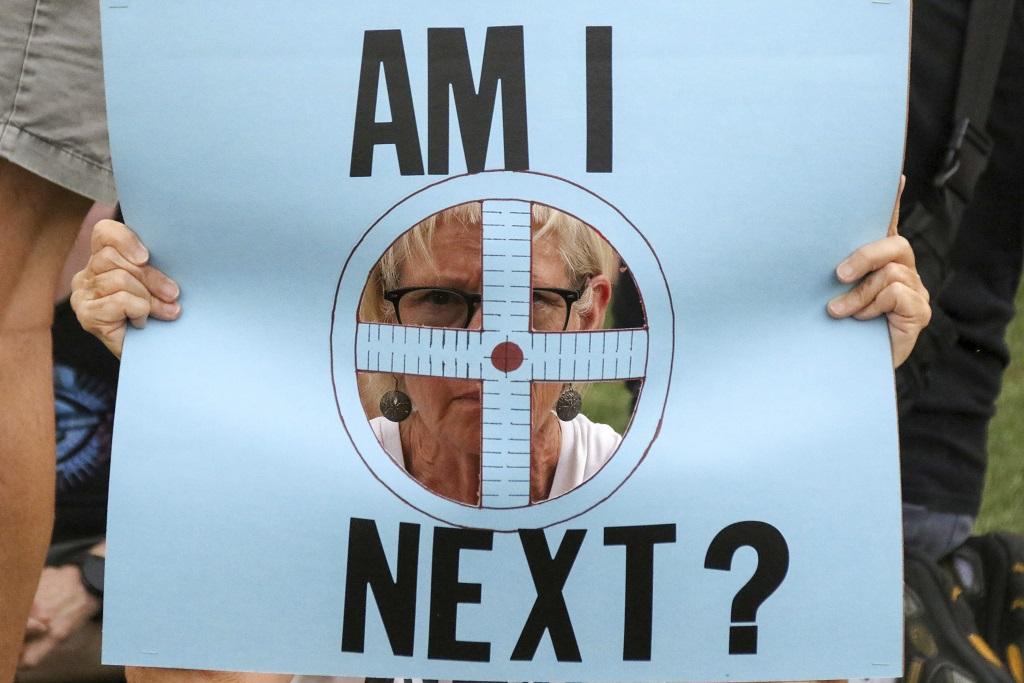 In 2019, as Ohio Gov. Mike DeWine tried to console mourners at a vigil for nine people killed by a gunman in a Dayton entertainment district, people in the audience took up the chant that became a slogan of the Ohio gun control movement. Not much happened in the three years between Dayton and Uvalde. But shortly after the Texas killings, the Republican signed into law a measure that reduces the amount of training armed teachers and school employees needed to carry a gun on school property from more than 700 hours to 24 hours. State teachers unions, parent advocacy groups like Moms Demand Action, and even the Ohio Fraternal Order of Police all opposed the law.

Ohio Federation of Teachers President Melissa Cropper called the move a “knee-jerk reaction” to Uvalde. “It’s something that they can point to and say we did something.” And what they are saying, according to Cropper, “is that to protect children teachers need to have guns.” She argues that the law will do little to protect schools compared to preventive measures like deeper background checks and keeping 18-year-olds from getting AR-15s.

Teachers, incidentally, are not interested in carrying guns for self-defense in schools. Both the Cincinnati Public Schools and the Cleveland Metropolitan School District have announced that their teachers will not be armed. Akron plans to rely on “current investments in security staffing and technology” to protect its schools.

In Texas, teachers have been able to carry weapons for nearly a decade. In 2013, shortly after the Sandy Hook massacre, the state established a school marshals program that allows school employee-volunteers to undergo rigorous firearms training and serve as school security officers. But a Texas Tribune investigation found that out of the state’s 1,200 school districts, only 84 have marshals, and of the state’s nearly 370,000 teachers, only 361 people have signed on to protect schools.

National Education Association President Becky Pringle rejects arming teachers as a solution to the gun violence epidemic, labeling it “a distraction” from passing stronger gun control measures. For Pringle, the Texas dynamic has not changed anything. “For any elected official to say that teachers and support staff should arm themselves, that’s not what’s going to protect our students,” she says.

In the post-Uvalde hellscape, demanding stronger school safety and hardening measures and falsely equating gun violence with mental illness is what passes for action on Capitol Hill. Under the Bipartisan Safer Communities Act, $20 billion would flow to states for limited gun safety measures and mental-health programs. Yet the act is an irresponsible papering over of the gun violence epidemic to preserve the “rights” of one group over the lives of children and teachers. Moreover, the Supreme Court ruling striking New York’s concealed-carry law will likely lead to a cascade of lawsuits seeking to undo similar gun control restrictions.

One of the primary effects of Uvalde is likely to be the acceleration of teacher discontent, profound job dissatisfaction, and poor mental health as they cope with the COVID backlash and, now, the push to dump school safety responsibilities on teachers.

The act is an irresponsible papering over of the gun violence epidemic to preserve the “rights” of one group over the lives of children and teachers.

Teachers have been underpaid, overburdened, and barely resourced for decades. They drive for Uber, wait tables, and use their own money for supplies. COVID has meant covering classes for colleagues who get sick or quit and stepping up to empty trash cans. On the instructional side of the ledger, they teach to the test, create lesson plans after hours at home, and try to make the bloodier chapters of American history warmer and fuzzier to appease state lawmakers and community culture warriors.

“Every social and economic issue that happens in America or frankly the world ends up in our classrooms, from the pandemic to political cultural wars and anxieties about gun violence,” says Randi Weingarten, president of the American Federation of Teachers. “There is nothing safe and welcoming about a year that starts with a pandemic and ends with mass murder in Uvalde.”

A new RAND Corporation study of educator well-being found that during the pandemic, twice as many teachers and principals reported job-related mental-health concerns—stress, depression, burnout—than other working adults. Latino, mid-career, and female teachers and principals are among the hardest hit by these problems and are, therefore, more likely to consider leaving the profession.

Sy Doan, a RAND associate policy researcher, noted that one of the most striking aspects of the study was that the staffing shortages that took teachers and principals away from teaching and related responsibilities were major stressors during the pandemic. Harassment over COVID-19 policies and alleged “critical race theory” lesson plans also produced profound decreases in well-being and job satisfaction for both principals and teachers, and so did school violence. Conducted in January, the study considered how broad types of school violence, from physical or verbal fights or individuals carrying weapons, left educators fearing for their personal safety at school.

“There are a lot of people who want to believe or say the pandemic is over, but we still have disruption in our schools,” says Pringle of the NEA. “You put on top of that the fear of gun violence, and dealing with gun violence that’s happening in communities across this country, and dealing with the students that come to them. There’s no question that it impacts their well-being.”

The Bipartisan Safer Communities Act is a model of NRA-molded legislation, a perplexing mix of limited funding for mental-health resources and weak gun safety and control measures that will do little to stanch violence in schools or elsewhere. There are billions of dollars available for community mental-health demonstration programs, anti-violence initiatives, and telehealth for people enrolled in Medicaid and the Children’s Health Insurance Program, known as CHIP.

The bill would also further “implement, enhance and expand” in-school mental-health centers using Medicaid funds as well as reauthorization and reviews of other mental-health programs. (Medicaid provides the third-largest pot of federal education funding.) Teachers would receive indirect benefits from the mental-health programs, through initiatives primarily directed at children, and teachers union leaders had measured praise for these aspects of the bill.

Yet widely touted provisions, such as a suicide and crisis hotline, rely on one-time infusions of funding or on funding streams that expire in less than a year. So far, at the federal level, arming teachers is a nonstarter; the bill specifically prohibits the use of federal education funds for arming people in schools.

That kicks the arming teachers debate back to the states. Across the country, there are all sorts of regulatory permutations regarding who can and cannot carry a gun on school property. Twenty states currently allow individuals who have gained the proper permissions from school officials to carry weapons. Texas Gov. Greg Abbott wants to encourage more people to sign on as school marshals. For the most part, the ones who do will not be school employees. A Texas American Federation of Teachers survey conducted one week after Uvalde found that 77 percent of Texas K-12 school employees and nearly 90 percent of higher-education workers do not want to be armed or expected to confront a shooter.

“Teachers already feel overwhelmed by the amount of responsibility that they have,” says Cropper of the Ohio AFT. “And even though [the Ohio law] doesn’t require teachers to carry guns it still feels like it is something that I am expected to do now. This is another one of the expectations that is being loaded on us as a profession to keep kids safe when no one else is doing anything to keep them safe.”

The federal bill perpetuates the false equivalence between mental illness and the propensity for gun violence, one that mental-health professionals continue to inveigh against. The legislation simply provides members of Congress with the cover to say, “Here’s what I did after Uvalde,” even though people under 21 can continue to buy weapons (and “receive them immediately” under the bipartisan legislation) as long as they have clean juvenile records.

The package has been described by some news outlets as the first major reform since the 1994 assault weapons ban, when, in fact, it is neither “major” nor a “reform” worthy of the name.

Safer Communities melds the moral bankruptcy of Republican cynicism with Democrats’ “the best we can do” posturing. The teachers and students who die in the next massacre will be collateral damage that Congress did nothing to prevent. What smells like progress on Capitol Hill carries the stench of failure everywhere else.