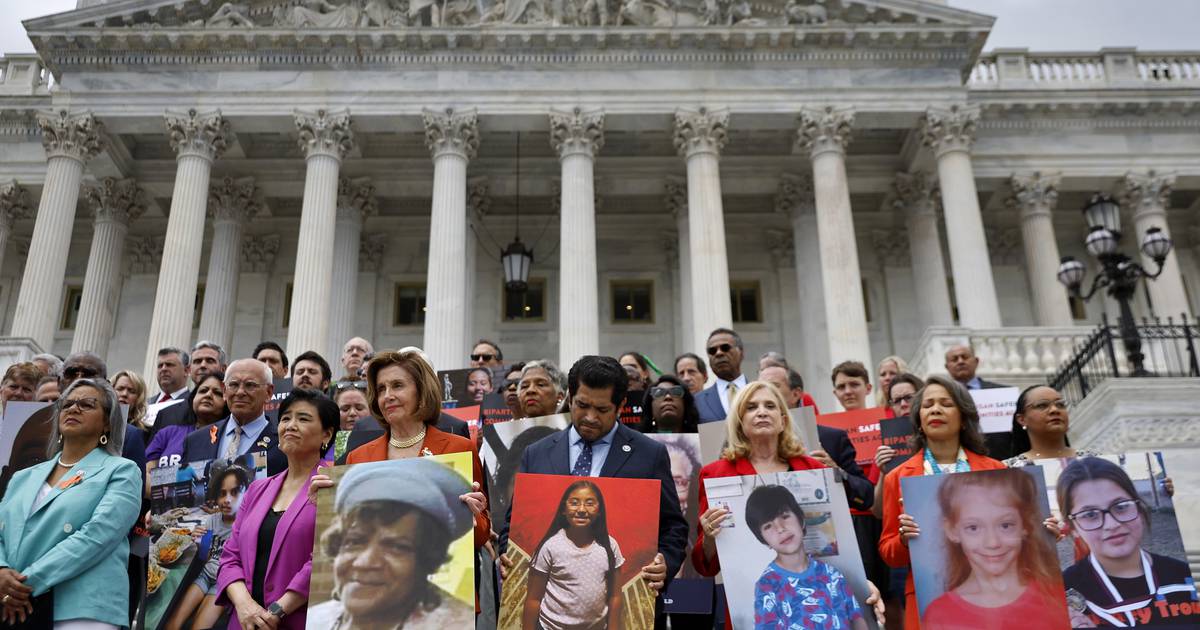 The House of Representatives voted 234-193 on Friday to give final approval to a compromise gun bill that won some bipartisan support after last month’s horrific mass shootings in a Buffalo, New York supermarket and a Texas elementary school in Uvalde.

In a mostly party-line vote, the Democratic-led House quickly passed the bill that modestly tightens some restrictions after the Senate voted overwhelmingly to approve it over the vehement objections of right-wing gun-rights advocates.

Only 14 Republicans joined all Democrats in voting for the bill including Rep. Chris Jacobs (R-N.Y.), the Buffalo-area lawmaker who decided not to run for reelection after his support for modest gun restrictions sparked an angry GOP backlash.

Rep. Nicole Malliotakis (R-N.Y.), the only GOP lawmaker representing the city, voted no, even though the Staten Island legislator has supported some gun restrictions in the past.

The $13 billion package toughens background checks for the youngest gun buyers, closed the “boyfriend loophole” as a way to keep firearms from people convicted of domestic abuse who are current or former romantic partners of the victims – not just spouses – and helps some states put in place red flag laws that make it easier for authorities to take weapons from people legally deemed as dangerous.

The legislation was a direct result of two recent mass shootings including an 18-year-old using a semi-automatic rifle to kill 19 children and two teachers at an elementary school in Uvalde, Texas, exactly one month ago, and the massacre of 10 Black shoppers days earlier in Buffalo, New York by an 18-year-old self-described white supremacist using an AR-15 style rifle.

“This gives our community the sorely needed hope that we have been crying out for, for years and years and years,” Rep. Lucy McBath, D-Ga., whose 17-year-old son was shot dead in 2012 by a man complaining his music was too loud, told supporters outside the Capitol. “Understand and know that this bill does not answer all of our prayers, but this is hope.”

The bill now heads to the White House for the signature of President Biden, who hailed it as an important step to prevent the blood lettings that have become a shockingly regular feature of American life.

“Kids in schools and communities will be safer because of it,” the president said.

Pelosi said with Thursday’s gun ruling by the justices, “the Trump-McConnell court is implicitly endorsing the tragedy of mass shootings and daily gun deaths plaguing our nation.” That was a reference to the balance-tipping three conservative justices appointed by Trump and confirmed by a Senate that was run by Majority Leader Mitch McConnell (R-Ky.).

Even though they support the measure, anti-gun violence advocates say much more action is needed including a ban on assault-type weapons and background checks for all gun transactions. While disappointed, advocates also acknowledge it’s the most impactful firearms violence measure Congress has approved since enacting a now-expired assault weapons ban in 1993.

Pro-gun Republicans emphatically reject such measures as infringements on the Second Amendment.

“Today they’re coming after our Second Amendment liberties, and who knows what it will be tomorrow,” Rep. Jim Jordan of Ohio, the House Judiciary Committee’s top Republican, said of Democrats.

The legislation was opposed by firearms groups like the National Rifle Association. But groups backing gun curbs like Brady and Everytown for Gun Safety weren’t the only ones backing it. Support also came from the Fraternal Order of Police and the International Association of Chiefs of Police.

In the Senate, every Democrat and 15 Republicans backed the compromise. Just two of those GOP senators face reelection next year.

But overall, fewer than one-third of GOP senators and just 1-in-15 House Republicans supported the measure. That means the fate of future congressional action on guns seems dubious, even as the GOP is expected to win House and possibly Senate control in the November elections.

Former President Donald Trump, by far the most powerful GOP leader, warned GOP lawmakers that a “yes” vote would amount to a “career-ending move.”