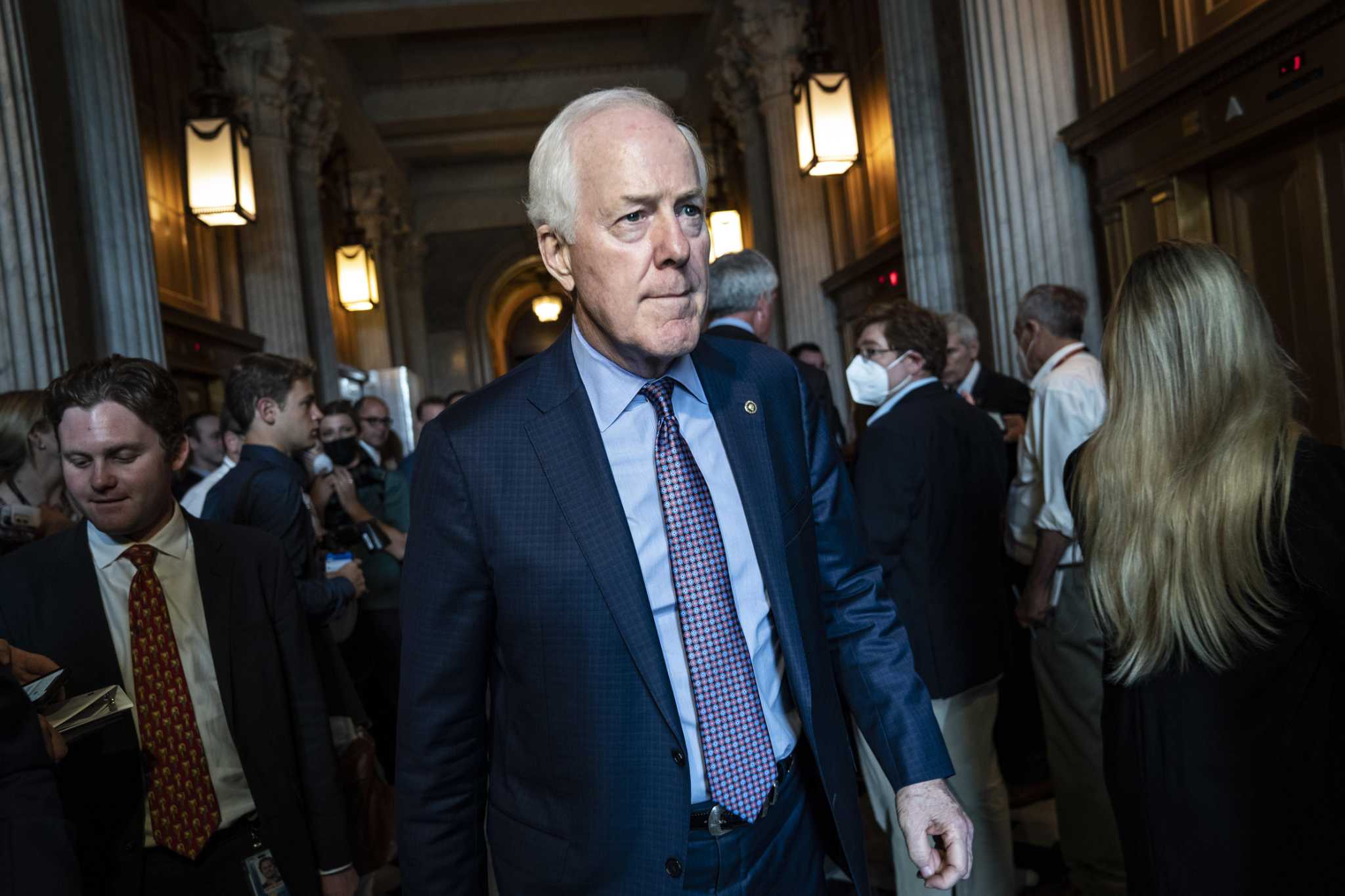 WASHINGTON — The booing didn’t bother him.

U.S. Sen. John Cornyn, who was viciously jeered by hundreds of Texas Republicans at the party convention in Houston this month, said he had an inkling that might happen given his high-profile role negotiating the Senate’s bipartisan gun legislation.

But the visceral intraparty criticism didn’t affect the final product — six days later, the Senate passed the most significant gun safety bill in a generation — the contours of which did not dramatically change from how it was originally presented to the American public a week before.

Calling it “an unpleasant experience,” Cornyn said he was “not discouraged at all” by the heckling from his home state.

“I showed up knowing that it might happen the way it did, thinking that maybe some people would actually listen,” he said in an interview with reporters on Monday. “Unfortunately, the people who wanted to listen could not hear because of those who were shutting down any kind of dialogue or conversation, and that’s a shame.”

President Joe Biden signed the Bipartisan Safer Communities Act into law on Saturday. More than any other senator, Cornyn is responsible for shepherding the landmark legislation through a chamber that has long been a graveyard for almost any policy outside of approving government spending and judicial confirmations.

In pushing for the new gun safety legislation after the horrific shooting at Robb Elementary School that left 21 people dead, Cornyn knew the only way to go big was to aim small. There would be no talk of weapons bans and no consideration for universal background checks. He and his allies would pursue only what they knew they could pass.

In leading the effort to build consensus, Cornyn also wanted to reinstill faith that the U.S. Senate can still function.

“This was fundamentally important to the country at a time when things are so polarized and people are so intolerant of others that have different points of view,” he said. “I thought it was important to demonstrate the Senate could work.”

Ultimately, Cornyn made good on his promise to get the bill passed in the Senate. He whipped 14 other Republicans — five more than needed to bypass a filibuster.

He did so by embracing compromise and political risk.

In the frenzied lead-up to the vote, Cornyn preached the gospel of consensus-building while openly defying powerful Republican constituencies, including back home in Texas.

When Senate Minority Leader Mitch McConnell needed a proxy negotiator amid calls for the Senate to act on gun policy after the shooting in Uvalde, he tasked Cornyn, his close ally.

House and Senate Democrats telegraphed that after so many years of legislative disappointments on gun policy, they would begrudgingly accept nearly any agreement the negotiators produced, even ones that didn’t include their priorities of raising the age to purchase a firearm and expanding background checks.

Cornyn laid down a red line on behalf of Republicans: Any bill that restricted the gun rights of law-abiding citizens, like an assault weapons ban, was a nonstarter.

That meant that 50 of the 60 votes needed to pass a bill were all but locked in by the Democrats. The onus then shifted to Cornyn and his ability to garner at least 10 GOP Senate votes to bypass a filibuster threat.

Negotiations transpired over the phone, Zoom, text messaging, on planes, in hallways and on the Senate floor. When senators returned to their home states, Cornyn and others continued to push for momentum with public appearances and continued contact with colleagues.

The end result was a modest proposal: increased funding for mental health, incentives for states to implement red flag laws that keep guns out of the hands of individuals who pose threats to themselves or others, increased school security funding and the closing of what is known as “the boyfriend loophole.” Current federal statutes prohibit firearm purchases for those convicted of committing domestic violence against spouses or partners who live together or share a child. To close the loophole, the new law will leave to the courts how to define and include dating partners who commit such abuse.

“It just shows that when people want to get an outcome, that is possible,” he said.

Before and after the vote, Cornyn spoke frankly about Republican colleagues who backed the bill in spirit but not when they arrived to vote in the Senate well.

“I know that there are a number of people who are glad we passed this legislation but who did not want to vote for the bill for their own political reasons,” he said.

This legislative hustle came at a moment when Cornyn had political capital to spend.

After former U.S. Rep. Beto O’Rourke’s near-defeat of U.S. Sen. Ted Cruz in 2018, Republicans were running scared when Cornyn was up for reelection in 2020. In that race, Cornyn proved to be a stable standard-bearer who is widely credited with running such a strong statewide campaign that he probably saved several Republican federal and state legislative seats.

His performance even improved among Republicans, compared to his 2014 race.

“I got 76% of the primary vote in 2020,” he reminded reporters on Monday, when pressed about his negative reception earlier this month at the state GOP convention in Houston.

“The Republican primary voters are a much broader group than is represented at the Republican state convention,” he added.

But Cornyn was not within the mainstream of the Texas GOP political class in this instance.

Cornyn whipped far more out-of-state GOP senators than Republican members of his own delegation: U.S. Rep. Tony Gonzales of San Antonio, who represents Uvalde, was the only Texas Republican to join him in backing the bill.

Cruz was one of the most vocal opponents of the bill, taking to the Senate floor ahead of the vote.

Barrasso and U.S. Sen. John Thune of South Dakota are widely viewed as Cornyn’s top rivals in a future race to lead the Senate GOP conference. Both men voted against the bill.

Throughout the month of negotiations, Cornyn regularly engaged with a suspicious base of gun activists who interrogated him over specific concerns about this bill blocking law-abiding citizens from access to guns.

He walked a tightrope with the National Rifle Association.

“We did consult with the NRA and the National Shooting Sports Foundation and other gun groups because, frankly, they have a lot of expertise in this area, and we wanted to make sure we didn’t make unintended mistakes,” he said.

He was quick to demonstrate NRA influence over the bill, citing a restoration of gun rights in the bill to offenders if there are no further offenses over five years.

The NRA “couldn’t get to an endorsement but I do think they were somewhat restrained in their criticism of the bill, and I appreciate that,” Cornyn said. “But in the end, no outside group was going to have veto power over what we did.”

When asked if the political advocacy against the bill went too far, Cornyn deflected.

“I know this is hard to believe, but I never really felt any external pressure,” he said. “All the pressure I felt was internal because I’d been given an assignment by the Republican leader and I felt responsible for getting to a result.”

A former Texas attorney general and state Supreme Court justice, Cornyn patiently walked through the legal nuances of the proposal on conservative talk radio, during rounds on Fox News and in debriefings with skeptical Republican senators.

At times, he seemed to relish his defiance.

“In so many areas these days, it’s easy for people to misinform or confuse or just outright, because of their own political agenda, attack people or ideas that others are working on,” he said on Monday. “I think it goes with the territory.”

What this new law means for Cornyn’s political career is an open question.

Former President Donald Trump took to social media in the lead-up to the vote to call Cornyn a RINO (Republican in name only) and described the deal as going down “in history as the first step in the movement to TAKE YOUR GUNS AWAY.”

“Republicans, be careful what you wish for,” added Trump.

But Cornyn’s political bill coming due is likely a long way off. He will not be up for reelection until 2026, and there is no indication that the Senate leader, McConnell, intends to retire anytime soon.

So, for now, Cornyn is focused on his work in the Senate, saying he is “responsible to 29 million Texans, and that’s who I look to for my guidance.”

“Americans are wondering whether our institutions can still work the way they’re supposed to, in addressing their best interests and actually trying to get things done,” he said.

“I think we demonstrated that is still possible, and it happens for us more than most people realize.”

Join us at The Texas Tribune Festival, happening Sept. 22-24 in downtown Austin, and hear from 300+ speakers shaping the future of Texas including Joe Straus, Jen Psaki, Joaquin Castro, Mayra Flores and many others. See all speakers announced to date and buy tickets.

This article originally appeared in The Texas Tribune at https://www.texastribune.org/2022/06/27/john-cornyn-texas-gun-bill/.

The Texas Tribune is a member-supported, nonpartisan newsroom informing and engaging Texans on state politics and policy. Learn more at texastribune.org.