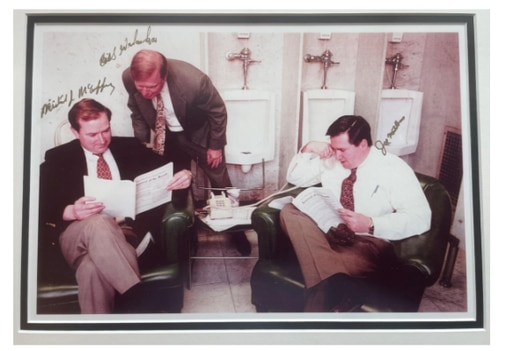 And the announcement comes four days after House Minority Leader Blake A. Filippi, a Block Island Republican, announced he will not seek re-election this year.

“It is with a heavy heart that after nearly three decades in the state Senate I am deciding not to seek re-election to an institution that I deeply admire and respect,” McCaffrey said in a statement. “This decision does not come lightly, but it is one that I have arrived at after innumerable conversations with family, friends, and supporters. Now is the right time for me to bow out and spend my extracurricular time with those that I hold most dear.”

A weekday briefing from veteran Rhode Island reporters, focused on the things that matter most in the Ocean State.

In an interview, McCaffrey told the Globe he began thinking about leaving the Senate back in February after his 24-year-old son ended up on a ventilator. His son tested negative for COVID-19 and recovered, but he said the incident gave him “a different perspective” on how he was spending his time.

“I’ve been up there 28 years — that’s a long time to be in any job, especially elected office,” McCaffrey said. “I would have liked to be Senate president some day, but I’m not getting any younger, and I want to spend more time with my family and more time at the law practice.”

He said his decision had nothing to do with any recent issues or controversies.

McCaffrey had an “A” rating from the NRA, but he was criticized by Second Amendment advocates on June 14 when he helped the Senate find a way to pass legislation limiting gun magazine capacity to 10 rounds.

The Senate Judiciary Committee deadlocked on the bill in a 6-to-6 vote, leaving it stuck in committee, but in a highly unusual move, McCaffrey then asked to have the Senate take up the House version of the bill for immediate consideration, and the Senate passed it by a vote of 25 to 11.

“I did take heat from both sides on that,” McCaffrey said Monday. “That was the right thing to do.”

McCaffrey, 58, has served in the Senate since 1994, and Monday’s announcement noted that when he was first elected he was “part of a group of dissidents.” The announcement included a photo of him in his “first office” — a State House bathroom — along with former Senate president Joseph A. Montalbano (now a state judge) and the late Senator William A. Walaska.

Over the years, McCaffrey rose through the ranks to become Senate Judiciary Committee chair, and he has served as majority leader for the past five years.

In recent years, the former dissident has found himself the target of criticism from more progressive Democrats. He said the legislature has become less collegial. “When I first started in the General Assembly, I was on the outs. However, we were still friends,” McCaffrey said, noting he remains friends with former Senator Rhoda Perry, who was more liberal. “It has changed in the General Assembly.”

McCaffrey, a lawyer, said he is most proud of the criminal justice legislation he championed.

“My day-to-day experiences in Rhode Island’s criminal justice system consistently informed my policy decisions in the Senate,” he said. “I have fought hard to ease the burden on working families, to ensure that our criminal justice system is sympathetic to those in need of treatment for mental health and substance use disorders, and to expand protections for immigrants seeking to call this country home.”

The announcement said McCaffrey also worked on diversifying the judiciary, and, most recently, shepherding through what advocates say is the most progressive cannabis regulation system in the country.

McCaffrey said serving as Senate majority leader “has been the most rewarding experience of my career in public service.”

“I have been blessed to fight for the causes I believe in while also using the position as an opportunity to sit down with colleagues from across the political spectrum,” he said. “I have fought vigorously for the priorities of the Senate and its members, but this role also comes at great expense to my personal and professional endeavors. Now is the appropriate time for me to step away from public life.”

McCaffrey said he leaves the Senate knowing his colleagues and future senators will continue to advocate for those causes. “I have finished this leg of my race,” he said.

McCaffrey runs a private legal practice in Warwick with his brother, Jack. He is the son of former Warwick mayor Eugene McCaffrey and Ann McCaffrey. He and his wife have four children.

Ruggerio, a North Providence Democrat, thanked McCaffrey for his service.

“Michael is my right hand in leadership,” Ruggerio said. “He provides wisdom, savvy, and calm. His knowledge of how to navigate the complexities of the legislative process is unmatched. I looked to Michael to lead on the toughest issues, such as cannabis legalization and reform of our criminal justice system. He leaves an indelible mark on this state and this chamber. I am fortunate to have served alongside him and to call him a friend.”

In 2020, Rourke, a co-founder of the Rhode Island Political Cooperative, lost a Democratic primary to McCaffrey, who received 58.2 percent of the vote to her 41.8 percent. Rourke has announced that she is running for the Senate District 29 seat this year.

On Monday, following McCaffrey’s announcement, the progressive group issued a statement, calling for the Democratic Party to endorse Rourke. The endorsement is made by the party’s district committee.

“As abortion rights are being stripped away across our country, it’s more important now than ever that the Rhode Island Democratic Party throws their support behind front-line reproductive rights organizers,” said Senator Jeanine Calkin, a co-chair of the Rhode Island Political Cooperative.

The group said Rourke is “a leader in the fight for reproductive justice in Rhode Island,” She is on the board of The Womxn Project and Time to Run, is vice chair of the Rhode Island Democratic Women’s Caucus, and chair of the Advisory Committee for the Black Lives Matter RI PAC.

The RIDP applauds all candidates who put themselves on the ballot to help their communities. We are outraged by the violence at the Roe v. Wade protest and condemn the candidate-directed violence. It’s sad in 2022 that the words of Malcolm X are still true, “The most disrespected

The Rhode Island Political Cooperative said Monday, “If the Rhode Island Democratic Party truly believes these words, then they will throw their support behind the Black woman who has fought for reproductive rights, racial justice, and the true values of the Democratic Party in the race for District 29 and endorse Jennifer Rourke for state Senate.”

Monday marked the first day for candidates to formally declare their plans to run for office this year. They have until Wednesday to make the decision.

While Rourke is the only announced candidate at this point, McCaffrey said, “I know I have had number of calls this morning from people expressing interest in running.” He declined to disclose who had called him.