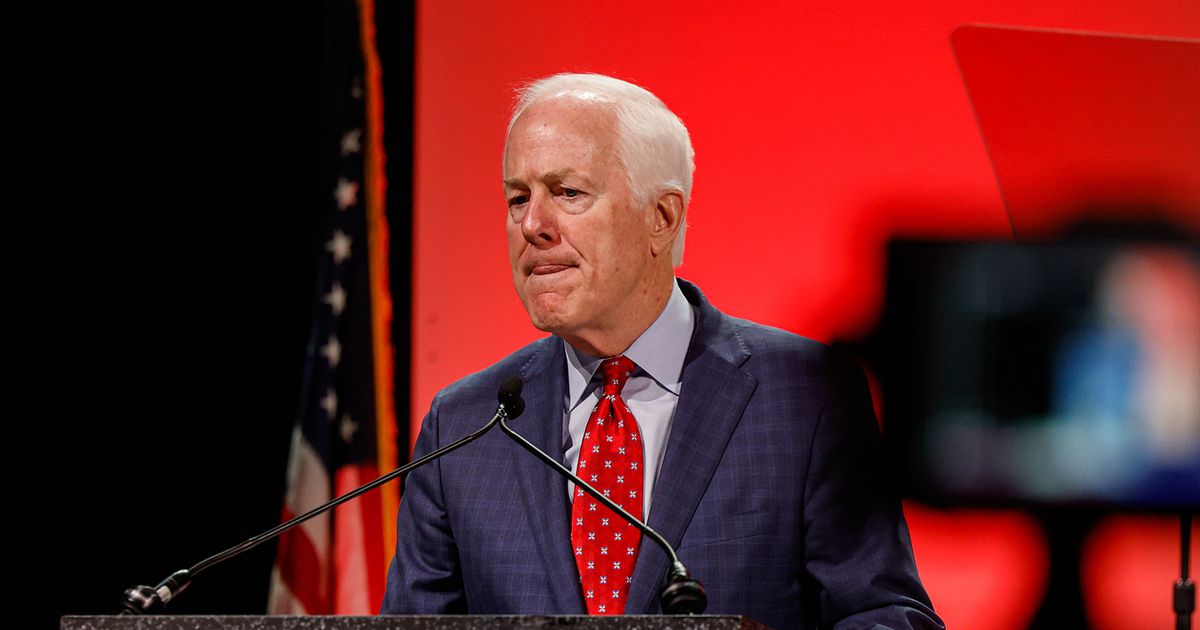 WASHINGTON — Sen. John Cornyn on Monday downplayed conservative criticism of the gun violence package he helped shepherd into law and defended the final product as evidence Congress can still come together behind bipartisan compromise to address pressing issues.

Cornyn recounted being disappointed but hardly shocked at the raucous jeering that greeted his address to the Texas Republican convention earlier this month.

Some of his state party’s most die-hard faithful took strong exception to his role in the gun talks sparked in large part by the Robb Elementary School shooting in Uvalde that left 19 children and two teachers dead.

Boos and shouts of “No red flags” and “Don’t take our guns” at least partly drowned out Cornyn’s remarks as he sought in vain to make his case to the convention delegates.

“Unfortunately, that was an unpleasant experience but I showed up knowing that it might happen the way it did, thinking that maybe some people would actually listen,” Cornyn said Monday during a conference call with Texas reporters. “Unfortunately, the people who wanted to listen could not hear because of those who were . . . shutting down any kind of dialogue or conversation.”

Cornyn described the measure as worthwhile for its substance: funding a network of community-based mental health clinics, bolstering school security practices and making modest changes to gun laws intended to keep weapons away from dangerous individuals.

But he also said it sends a message to Americans questioning whether the country’s institutions have become so politically polarized they can no longer function.

The sausage making involved wasn’t always easy, though, and the high-profile convention heckling came at a delicate point in the negotiations.

Cornyn had been tapped by Senate Minority Leader Mitch McConnell, R-Ky., to represent Republicans at the table. But Cornyn became frustrated that the pace of their work had slowed and walked out of a negotiating meeting as he rushed to catch a plane back to Texas ahead of his big speech.

Negotiators at the time were struggling to nail down language on the bill’s federal funding for state-level red flag laws, with Cornyn pushing to grant equal funding to states such as Texas that pursued alternate approaches to address potentially dangerous individuals.

They also wrestled with tightening prohibitions on domestic violence offenders, with Democrats advocating a broad definition of those offenders and Cornyn favoring a more narrow approach.

Despite the conservative criticism, Cornyn pulled the bill across the finish line just one week after his convention speech.

Cornyn said it was a shame some delegates weren’t interested in hearing what he had to say, but he touted his party credentials by citing his 76% share of the 2020 primary vote.

“The Republican primary voters are a much broader group than is represented at the Republican state convention,” Cornyn said.

Cornyn said many people have reached out to thank him for his work on the law.

“They’re not as public or as obvious as the people who booed at the Republican state convention, but I think it’s important for everybody to realize we’re a big diverse state and a big diverse country and there are a lot of people who think what we did was a positive step,” Cornyn said.

Cornyn said repeatedly during the process that the legislation improves the system for keeping guns away from dangerous individuals without infringing on the rights of law-abiding citizens.

His Democratic counterpart in the negotiations, Sen. Chris Murphy of Connecticut, has defended the law to those who favored much more aggressive gun control measures such as universal background checks or a ban on assault weapons and high capacity magazines.

Some Democrats have characterized the law as an important first step and suggested Congress could pass additional gun bills in the future after Republican lawmakers see that bucking the National Rifle Association is not political career suicide.

Cornyn downplayed the potential for additional gun-related legislation, though, at least in the near term. He said such proposals are a “heavy lift” for Congress.

He also noted that the NRA was consulted as they wrote the legislation, particularly in areas such as the closing of the so-called “boyfriend loophole.”

Current law takes away gun rights from those convicted of domestic violence when they have been married to the victim, lived with them or had a child together.

The new law extends those prohibitions to those who abuse significant dating partners, but those provisions are not retroactive. They also include the ability for first-time misdemeanor offenders to restore their gun rights if they keep a clean record for five years.

Last week, Cornyn told reporters that despite its input, the NRA was unlikely to ever get behind legislation because of the group’s “business model.” He echoed those points on Monday.

“The NRA is a membership organization and their ability to recruit members and to raise money is dependent on their not offending their membership,” Corny said.

The NRA said it strongly opposed the bill because “behind the façade and the contrived talking points of safety, school security and mental health, this is a gun control bill.”

Cornyn said Monday he appreciated that the group was “somewhat restrained” in its criticism. It’s certainly true that hardline gun rights advocacy groups were downright savage in their criticisms.

He said Monday that Democrats like to demonize groups such as the NRA that represent gun owners and act as if those organizations control Congress.

“This bill demonstrates that there is no outside organization that has veto power over good public policy in this area,” Cornyn said.