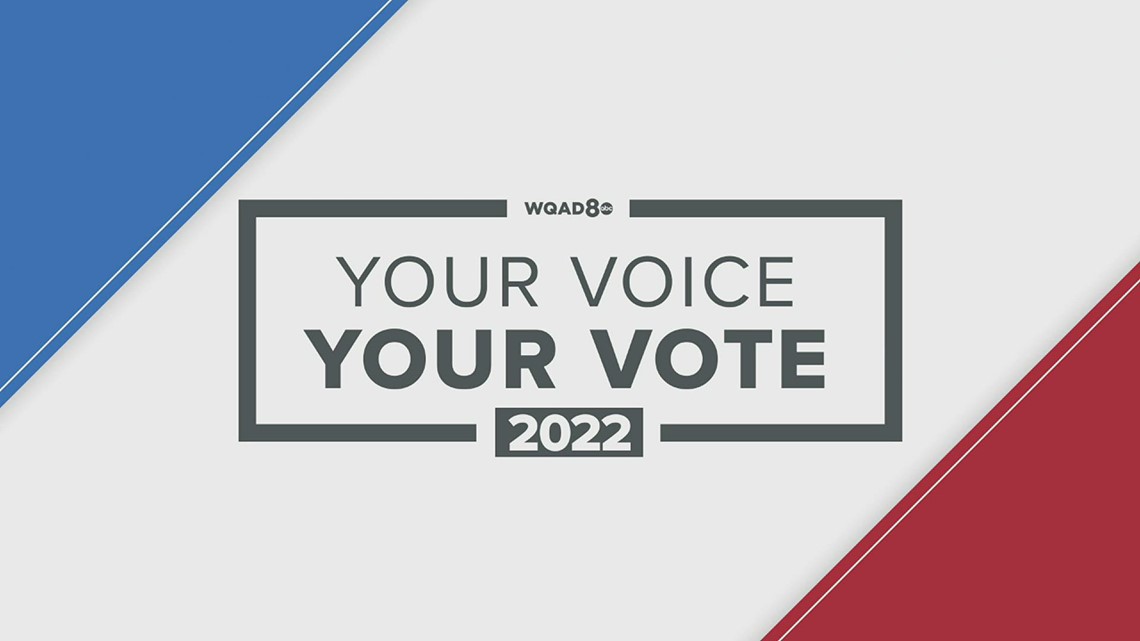 Numerous seats are up for grabs in U.S. House of Representative races across multiple Quad Cities area districts.

MOLINE, Ill — Midterms are just around the corner, and Illinoisans will head to the polls on June 28 to cast their votes in the state’s 2022 primary election. Voters in the three congressional districts that fall inside the Quad Cities will be choosing how to fill a number of U.S. Representative seats.

Here are the candidates on the Democratic and Republican primary ballots in the 15th, 16th and 17th Districts:

The 15th District, having just received a major facelift from the recent redistricting, ranges from the southern edge of the Quad Cities area in west-central Illinois, parts of the Springfield, Champaign and St. Louis metro areas as well as and a large chunk of central Illinois.

U.S. Rep. Mary Miller, according to her campaign website, is an incumbent currently representing the district following her victory in the 2020 election and swearing-in on January 3, 2021.

Miller’s campaign describes her as a conservative, ‘America First’ fighter and defined Miller by her opposition to Democratic leaders, policies and movements, including COVID-19 regulations, the investigation into the Jan. 6 Insurrection, gun regulation and abortion.

Rodney Davis, who currently represents Illinois’ 13th Congressional District, is now running in the 15th District after state redistricting. He has served in his current district since 2013.

Davis is an Iowa native who moved to Taylorsville, Illinois, when he was 7 years old and later graduated from the private Millikin University in Decatur with a bachelor’s degree in political science.

His political career began as a staff assistant to Illinois Secretary of State George Ryan for four years before an unsuccessful run for state legislature in 1996. The following year, he joined U.S. Rep. John Shimkus’ 1998 reelection campaign. He worked with Shimkus until 2012, after which he launched his campaign for representative.

Davis’s campaign presents him as a stable, value-driven conservative politician who sticks to anti-abortion, pro-military and Second Amendment values. He said his experience in governing gives him the ability to do the job that Republican voters expect.

The sole Democrat on the primary bill for the 15th District, Paul Lange offers the Democratic opposition to the two Republican incumbents.

Not much information about Lange is currently accessible. According to his campaign website, he believes in an American economy should represent an opportunity that all can access, strengthening Social Security and Medicare and increasing transparency.

This district serves across northern Illinois outside of the Chicago area, the eastern edges of the Quad Cities and central Illinois locations like Peoria and Bloomington. The representative seat is open following the departure of U.S. Rep. Adam Kinzinger (R-Illinois).

Congressman Darin LaHood currently represents the 18th District of Illinois. He previously won reelection by 70% of the votes en route to serving his third full-term in Congress on Nov. 3, 2020.

LaHood, according to his campaign website, served four years in the Illinois State Senate beginning in 2011. Prior to that, he spent over nine years as a state and federal prosecutor. From 2001 to 2006, LaHood worked for the U.S. Department of Justice as an assistant united states attorney in Las Vegas. He also practiced with the Peoria law firm of Miller, Hall & Triggs from 2006 before getting elected to the U.S. House of Representatives.

Walt Peters according to his campaign website, is a Midwest native and a U.S. Army Reserves veteran who served for 26 years and eventually retired as a Lieutenant Colonel. He grew up with a love for aviation, earning his pilot’s license at 17 years old. He still flies and owns his own airplanes and remains active in the aviation community.

Peters earned a degree in Aerospace Engineering from the University of Michigan where he was commissioned in the Army and deployed to Korea as a Second Lieutenant. He worked for Miller Fluid Power during the first five years of his career. During this time, Peters attended Northern Illinois University on a GI Bill where he earned an MBA and eventually took a job with Sundstrand Aerospace in Rockford, working on several military and commercial aircraft programs. He went on to become the director of marketing and sales at GE Aviation in Loves Park.

Peters cites his humility, innovation, productivity and hard work throughout his career as the characteristics needed in Congress today.

JoAnne Guillemette, according to her campaign website, received her license to practice law in 1986 and has since handled civil, criminal trials and appeals in State and Federal Courts of Illinois, Texas, New York, Arkansas and Washington D.C. Guillemette has served as an assistant city attorney, assistant state’s attorney, assistant attorney general, arbitrator, legal advisor and judicial officer for governmental agencies and litigator in private practice.

She’s lived in Illinois for the majority of her life, graduating from Auburn High School in Rockford. Guillemette attended Northern Illinois University before transferring and graduating from the University of Illinois in Urbana with a bachelor’s degree before working as a teacher and social worker.

Guillemette said that her professions ignited a passion to protect children and families in the court system, leading her to pursue and earn a Juris Doctorate from the University of Houston Law School.

As an elected U.S. Representative, Guillemette hopes to raise her voice in Washington D.C. for families, workers, seniors, veterans and all who call Illinois home.

Michael Rebresh, according to his campaign website, is a resident of the 16th Congressional District and a businessman of more than 23 years. In 2020, Rebresh founded the Million Unmasked March and led protests against mask mandates in Illinois.

Rebresh’s campaign uses an “America-first” agenda. He emphasized the importance of making sure U.S. citizens are tended to first with components such as American-made medicines and medical supplies, border security, school choice and energy independence.

No Democrats are in contention for the seat. Bradley Hordges Jr. is set to run as an Independent. Not much information is available about his campaign.

Bustos announced in 2021 that she would not run for reelection in 2022, so her seat is now up for grabs.

Charles “Charlie” William Helmick Jr. is a lifelong Quad Cities resident making his first-ever run for office. He’s a small business owner selling insurance with his wife out of Silvis, Illinois. Nicknamed the “FedEx man”, Helmick worked at the shipping company for 30 years and previously served in the U.S. Marine Corps, according to his campaign website.

Helmick is a supporter of free speech and the Second Amendment and does not want to be censored by big tech social companies.

Esther Joy King, according to her campaign website, is currently an entrepreneur and practices and practices law in East Moline, focusing on real estate for economic development. She previously served as a captain in the U.S. Army Reserve where she spent time in Kabul, Afghanistan, as an aid worker for women’s rights. During the U.S. military withdrawal, King says she helped dozens of young girls she previously taught to escape the Taliban regime.

She studied at Northwestern School of Law where she earned a Juris Doctorate and Masters of Law in Taxation. King began her legal career as an Associate at Kirkland & Ellis LLP in Chicago, later serving the State of Illinois in the Office of Entrepreneurship, Innovation & Technology. Her experiences have led her to seek out “common-sense” solutions for Illinois workers and small-business owners.

King is a member of the U.S. Army Reserve Judge Advocate General Corps and was recently promoted to captain and assigned to the Rock Island Arsenal. She says one of the main drivers of her run for Congress is to create growing economic opportunities for residents of central and western Illinois.

A native of Roscoe, Angie Normoyle currently teaches at her alma mater, Augustana College, and has served on the Moline and Rock Island school boards. While serving, Normoyle, according to her campaign website, has pushed for students to have access to high-quality education. She said her son has struggled due to his medical issues, putting her career on hold to homeschool him.

She said she believes all Americans willing to work should be able to live the American Dream. Normoyle’s great-grandparents became United Auto Workers members after standing in line at the local GM plant hoping to get work. They eventually received opportunities to work in factories with guaranteed hours, benefits and secure retirement.

Eric Sorensen, according to his campaign website, is a native of Rockford and currently resides in the Quad Cities area. Sorensen previously worked as a meteorologist for WQAD News 8, chief meteorologist at WREX in Rockford and at a television station in Texas.

Sorenson is an active member in the LGBTQ+ community. He served on the boards of Clock, Inc. and The Project of the Quad Cities. In these roles, he’s supported initiatives aimed at connecting vulnerable individuals to health services. He also kickstarted Project Tornado, an initiative bringing meteorologists into schools to help kids feel safe during severe weather. Sorenson said he helped educate 50,000 students in his career.

As a meteorologist, Sorensen discussed climate change with viewers and continues to seek efforts to combat the topic. Other goals of his campaign include strengthening the state’s health care system, investing in education, creating sustainable jobs and preventing “the next pandemic.”

Litesa Wallace, according to her campaign website, is an Illinois native and currently works in Rockford, where she leads efforts to end homelessness and advocates for cleaner, more sustainable energy for people throughout the state.

She became the first college graduate in her family after attending Western Illinois University. She eventually earned a doctorate in educational psychology as a single mother during grad school at Northern Illinois University. After working as a counselor in Rockford, Wallace joined State Rep. Charles Jefferson’s office as chief of staff and was chosen as his replacement in the General Assembly in 2014. She went on to win reelection for two more terms.

In 2018, Wallace ran for lieutenant governor and traveled across Illinois to learn first-hand about the issues most important to residents and their families.

A lifelong Illinois resident, Marsha Williams currently works as a branch manager for 160 Driving Academy in Peoria, Moline and Rockford, educating and placing truck drivers in new jobs throughout the country, according to her campaign website.

Both of Marsha’s parents were members of AFSCME, leading her to pursue change in the economic system and activism for various issues. Her activism began in 2002, when she volunteered as an abortion escort and organizer of events to protect Planned Parenthood. Marsha said her work helped her receive care after losing her son while she was 38-weeks pregnant. She graduated from Purdue Global University with a bachelor’s degree in legal studies.

Jaqueline McGowan, according to her campaign website, is the founder of Green Street Consulting, a company that uses consultants and data analysts to help empower individuals and their businesses.

McGowan has previously worked in Capital Markets, in both Illinois and Wall Street, using a concentration in brokering everyday Americans. She’s lived in Chicago, New York and California. In California, McGowan was an advocate, lobbyist and business consultant serving the cannabis ecosystem. She ran for California governor in 2021.

Instead of running for office in California or New York, McGowan said a “fierce drive” to return to her rural American roots and change policy like her ancestors is a large reason for her decision to run for the 17th district.

In her campaign, McGowan has said she will ensure government protection for farmers, provide access to affordable health care, release 40,000 non-violent cannabis offenders and assist small businesses in ways to keep them open.