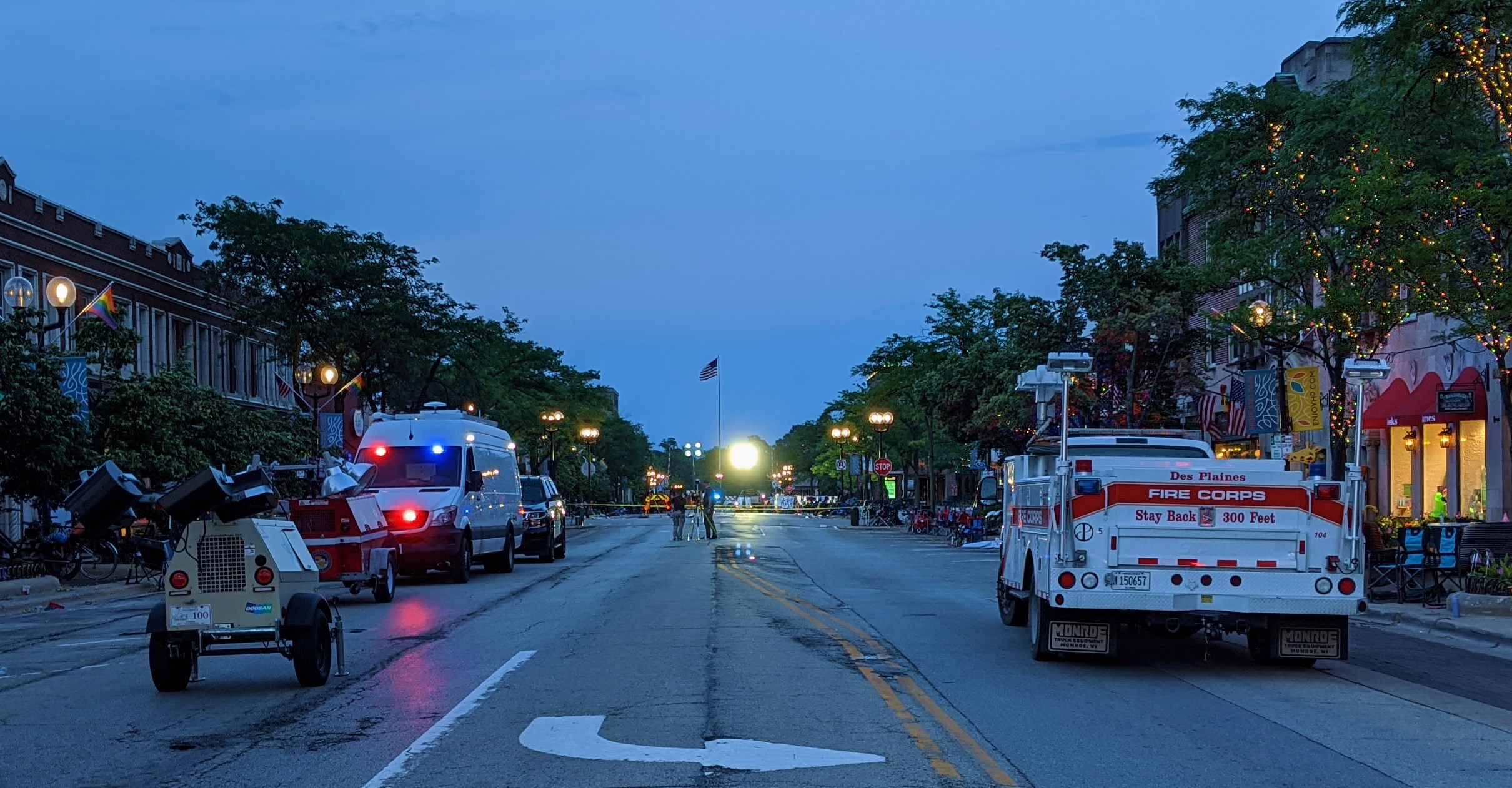 Nothing was said about it on the July 4 television interviews I saw, but among the security experts interviewed during coverage of the Highland Park parade shooting, one face and name had resonance. Crisis management expert and former FBI agent Phil Andrew survived another mass shooting in Chicago’s North Shore suburbs, more than three decades ago.

On May 20, 1988, Laurie Dann—who’d been under care for psychiatric problems—delivered poison-laced snacks to acquaintances, attempted to burn down a Highland Park school, set a house on fire with the family (for whom she’d babysat) inside, and shot six children at Winnetka’s Hubbard Woods elementary school, killing one. Fleeing that scene, she barged into the Andrew home, where she eventually shot Phil, then a 20-year-old college student, and killed herself.

I wondered what Phil Andrew, who went on to become a violence prevention advocate, would say about the fact that, 34 years later, mass shootings have become relatively commonplace. Surely he’d agree with me that no 21st-century civilian needs a gun? As it turns out, not exactly. Here’s an edited version of our conversation.

Deanna Isaacs: What about this latest incident?

Phil Andrew: This is similar to the attacks we’ve seen throughout the country: somebody who has demonstrated dangerous behavior and accessed a dangerous weapon has perpetrated an unspeakable attack. The moment a dangerous person gets hold of the dangerous weaponry that we continue to make easily available, it’s already worst-case scenario.

We now have an estimated 400 million guns in our country. What we need is for us as communities to insist that guns that are kept in private possession be locked up and stowed away from young people and dangerous people.

And we need to ban assault weapons. That is the weapon of choice now for mass violence.

So you’re not saying that we should ban all guns?

No, we should ban the high-capacity military-style assault weapons and we should have universal background checks that dig into youth and mental health records. And we should have red-flag laws to take guns away from dangerous people.

Yes, she bought three handguns legally at a nearby store where the store owner knew it was unusual and actually alerted law enforcement. But at the time Illinois didn’t have a red-flag law; they couldn’t take the guns from her. And that’s where all the injury came from. If you remember that day—she attacked the community with a cyanide gas device, she attacked a family with a fire, she sent poisons around the North Shore. But the only thing that caused death and serious injury were the firearms.

And that continues to be the case in the United States, where firearm violence is the leading cause of death among children. It continues to take about 16 veterans a day due to suicide, and mass violence is driving our consciousness and our fear in public places.

We’re the only industrialized country that tolerates this, allowing an industry to sort of self-regulate, an industry that makes guns to have disproportionate influence. In the end this is about money and greed driving the public safety discussion.

By self-regulating, you mean through influence?

Yes. The NRA before the 1970s actually sponsored a lot of firearm violence prevention legislation, recognizing that they were really there to promote safety and conservation. But in the mid-70s, the NRA was taken over by the gun industry. And ever since then the leadership has had an extremist agenda, promoting easy access to firearms despite its public safety threat.

Wasn’t there a federal ban on assault weapons at one point?

There was a federal ban, and it proved very effective. And then it sunset, under the second Bush administration, and that’s when we started seeing greater use of assault weapons in these mass violence scenarios.

But I think we’re seeing a turning point. It’s not just a few people—the polling data, the election cycles are showing that this is an important issue to the American people, that we need to deal with gun violence.

But it seems that shootings are only increasing.

We had a pandemic. We had about 20 million more firearms infused into the system over these last two years, and we had a number of restrictions pulled back. And, unfortunately, we’ve got a Supreme Court that’s out of step with the jurisprudence, public opinion, and public safety.