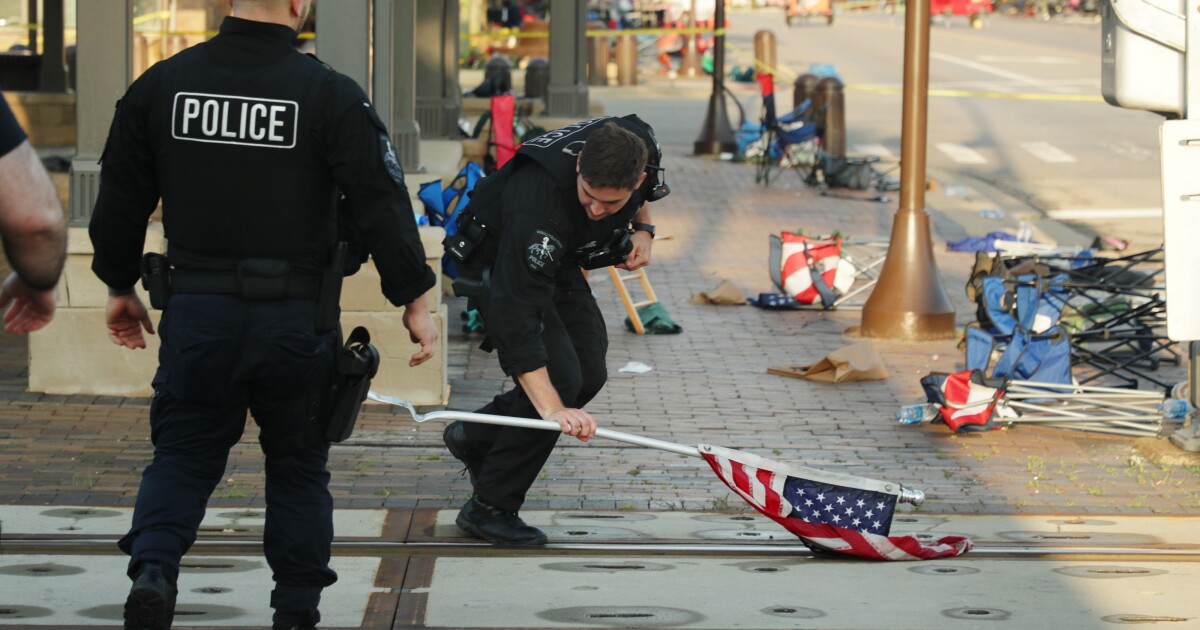 Perhaps the most heart-rending story coming out of the July 4 massacre in Highland Park, Ill., is that of Aidan McCarthy, the 2-year-old boy found at the scene of the tragedy looking for his parents.

They were among the seven people killed by a rooftop sniper as they watched an Independence Day parade.

Aiden is now in the care of his grandparents. He’s also the beneficiary of a GoFundMe campaign that, as of this writing, has raised $2.3 million from 42,600 donations.

Instead of the state being the arbiter of who gets to own which sorts of guns, the market plays the role.

Those circumstances underscore not only the horror and tragedy of the July 4 attack, but the question about who should pay the cost for America’s seemingly endless torrent of gun violence — as well as the feebleness of the official response to the crisis.

If politicians remain in thrall to the National Rifle Assn. and therefore are unwilling to take action against gun violence, perhaps the market can step in.

That’s the idea behind legislation being pondered in several states, including California, to require gun owners to carry liability insurance.

Only one such law has been passed thus far — by the city of San Jose, which was the scene of a mass shooting at a regional rail yard in May 2021 in which 10 people died, including the shooter. It enacted an insurance mandate in February.

Even before the city ordinance was passed, it came under attack from gun rights advocates; their lawsuit seeking to invalidate the ordinance is currently before U.S. Judge Beth Labson Freeman of San Jose. The ordinance requires all gun owners to carry liability insurance “specifically covering losses or damages resulting from any accidental use of the Firearm, including but not limited to death, injury or property damage.” The ordinance also imposes an annual fee expected to be about $25 on gun owners to fund a municipal program for “gun harm reduction.”

A measure requiring liability coverage of at least $1 million has been introduced in New York state.

These measures have several goals. The most obvious is to provide that gun owners, rather than victims of shootings or the public, bear the costs of gun violence. Another is in effect to outsource the regulation of gun safety to the private market, and to do so in ways that are immune from constitutional challenges.

“Government may not be the best entity to do the regulating,” says San Jose Mayor Sam Liccardo. “Sometimes the private sector can do so more effectively.”

The most often cited analogue is auto safety. The San Jose ordinance states that auto insurance used premiums to “reward good driving and incentivize use of airbags and other safety features,” contributing to a reduction in auto fatalities per mile by nearly 80% from 1967 through 2019.

“Insurers have a real incentive to understand the risks, what increases the risk of a car accident, what steps can be taken to reduce it, and then to decide whether they underwrite the cost,” says Peter Kochenburger, an expert in insurance law at the University of Connecticut School of Law. “The hope is that insurers will serve a private governance or private regulatory function — private because they can’t tell anyone what to do, they can just make decisions about what to insure and at what price.”

This doesn’t place insurers in the role of police, says Heidi Li Feldman of Georgetown University Law Center, but rather “privatizes the promotion of gun safety…. We create market mechanisms that allow people some range of choice, and let the market decide what the costs will be for people who want to engage in risky behavior. We do this with all sorts of products.”

The makers of products carrying inherent dangers, whether baby cribs or gas heaters, can be sued for injuries they cause. That legal exposure is reflected in the cost of the products themselves.

Gun manufacturers, however, have been largely immunized from the same exposure by the Protection of Lawful Commerce in Arms Act, or PLCAA, a notorious law that in effect barred civil lawsuits against gun manufacturers for the “criminal or unlawful misuse” of their products.

The law was signed by George W. Bush in 2005 after it had been championed by the NRA, which declared its passage “an historic victory.”

“Given the power of the gun lobby,” Feldman says, “one alternative is to make gun owners, who are also in the potential chain of violence, bear some of the cost of trying to prevent that violence…. We are asking that people participate in a market mechanism that accurately reflects the dangers and costs of owning guns and particular types of guns.”

With only the San Jose law on the books, it isn’t yet clear how insurers will assess those costs. Conceivably, however, they could base premiums for liability coverage on considerations already applied to homeowner policies (such as whether a home has known perils such as a pool or trampoline or dog breeds known for biting) or auto policies (such as whether a driver has a record of speeding or has taken and passed a driver training course).

Insurers might consider the types of guns in a household, whether they are secured in a safe, and whether the household includes people known to show an elevated risk of violence, whether because of a police record or age and gender.

Laws like San Jose’s and the proposals in California and other states might not keep events like the July 4 massacre in Highland Park from recurring, once a determined killer got his or her hands on a weapon. But they might limit that access by driving up the cost of ownership: Higher premiums might lead gun buyers to think twice about acquiring an assault weapon or multiple weapons or place the price of those weapons out of reach.

Up to now, insurers haven’t made much of an effort to develop data on what factors contribute to a higher probability of misuse. That’s largely because they haven’t needed to. “What creates insurers’ desire or need for information is what risks they have,” Kochenburger told me. “In liability insurance, you can only be sued if the law says you’re liable.”

Gun owners’ liability for how their guns are used isn’t deeply ingrained in the law, so violent outcomes don’t necessarily present a liability underwriting issue.

The vast majority of firearm deaths, according to the Centers for Disease Control and Prevention, are suicides (53.7%) or homicides (42.9%). Only about 1.2% — or 535 deaths out of a total of 45,222 firearm deaths in 2020 — are classified as “unintentional,” the category that might most commonly be covered by insurance.

“Insurance companies have minimal skin in this game,” Kochenburger says.

An increasingly important consideration is how the Supreme Court might view gun insurance mandates. Under normal circumstances, Feldman says, these laws would be largely unchallenged.

“Instead of the state being the arbiter of who gets to own which sorts of guns, the market plays the role,” she says. “Either it becomes prohibitively expensive for people to buy certain types of insurance, or prohibitively expensive for insurers to offer certain types of insurance. That’s a very small-d-democratic way to deal with an activity that throws off a lot of risk on other people.”

The Supreme Court’s recent 2nd Amendment cases, especially its June 23 decision overturning a 117-year-old New York law regulating permits for the carrying of guns in public, create “a lot of uncertainty about what this court would do,” Feldman says. “That makes people nervous about enacting these laws. You’re a city, you don’t have a lot of money, you don’t really want to get caught up in constitutional litigation. That might deter you from passing the law.”

As it happens, the plaintiffs in the lawsuit challenging the San Jose ordinance cited the Supreme Court decision the day after it was handed down. The judge has given the plaintiffs and the city until Friday to submit briefs on its relevance. The city has said in the past that its rules don’t impinge on 2nd Amendment rights because they don’t involve any factors “directly affecting residents’ ability to keep and bear arms for self-defense.”

Until the Supreme Court ruling, interest in gun liability laws was rising. The seemingly impermeable protection PLCAA gave gun manufacturers had even been broken by a lawsuit brought by parents of the victims of the 2012 Sandy Hook Elementary School shooting in Connecticut, which took the lives of 20 children ages 6 and 7, and six adults. Remington Arms, which made the assault weapon used in the massacre, settled with the plaintiffs for $73 million after courts ruled that state law was not preempted by PLCAA.

But the desperation to find some way to stem gun violence may carry the day.

“Obviously, the Supreme Court decision darkens the sky over gun regulation nationally,” Liccardo told me. “But the court hasn’t said anything to suggest that we cannot enact legislation to make gun ownership safer.”

BOOR REVIEW: ‘American Rifle: The Case for the AR-15″
Make-up free Jennifer Lawrence steps out with baby son Cy for stroll in New York City
SHEILA NAZARIAN: It’s Time For Jews To Take Advantage Of The Second Amendment
Senator Chris Murphy: ‘victory after victory’ is coming for US gun control | US gun control
Another mass shooting puts gun safety front and center at the Colorado Capitol