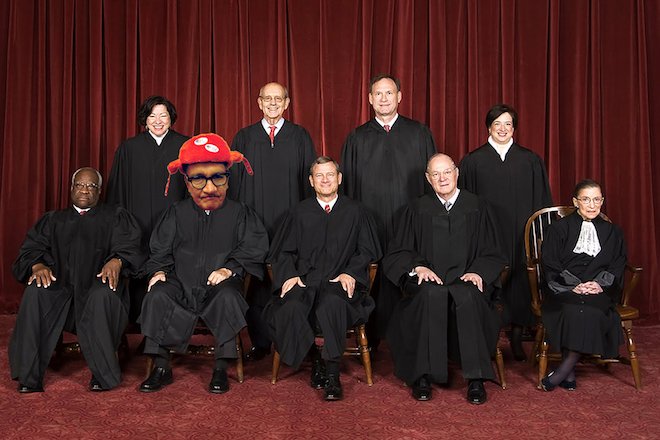 I’m Art Kumbalek and man oh manischewitz what a world, ain’a? And so another Independence Day has come and gone, this past one focking complete with some douchebag’s celebration of the bullshit-interpretation of the Second ferkakta Amendment “rights” from the Constitution, so’s to constitutionally wreak havoc from a rooftop so’s to wreak deathly “constitutional rights” upon the parade-goers down there by the Highland Park, Ill., what the fock.

And where was the “good guy with a gun,” who according to the NRA mantra would stop the “bad guy with a gun”? Perhaps the good guy was the cargo-shorted dad pushing his kid’s stroller toward the July 4th ice cream stand, and not quite ready to return fire from his dinky dad-gun toward a Second-Amendment patriot wielding the AR-15 five-floors up on a rooftop nearby. God bless America, ain’a?

Yeah, the old slogan: “When guns are outlawed, only outlaws will have guns.” And now from our crap-fantastic Supreme Court, their June decision of this from The New York Times:

Swell. Now those NY Met fans come the end of September when a customary late-season swoon has blown their playoff chances visit the Macy’s to purchase and replace shit-stained underwear due to another year of dashed desires, they can register their dissatisfaction through the end of a gun barrel when the clerk tells them they’re all out of BVDs in their size, you think?

Jeez louise, this “Supreme” Court. Thank the lord of laws that this barge of judicial garbage cannot set sail again until the first week of October. Yeah, they get a break/recess, just like they’re a bunch of school teachers who get a summer-plus off, except unlike your stressed-but-good school teacher, these court clowns pull down a cool salary of $265,000 each and every year for a lifetime, plus a boatload of dough from speaking fees delivered at some fancy-schmancy legal banquet whilst the school teacher makes about a buck two-eighty yearly before deducting the cost of crayons and lunch for the kids They’ve “chosen” to spend out-of-pocket ’cause states’ Republican legislatures don’t want to flip money to school districts that fancy public education and do not fancy the notion that Jesus is a Founding Father of the Declaration of Independence and the only reason you don’t see “Jesus H. Christ” signed at the bottom of the document is ’cause some radical left-wing Democrat trickster filled the quill that Jesus used to sign with disappearing ink, what the fock

Stay on top of the news of the day

Subscribe to our free, daily e-newsletter to get Milwaukee’s latest local news, restaurants, music, arts and entertainment and events delivered right to your inbox every weekday, plus a bonus Week in Review email on Saturdays.

And speaking of Supreme Court members and possible replacements, say if a Clarence Thomas should choke on a chicken bone or the righteously douchebag Sam Alito should be rightfully impeached and aborted, I’d offer to toss my orange hat into that ring of fire and brimstone. I’m right now sending a note to President Joe that if he finds himself fortunate to replace one of those conservative focksticks on the bench, I’m his guy.

Qualifications? I know from the bench—my school days basketball career was nothing but the bench, what the fock. And, several times during my career as an adult American voter, I have been nominated for reserve judicial jury duty. I never did get called, but I’m thinking that my willingness to serve so’s to dispense some hardline justice at the drop of a hat should fancy any president’s eye for an eye.

(You know, constitutionally you don’t have to be lawyer to be on the Supreme Court. And even if you were, let me ask you this: What do you call a lawyer who doesn’t know the law? “A judge.” Ba-ding!)

OK, I figure I should strike a positive note here, so I’ll mention that the Summerfest extravaganza is back on the boards for the pleasure of the young and semi-semi-young people. And that’s a nice thing, I kid you not.

But the answer would be “no-how” in case you were wondering if I had the gas to haul my sorry ass over to that shebang blaring away down by the lakefront there. Yeah yeah, I hear that the festive operators seek to charm an older, grayer crowd by engaging a handful of musicians whose first big break came before the FM radio was discovered; but I’m not tuning in, no sir.

If the entertainment entrepreneurs really want to snag AARP-sters like me and my gang to come on down to spend some dollars, they need once and for all to heed my perennial proposal ad nauseam that they finally focking create space for The Topless/Bourbon Tent for crying out loud, ’cause what over-middle-aged white guy doesn’t enjoy the gentlemanly intoxication provided by the exotic dance? Hey you tell me

However, my buddy Little Jimmy Iodine was down to the fest last weekend. He likes to go ’cause if you’re a guy whose hobby is to look for loose change that had been clumsily pocketed, an outdoor festival is a veritable silver mine, I kid you not. So he got down there at noon on Thursday ’cause his nephew’s band, Puke Brain (an acoustic combo ’cause no sane person would ever grant them the use of electricity) was to be entertaining over by some dinky side stage; however, a snafu in the parking lot prevented the lads from fulfilling their contract. Jimmy says the bass player locked his keys in the car and it took them two hours to get the drummer out.

Ba-ding! ’cause I’m Art Kumbalek and I told you so.