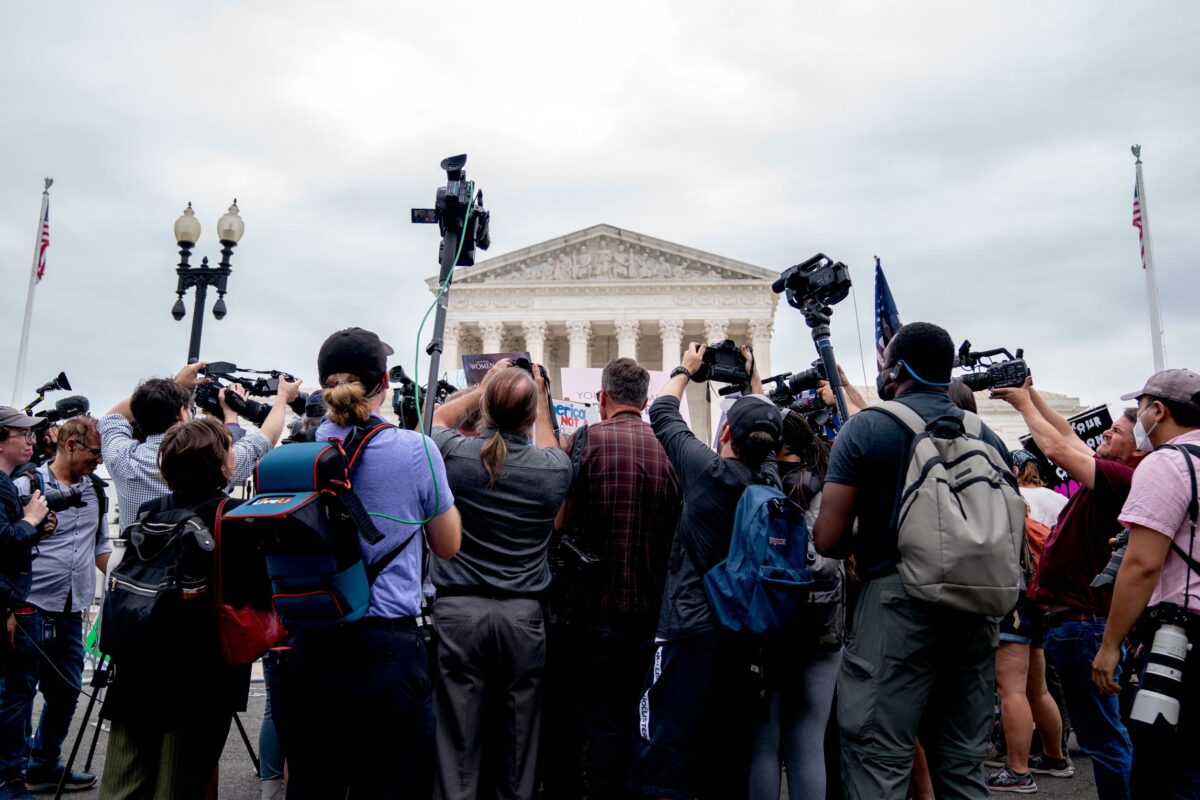 In modern U.S. history, you can count on one hand the number of Supreme Court cases that clarify what the Second Amendment really means. The Bruen ruling is one of them.

In the recent ruling for New York State Rifle and Pistol Association, Inc. v. Bruen, the court spoke, for the first time, that the Second Amendment protects an individual right to carry a handgun for self-defense in public.

The ruling directly struck down New York’s concealed carry law and endangered similar laws in other states, drawing praise from gun rights communities and resistance from politicians in impacted states.

The Supreme Court ruling followed a string of mass shootings across the country, and many states have vowed to circumvent the Bruen ruling by passing tougher gun laws.

However, going forward, for any new gun laws—or even existing gun laws—to stand in court, they must pass a new test held by the Bruen ruling.

Governments must now look to history—and history only—to justify gun laws in court. They can no longer, as they have overwhelmingly done in the past decade, justify gun laws as a necessary means to control crime.

This new standard will reset the nation’s gun law litigations for generations to come.

For a long time, the Second Amendment was understood as a right exclusive to the militia, according to Robert Spitzer, a distinguished service professor emeritus of political science at the State University of New York at Cortland and author of several books on gun rights and regulations.

The plaintiff in the landmark case, Dick Heller, was a D.C. special police officer who was authorized to carry a handgun while on duty. When he applied for a license for a handgun he wished to keep at home, he was denied. Heller sued the District of Columbia, arguing its license ordinance violated his Second Amendment right.

Two years later, the Supreme Court extended the same ruling to all states (D.C. is not a state so there was uncertainty at the time about the scope of the Heller ruling) through the landmark McDonald v. Chicago.

Otis McDonald, a retired African American engineer, had seen a crime surge in his Chicago neighborhood and wished to keep a handgun at home for self-defense. However, he couldn’t legally do so under the city’s handgun ban. So, McDonald joined three other Chicago residents and sued the city.

Then came along the landmark Bruen ruling under the conservative-majority Supreme Court.

“Now the Supreme Court says that average people have a right to carry a gun not just at home, but also out in society. It is a dramatic and significant expansion of the Second Amendment right,” Spitzer told The Epoch Times.

According to Spitzer, three interwoven forces have been driving the expansion of gun rights in the past decades: gun rights enthusiasts at the grassroots level, gun rights associations such as the National Rifle Association, and a network of conservative legal professionals.

In the Bruen case, petitioners Brandon Koch and Robert Nash both applied for unrestricted licenses in New York to carry a handgun in public for self-defense. However, the state police found both applicants short of the “special need” requirement and denied their applications.

Under New York law at the time, applicants must demonstrate a special need for self-protection that is distinguishable from that of the general community.

During the oral argument (pdf), New York’s Solicitor General Barbara Underwood was asked whether a person who works at night and must walk through a dark, high-crime area to get home would be granted a concealed carry permit.

Underwood replied, in general, no.

She said the applicant must show more proof, such as he or she had been singled out for attack.

Aside from New York, five other states (New Jersey, California, Hawaii, Maryland, and Massachusetts) and the District of Columbia have similar “special need” requirements for concealed carry permits.

Justice Clarence Thomas wrote in the majority opinion of the Bruen case: “We know of no other constitutional right that an individual may exercise only after demonstrating to government officers some special need.”

The news excited the gun rights community in may-issue states and beyond. In New Jersey, the Second Amendment Society receives hundreds of inquiries per day asking how to apply for concealed carry permits. One instructor who works closely with the organization sold out three months of concealed carry classes in one day.

Second Amendment Society President Alex Roubian told The Epoch Times: “For decades, we have been reiterating this, and it was demoralizing to have government agents and judges that do not know how to abide by the Constitution and uphold this ridiculous law. We are happy that the Supreme Court of the United States of America has finally struck it down.”

The ruling also met with strong opposition from government officials in may-issue states, who cried that the Supreme Court restricted their abilities to tackle gun violence.

New York Gov. Kathy Hochul, a Democrat, said at a press conference, “Our states and our governors have a moral responsibility to do what we can and have laws that protect our citizens because of what is going on—the insanity of the gun culture that has now possessed everyone all the way up to even to the Supreme Court.”

On July 1, New York passed a revised concealed carry law within hours of its introduction. The new law removed the unconstitutional “proper cause” clause, added a slew of new requirements, and drastically expanded gun-free zones.

Gun Owners of America lawyer Stephen Stamboulieh told The Epoch Times that it is very likely other may-issue states will follow in New York’s footsteps.

“Make no mistake, New York and all these other places that do not want their citizens to keep and bear arms are going to do everything in their power to consistently fight against the Second Amendment,” Stamboulieh said.

“As soon as we figure out what they are doing, we stand ready to sue them. It’s going to take years to play out. It’s not going to be fast,” he added.

Justice Thomas, in the majority opinion of the Bruen case, acknowledged that the right to carry handguns in public for self-defense is subject to reasonable regulations.

For instance, historical evidence suggests that it has long been the nation’s tradition to ban firearms in “sensitive places” such as schools and government buildings, according to the opinion.

Stamboulieh said the definition of “sensitive places” will likely be a hot spot for future litigation.

“New York has this idea that Times Square is a sensitive place, but there is nothing in Bruen that says just because you have some urban area that is highly populated, you can start randomly deeming it a sensitive place,” he said.

The Bruen ruling also came against the backdrop of mass shootings across the country and a renewed legislative push for stricter gun laws.

Newsom said at a press conference that as the Supreme Court rolls back gun regulations, California would double down on them.

“Even if my state is forced to comply with the Bruen ruling, they’ll pass more laws that will restrict us further. So this fight is not going to be done in the next couple of weeks, or even months, maybe even years,” Wallace said.

“We are prepared for that fight. As we told our members, as exciting as the Supreme Court decision was, the real work in Massachusetts now starts,” he added.

And the Bruen ruling just set a new game rule for that fight.

For the past decade, lower-court judges overwhelmingly relied on an interest-balancing test in deciding lawsuits challenging gun laws. The test involves two steps.

First, the judges decide if the regulation in question falls within the scope of the Second Amendment right. If the answer is yes, they go to the next step, where they weigh the governmental interest (usually in protecting public safety) against the regulatory burden on the right.

This test usually led to rulings in favor of the government, according to Epoch Times interviews with several legal professionals.

“It’s hard to think of one where the government hasn’t prevailed. Except for a few exceptions, everybody else lost. Because under the balancing test, the government just comes in and says ‘public safety,’ and that’s good enough. That is the end of the argument,” Maryland Shall Issue President and lawyer Mark Pennak said.

The United States Court of Appeals for the Ninth Circuit (which covers western coast states and beyond) stood out among all. The court handled at least 50 lawsuits challenging gun regulations in the past decade—more than any other court of appeals—which were all ultimately ruled in favor of the government, according to Judge Lawrence VanDyke in the Duncan v. Bonta ruling (pdf).

Justice Thomas in the majority opinion in the Bruen ruling, said, “We declined to engage in means-end scrutiny (another name for the interest-balancing test) because ‘[t]he very enumeration of the right takes out of the hands of the government—even the Third Branch of Government—the power to decide on a case-by-case basis whether the right is really worth insisting upon [citation from the Heller ruling.]’”

Instead, the court says because the Second Amendment codifies a preexisting right, it is more legitimate to rely on history and tradition to inform the constitutional scope of gun regulations, according to the opinion.

The standard change will significantly change the face of gun law litigation in the country, according to National Shooting Sports Foundation general counsel Larry Keane.

“Going forward there will be a lot of litigations, and plaintiffs challenging gun restrictions are in a much better position, while the government is in a much worse position to justify infringement on the Second Amendment right,” Keane told The Epoch Times.

“Frankly, this decision on proper test has far more broad-reaching implications for the Second Amendment right than just the New York law being struck down,” he added.

In New Jersey, gun rights advocate Roubian plans to take full advantage of the new standard. “We are looking to challenge every single one of New Jersey’s unconstitutional gun laws, and we are confident that the courts will overturn a majority, if not all, of them,” Roubian told The Epoch Times.

In fact, the standard change has already affected existing lawsuits. The Supreme Court just remanded several cases back to lower courts. These cases had been decided on the now-rejected interest-balancing test and need review under the new standard.

As for professor Spitzer, he thinks the new standard favors neither side.

“If you read America’s gun law history, it seems to provide a strong basis for having fairly strict laws to protect the public from the harm that can be caused by guns. So it doesn’t necessarily make it harder for lawmakers to regulate guns. It is just a different way of doing it,” Spizter told The Epoch Times.

Cara is a Chicago-based Epoch Times reporter. She can be reached at cara.ding@epochtimes.com.