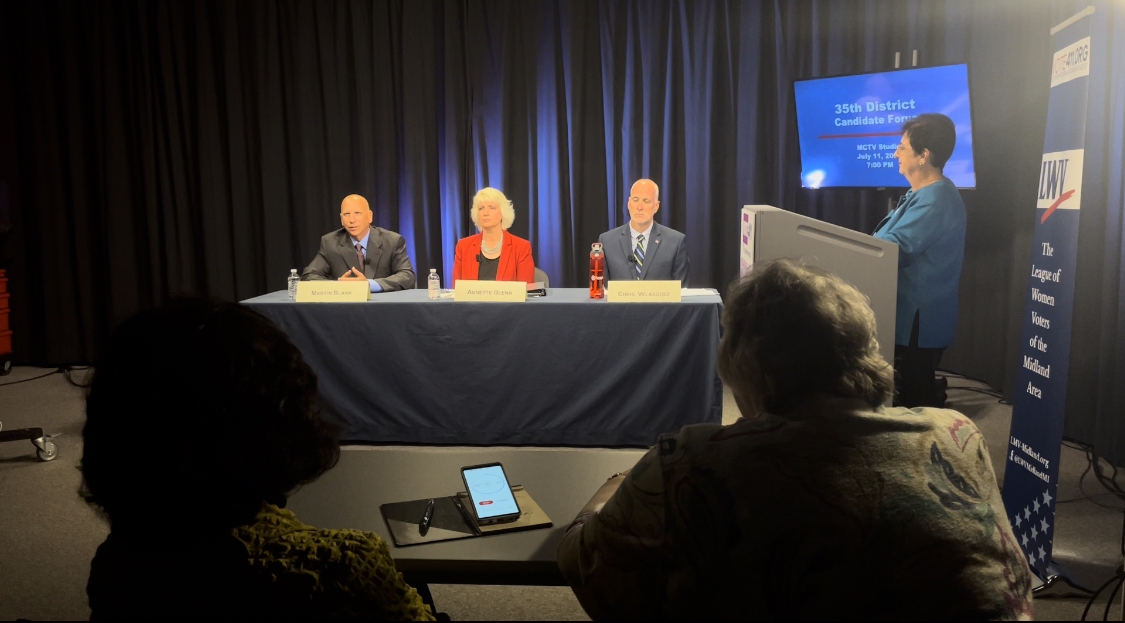 MIDLAND — Private-public partnerships are one of the recently proposed solutions to address gun violence in the 35th State Senate race.

Republican candidate Christian Velasquez discussed this issue, among several others, Monday at a primary election forum held by the Midland Area League of Voters.

“The government can talk about it, but we really need to be focusing on how we get community together to drive these solutions, ” Velasquez said, when replying to a question of what gun laws he’d support or oppose.

The League of Women Voters is a nonpartisan political organization, which aims to help facilitate informed voters with active participation in government. On Monday, the League began its effort to host a series of forums, beginning with Republican candidates of the 35th State Senate district.

However, candidate Tim Kelly on Friday announced in a press release that he rescinded commitments to participate in the forum due to concerns of partisanship.

Despite a call to his running mates to drop out of the forum, Rep. Annette Glenn, Martin Blank and Velasquez were present at the Monday forum.

About 25 attendees watched the broadcast at the MCTV Studio, which is located in the lower level of the Grace A. Dow Memorial Library. The event series will be rebroadcast throughout local TV channels and YouTube. Questions to candidates were developed by the League of Women Voters. Participants had two minutes to respond, with one minute later allotted for a reply.

The forum was moderated by President Kim Steinke with the Midland Area organization. In response to Steinke’s question, “in light of the recent Supreme Court decision, what changes to the gun laws in our state, would you support or oppose?” Glenn said it’s aligned with Michigan’s “shall-issue” status, which she supports.

“I grew up in a time period when it was very common for kids to just have their rifles in the back of their pickups and after school, they’d go hunting,” she said. “I know that times have changed … but I am a firm supporter of the Second Amendment.”

Glenn shared that she is endorsed by the National Rifle Association. Velasquez acknowledged his high-level contributions to the association.

When asked about positions on carbon-neutrality, economy-wide, Blank said he supports proposals to safeguard the environment. Right now, he said, rising fuel prices have taught voters the lessons of a fragile energy system.

The organization has shared online information on primary election candidates for races at the federal, state and local levels at www.VOTE411.org.

MSNBC Bewails Lack of Weapons Ban: “What’s It Going to Take?”
READER’S EDITORIAL: THE GOP AND GUNS
Transparency, gun permits, holiday safety
The question is not, ‘What is it about Colorado?’ | John Moore | Arts & Entertainment
Ron Porter: Cutting the deadly threads is difficult