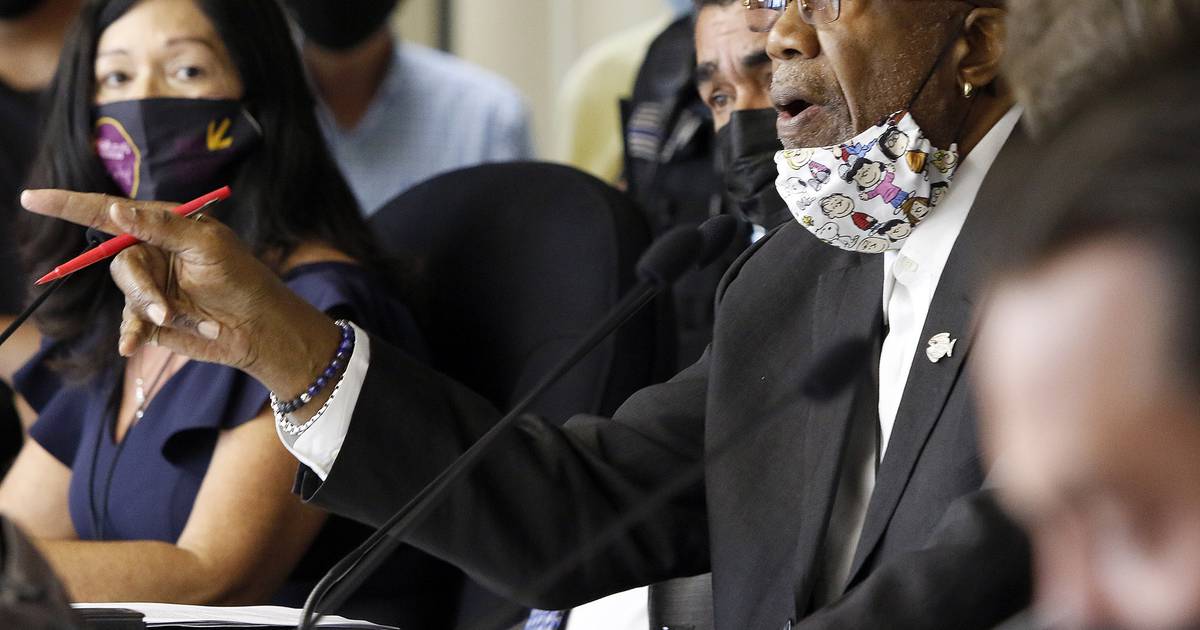 The day after four people were shot within an evening in Gary, only two Lake County Council members agreed Tuesday to join an ad-hoc committee to address gun violence.

Councilman Charlie Brown, D-Gary, and Councilwoman Christine Cid, D-East Chicago, agreed to be members of the ad-hoc committee to look into what the seven-member council could do about gun violence and the sale of military-style guns.

In June, Brown urged the council to ban military-style gun sales at the Lake County Fairground gun shows. He called for the council to draft an ordinance to be drafted for the July meeting following two shootings in Gary — after a graduation ceremony for West Side Leadership Academy and at Playo’s nightclub.

But, Brown said last week that instead of an ordinance he would propose the formation of the committee because council members expressed concern about addressing the issue months away from the election.

Brown called for the creation of the committee Tuesday to look into “what can we do as a council to minimize the gun violence in Lake County.”

“I know that it’s a very, very touchy issue about guns and whether we’re going to deprive someone of guns as their personal protection. My major interest is in these multiple shooting rifles and weapons,” Brown said.

While the Indiana General Assembly “has tied our hands,” Brown said, he does not believe in giving up.

“I know that there is some kind of opening or something that we can do to minimize the multiple deaths and injuries in Lake County relative to these high powered guns that shoot multiple times,” Brown said. “I think we should at least indicate to our constituents that we’re looking at that and we will attempt to do as much as we can.”

Jody Madeira, professor of law at Indiana University Bloomington, said previously it’s likely such an ordinance would be unlawful because it would be a regulation of firearms, ammunition or accessories — which is illegal under state law. The legal way to stop the sale of military-style guns would be if the operator of the gun show made that decision, she said.

Councilman Dan Dernulc, R-Highland, said he’s not interested in joining the committee because he has “other things going on right now.” Dernulc, who is running for state senate, said there is “a constitutional issue” with guns.

“I think all of us out there do not want gun violence. But I also don’t want to infringe on people’s rights. I don’t mind a committee being brought in and being formed, but that’s one thing that we have to be cognizant of,” Dernulc said.

Cid said the issue isn’t the Second Amendment but gun violence. People should not have to live in fear to go to school or a parade or other places, she said.

“Something has to be done. We can’t just tie our hands behind our backs and say ‘Well, the Second Amendment is there’ and just let things be as they are,” Cid said. “There has to be some solution, even if it’s minor.”

Following the overturning of Roe v. Wade, women can’t make decisions about their bodies “to save the unborn,” Cid said. But she questioned what is being done about gun violence to protect lives.

Brown said he’s not asking the council to violate the Constitution, but that the Second Amendment was drafted when people had muskets to protect their homes, Brown said.

“Nobody in the world … can convince me that the intent was that someone has a weapon like the AR-15 that is just ripping bodies apart and killing people on a regular basis. My only intent is what can we do to minimize that number. I don’t want to take away anybody’s rights whatsoever,” Brown said.

The council voted 7-0 to create the committee, but only Brown and Cid agreed Tuesday to be members of the committee.

When the committee meets, it would be required to give public notice of the meeting, said council president Ted Bilski, D-Hobart. The committee can’t take action but it can present information for the council to consider, he said.

After the vote, five people addressed the council about the creation of the committee.

Mike Lee, an activist with the NRA, said military-style guns account for 25% of gun violence in the country. The problem with gun violence are criminals, he said.

“Repeat offenders who don’t get charged, that’s where the problem is. It doesn’t lie in legal gun owners,” Lee said.

Rebecca Wyatt, a representative with the Interfaith Action Network, said she was disappointed that only two council members agreed to join the committee. People should not be fearful about gun violence while out in the community, she said.

“This has gone on way too long. We as a community want it to stop and we want you all to help us make it stop, whatever way there is,” Wyatt said. “It’s time to act. I respectfully as the council to do whatever it can to support this subcommittee when it comes back to you with recommendations.”

Peter O’Day, a member of the Interfaith Action Network, said he’s also disappointed that only two council members agreed to be on the committee.

O’Day said he has been a gun owner for the majority of his life, and that he’s been a member of the NRA since about 1974. What he’s seen in recent years is a cultural change regarding guns, O’Day said.

“Where guns are a tool to go hunt and just defend your home with a shot gun has become, in my opinion, a badge of masculinity,” O’Day said. “That cultural change is taking place. I’ve watched it in the NRA. If you look at the NRA’s magazine in 1974 and compare it to today, there’s no relationship.”

While the council may not be able to take legal action, O’Day said, it could address the culture around guns.

“Please try to do whatever you can about this culture of violence,” he said. “Every little bit helps.”