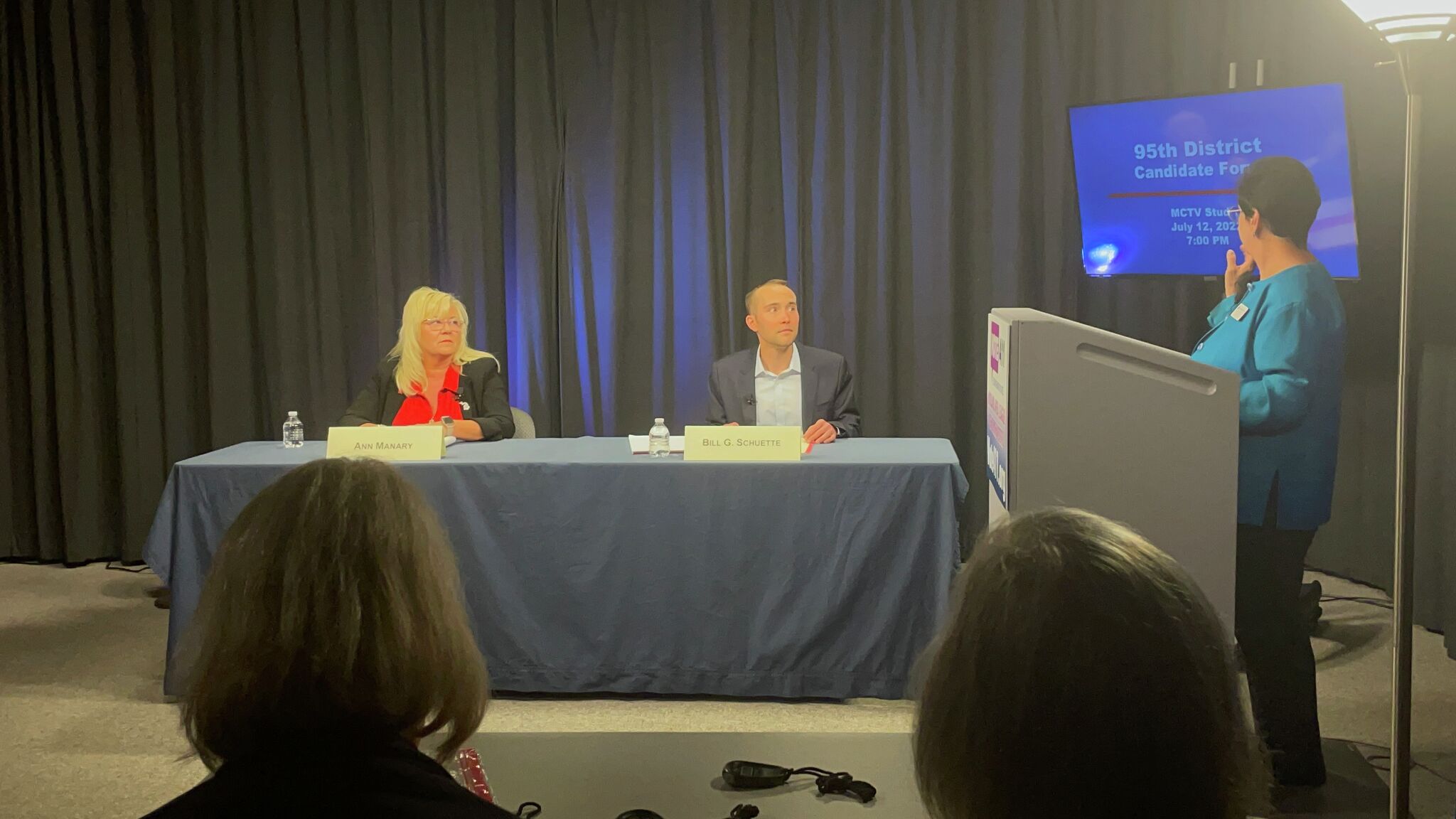 MIDLAND — Ann Manary supports the regulation of assault weapons, while Bill G. Schuette is advocating for “red tape” to halt.

“There are things that we can do and that we need to do,” she said, in a reply to a question of what she would support in terms of gun laws. “We need to address the issues, mental health is one of the biggest ones.”

This issue, among several others, was discussed Tuesday, during a forum with two of three Republican candidates vying for the 95th State House district. The forum was moderated by President Kim Steinke with the Midland Area League of Women Voters. About 25 attendees watched the broadcast at the MCTV Studio, which is located in the lower level of the Grace A. Dow Memorial Library.

In response to the same question about gun laws, Schuette said that strict gun laws lead to more crime with an example of Chicago.

According to the Associated Press, states like California and New York generally have stricter gun laws than Illinois. Federal data shows that California, Illinois and New York experience lower per capita firearm death rates than Texas, which has less stringent gun laws.

“I’m opposed to any new gun control,” he said. “We already have hundreds of gun laws that are on the books that we are not doing a good job enforcing.”

Schuette said he has been endorsed by the National Rifle Association.

“Let’s not look at putting more government red tape and more government regulations, when they are not doing a good job right now,” he later continued, adding he would support increased security measures in schools, which have been targets of mass shootings.

Schuette and Manary both said they support the Second Amendment. They agreed mental health measures, among others, play a role in the statewide conversation on gun violence.

However, Manary said this “can, and should be” a bipartisan effort.

“I don’t feel that there’s a need for anyone to own an assault weapon, unless you’re in the military,” she said. “That’s not a Republican opinion, it’s my own personal opinion.”

In terms of addressing poverty within the 95th District, which will cover all of Midland County and a few townships in Gladwin County, Schuette said “times are tough for many across the district.” He believes the best poverty reduction strategy is creating more “good paying” jobs.

“The price of gas is skyrocketing, same with the price of groceries,” Schuette said. “That’s making it tough to make ends meet. When that’s the case … I want to give every Michigander a pay raise. We can accomplish that by cutting your taxes (to) put more of your money back in your wallet.”

Manary said the district needs to provide jobs at a sustainable living, “not just a $10 per hour job.”

“You have to provide people with skills to be able to get those jobs that will sustain them throughout their entire career,” she said.

A third Republican candidate, Charles McGinnis Jr., did not participate in the Tuesday forum. He withdrew from participation prior to the event on Tuesday, according to the moderator.

In opening statements, Schuette described himself as a young, energetic candidate with a fresh approach.

Manary, who is currently the Midland County Clerk, described herself as a hardworking public servant.

The candidate selected by voters in the Aug. 2 Republican Primary will be on the November general election ballot. Democratic candidates are Matthew Dawson and Larry Grell in this race. For more on these candidates, visit ourmidland.com.

The event series will be rebroadcast throughout local TV channels and YouTube. Questions to candidates were developed by the League of Women Voters. Participants had two minutes to respond, with one minute later allotted for a reply.

The League of Women Voters is a nonpartisan political organization, which aims to help facilitate informed voters with active participation in government. The organization does not support nor oppose candidates.

The organization has shared online information on primary election candidates for races at the federal, state and local levels at www.VOTE411.org.