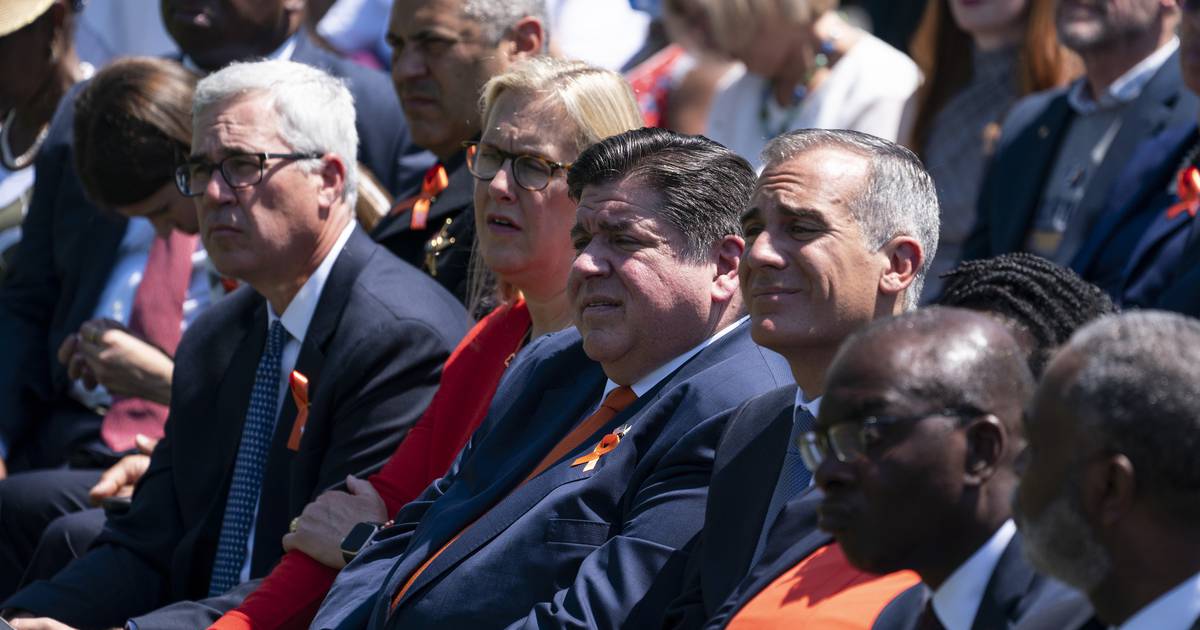 Media coverage of the fallout from recent mass shootings suggests growing numbers of Americans are fed up with gun violence and ready to demand change.

The shifting public sentiment could eventually reduce the numbers of people killed and wounded by gunfire every year in Chicago and south suburbs like Harvey, where shooters killed 30 people in 2021.

Suburban Chicago moms marched Wednesday in Washington, D.C. They called for Congress to ban assault weapons. A young man is accused of killing seven and wounding dozens more during a July 4 parade in Highland Park. The horrific event jolted some parents to action.

“We’re not going to just sit in depression and sorrow,” Kitty Brandtner of Winnetka told the Chicago Tribune. “We’re going to do something.”

Parents from Uvalde, Texas, joined them in the march in the nation’s capital. People there are outraged in the wake of a May 24 mass shooting. Video released Tuesday showed police waiting in a hallway for 77 minutes before entering an unlocked classroom and killing a gunman who had murdered 19 children and two teachers.

The Austin American-Statesman newspaper and KVUE-TV triggered debate over the release of surveillance video from inside Robb Elementary School. The news outlets removed the sounds of children screaming as the gunman entered their classroom to massacre them.

“We consider this too graphic,” the newspaper’s executive editor wrote.

The video’s release prompted renewed scrutiny of the delayed law enforcement response to the active shooter. The disturbing scenes added fresh anguish to a community reeling from tragedy and heartbreak.

The decision to edit out the screams of children in their final moments of life also generated debate about graphic depictions of the effects of gun violence. Generally speaking, you don’t publicly see pictures or video showing mass shootings.

The public is spared having to comprehend the gruesome reality that occurred at Sandy Hook Elementary School in Newtown, Connecticut; at Marjory Stoneman Douglas High School in Parkland, Florida; at a music festival in Las Vegas, Nevada; or other notorious crime scenes.

Some believe Americans need to see and hear how military weapons obliterate the small bodies of innocent children in order to appreciate the absurdity of allowing public sales of assault rifles merely to enhance the profitability of gun makers.

Some feel the moment is right for a shocking wake-up call akin to the open-casket funeral of Emmett Till. Two white men brutally tortured, beat and lynched the 14-year-old Black boy in Mississippi in 1955. Till’s mother wanted the world to see “what they did to my baby.” The decision inspired a generation to join the civil rights movement.

Thus far we’ve clung to the belief that showing graphic effects of gun violence would violate a boundary of decency. We’ve allowed special interest money to make the debate about Second Amendment rights instead of saving lives.

However, for the moment, cameras are following outraged suburban Chicago moms as they march in Washington to demand Congress ban assault weapons. Some said a study showed the risk of dying in a mass shooting declined by 70% between 1994 and 2004, when Congress banned assault weapons. Lawmakers let the ban expire.

The National Rifle Association told WGN-TV that the 10-year ban on assault weapons was ineffective and that a similar ban would not work today.

“Simply put, it had no impact in curbing violent crime,” the NRA said.

We can continue to let both sides have their say, or we can point out that one side’s argument is founded on lies. No, dozens of good guys with guns did not stop the one bad guy with a gun from butchering young children in Uvalde. Arming teachers won’t make a difference. Selling more guns won’t solve the problem.

Grieving parents and communities demand more be done than passing legislation like the Bipartisan Safer Communities Act, which President Joe Biden signed into law Monday. The new law includes federal funding to help states implement so-called red-flag laws, like one Illinois enacted in 2019, that allow courts to confiscate weapons temporarily from those deemed dangerous to themselves or others, the Chicago Tribune reported.

News updates from the south suburbs delivered every Monday and Wednesday

Red-flag laws can only do so much to keep guns out of the hands of dangerous individuals when agencies lack resources to sufficiently scour backgrounds, a Tribune investigation found. A better solution would be to reduce the availability of guns.

At least America is talking about doing something to reduce gun violence. After previous mass shootings, the well-funded NRA would deploy its army of advocates who would argue that out of respect for victims, it was too soon after a tragedy to politicize their deaths.

Now, however, the NRA is hobbled by legal action and alleged financial mismanagement. The group seems less able to push back against mounting calls for action that are moving the needle of public sentiment.

“For the first time in 30 years we passed a new gun law at the federal level,” David Hogg, a survivor of the Parkland shooting and founder of the group March For Our Lives, posted recently on social media. “Told you this time was different :).”

Ted Slowik is a columnist for the Daily Southtown.