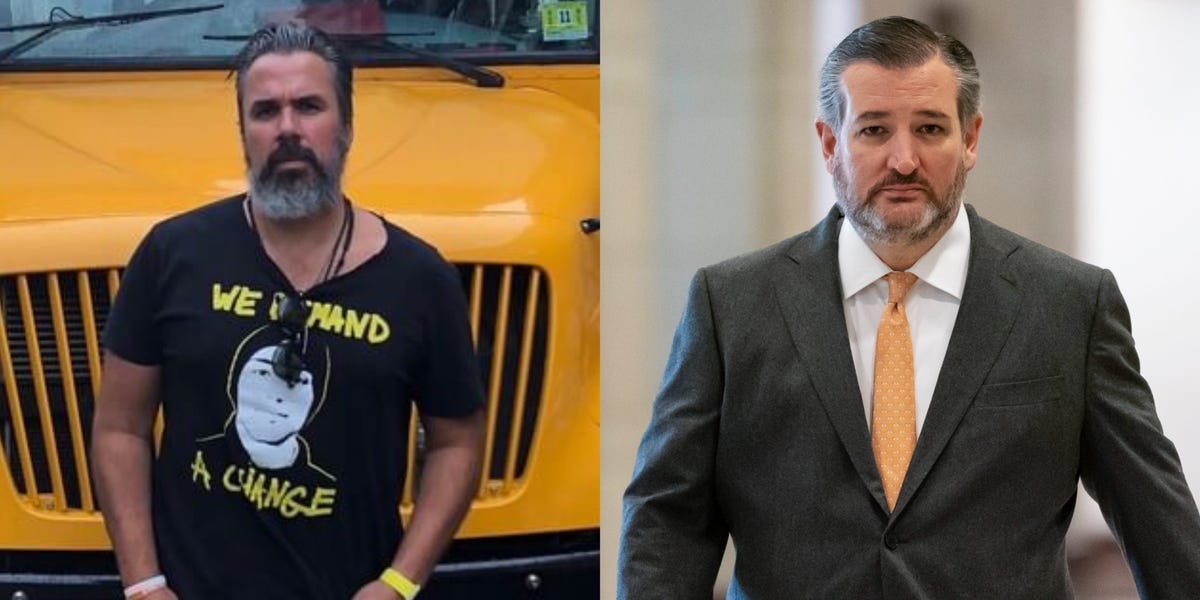 The Parkland shooting victim’s dad who on Monday interrupted President Joe Biden’s speech about gun control is sending a fleet of 52 school buses to Sen. Ted Cruz’s house in Texas to represent the number of kids killed by gun violence this year.

The 4,368 empty seats in the mile-long procession are meant to represent each of the children who have died at the hands of guns this year alone, according to Change the Ref, the organization leading the charge.

The project, dubbed the “NRA Children’s Museum,” was created by Manuel Oliver whose son, Joaquin Oliver, was killed in the 2018 Parkland shooting.

“It’s partially with the intention that some people will think this is truly an NRA museum,” Oliver told BuzzFeed News of the project.

“We’re going after the money,” Oliver said. “These leaders are not loyal to the Second Amendment. They’re loyal to the gun industry and manufacturers, who protect them. And there’s lots of messages that supporting gun control is not patriotic. It’s corrupt, and I wanted to find a graphic way of showing them what the impact really is.”

In response to the demonstration, a spokesperson for Cruz said the Senator is “committed to enacting policies that would stop school shootings.”

The statement, shared with Insider, continued: “To that end, he introduced legislation to double the number of school resource officers, hire 15,000 school-based mental health professionals to ensure there is early intervention to identify and help at-risk kids, to provide significant resources for enhanced school safety, and to improve the gun background system and prosecute persons who try to illegally buy guns.”

The procession of yellow school buses hit the road Thursday morning. One Twitter user shared a photo of the vehicles, which have draped black and purple flags along their sides.

The first bus in the procession will carry items from school shooting victims from this year and years past, according to Change the Ref’s Instagram.

The items on the first bus include a pair of checkered vans from 15-year-old Gracie Muehlberger, who was killed at her Santa Clarita high school in 2019.

It is also carrying a kindergarten graduation card with a smiling teddy bear on it which was given to Chase Kowalski, a Sandy Hook Victim.

In addition, Oliver will hand deliver a 2013 note penned by his son for a school project in which he discusses issues of gun control with gun owners in the US.

Oliver told BuzzFeed his wife found the letter just a month after Joaquin was killed.

“My son knew, at 12 years old, what to do better than Ted Cruz. I want [Cruz] to read that with his own eyes,” Oliver’s wife, Patricia, told BuzzFeed News.

In the note, Joaquin questioned why U.S. gun owners are against background checks.

This is not Oliver’s first project — just last year he put on a fake graduation at which a former NRA president spoke to an audience of 3,000 empty seats, each one representing a teen lost to gun violence.

“I just told the president, who I know personally, who I voted for, who I campaigned for: ‘President Biden, you can do more,'” Oliver told the gun control advocacy group Guns Down America later that day.

ILA | Colorado: Broomfield City Moves to Adopt Gun Control Package to Diminish Second Amendment Rights!
BOOR REVIEW: ‘American Rifle: The Case for the AR-15″
Opinion | We can’t cure mental illness, but we can get guns off the streets
Another mass shooting puts gun safety front and center at the Colorado Capitol
Mass Shootings Plague the U.S. – The Spectator