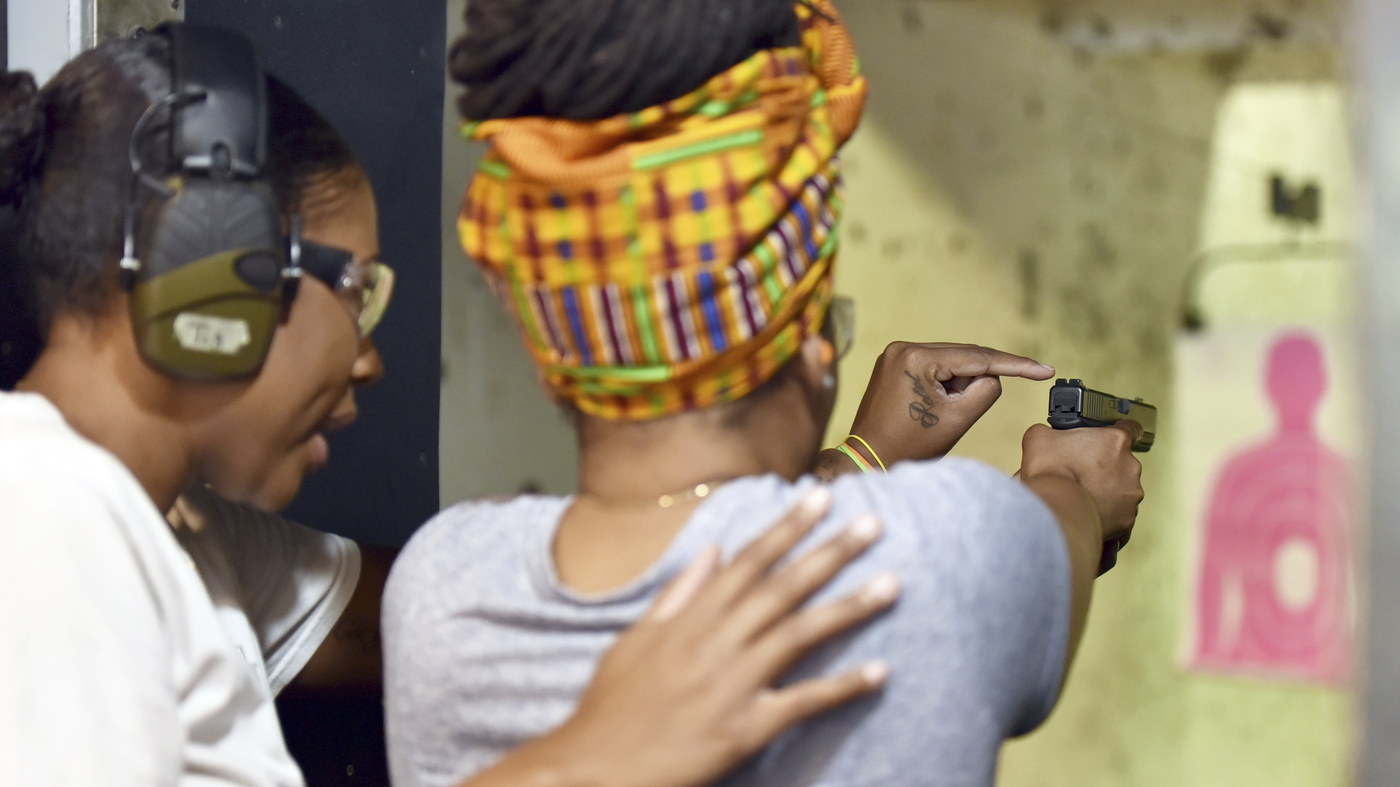 Marchelle Tigner, a firearms instructor, teaches a student how to shoot a gun during a 2017 class in Lawrenceville, Ga. Tigner’s goal is to train 1 million women how to shoot a gun in her lifetime. She is among the nation’s Black women gun owners who say they are picking up firearms for self-protection.

Marchelle Tigner, a firearms instructor, teaches a student how to shoot a gun during a 2017 class in Lawrenceville, Ga. Tigner’s goal is to train 1 million women how to shoot a gun in her lifetime. She is among the nation’s Black women gun owners who say they are picking up firearms for self-protection.

WASHINGTON, D.C. — The Supreme Court’s recent decision to guarantee the constitutional right of people to carry firearms in public spaces for the purpose of self-defense has become a complicated issue for Black Americans.

Black Americans overwhelmingly vote Democratic but have emerged in recent years as the fastest-growing demographic of gun owners.

“There is an increasing group of Black people who are looking to gun ownership for a variety of reasons, including a feeling of being almost abandoned by the state for protection,” says Kelly Sampson, senior counsel and director of racial justice at the gun safety organization Brady. “In a country that’s supposedly governed by the rule of law, that is a real issue.”

The Supreme Court’s 6-3 decision on June 23 was its first on firearms in more than a decade.

The case successfully challenged New York’s “proper cause” law, which said that individuals seeking concealed carry permits must demonstrate an active need for protection, rather than a general desire for self-defense.

Sampson points to the 2016 case of Philando Castile, a Black man who was pulled over for a broken tail light, told the officer that he was licensed to carry a firearm and was reaching for his wallet when he was shot and killed by police.

“We live in a society that codes Black people in general as criminal but especially when we carry arms,” she says. “So when you strip away all of the rhetoric around the Second Amendment, you still can’t get away from the fundamental issue that we live in a country where Black people are disproportionately dying from gun homicides, and Black people also are disproportionately impacted by police violence. And one of the rationales that police will use when they perpetuate this violence is that a person had a gun.”

Gun ownership is seen as a major equalizer

Carl Williams operates the YouTube channel A Regular Gun Guy. He’s Black, like others interviewed for this story.

Gun ownership is “one of the equalizers to being able to protect yourself and your family,” he says, praising the Supreme Court decision as a step in the right direction for legal gun owners. “I mean, it gives you a chance — gives you a fighting chance — with a lot of stuff that’s going on nowadays.”

While gun issues are top of mind when he enters the voting booth, Williams says he feels conflicted between Democrats and Republicans.

“You have one side that’s obviously pro-Second Amendment,” he said. “The other side doesn’t seem to be, but they may have better policy in terms of helping our people.

“So, yes, definitely it keeps me at odds, which is why I’m not a big political guy.”

Given the current social climate in the U.S., Williams says, Black people should better familiarize themselves with guns and consider owning firearms as a means to protect themselves and their interests.

Black Americans have the highest growth in gun ownership

Although whites buy about 55 percent of firearms, gun purchases by Black Americans rose 58.2 percent in the first half of 2020, according to the National Shooting Sports Foundation, a trade group for the firearms industry.

That year, the coronavirus pandemic came to U.S. shores in full force, and protests over the treatment of Black people, specifically at the hands of police, swept the nation.

The same year also saw U.S. gun deaths rise 35 percent – the highest level since 1994, according to the Centers for Disease Control and Prevention (CDC). Black men and boys aged 10 to 24 died by gun homicide more than 21 times as often as white males in the same age groups.

And while mass shootings are more likely to grip the national focus and spur calls for change, everyday gun violence and suicides are by far the leading contributors to the CDC statistics.

“If anything, it encouraged me more to want to own a firearm legally and be able to protect myself just in case something happened,” Williams, the YouTuber, said of the 2020 civil unrest.

There are mixed reactions to the Supreme Court ruling

Tracy Brown, an artist and activist, is one of those women. She says that even though she’s a proponent of safe gun ownership, she has mixed feelings about the Supreme Court ruling.

“It means that more women will have the opportunity to get firearms in the interest of self-defense and protecting themselves. But you know, it’s such a complicated issue, especially for Black people,” she says. “There are a lot of very unhealthy perspectives held by those who typify the gun-owning population in this country.”

Brown points to the popular Rubber Dummie shooting target, which many people say looks like a Black man. She says it’s emblematic of dangerous attitudes toward Black people.

Earlier this year, Brown successfully petitioned the federal General Services Administration to remove the offensive target from its purchasing schedule.

“I’m concerned about having guns because [some gun owners] have unhealthy attitudes and ideas towards people in general, but especially people of color and women,” Brown says. “And I feel like it’s going to give them more fuel for committing [and] perpetrating violence against us.”

Guns have been a way for Black communities to protect themselves from those bad actors, she says.

“Understanding that keeping guns away from Black people has been part of the social agenda in this country for a long time. And it was an effort, just like keeping us away from education was an effort, to ensure that we would not be able to defend ourselves.”

Jabir Asa also pointed to the historic disarmament of Black people as to why he supported the Supreme Court decision.

“We have already seen historically that when you go on any kind of gun-grabbing campaign, the only people with guns are the kind of people who would never worry about the legality of having them in the first place,” he said. “And then you find yourself in a position where you’re vulnerable to fascists.”

Asa is the minister of social media for the Cleveland chapter of the Huey P. Newton Gun Club – so named after the co-founder of the Black Panther Party. Asa described the group’s ideology as Marxist-Leninist, with an eventual goal of existing in a stateless, classless society.

He said that much of the United States’ has been marked by hostility towards Black gun ownership.

One of the more notable instances in recent history was California’s 1967 Mulford Act, which prohibited carrying loaded weapons in public spaces without a permit.

The measure’s explicit purpose was to disarm members of the Black Panther Party, who had been conducting neighborhood armed patrols they said were meant to protect their communities from police misconduct.

The legislation was backed by Democrats and Republicans and supported by the National Rifle Association.

“So while we’re not explicitly looking to carry out violence against anyone, we are very much going to respond to any violence escalated against us with the appropriate response in self-defense, as is our constitutional right.”