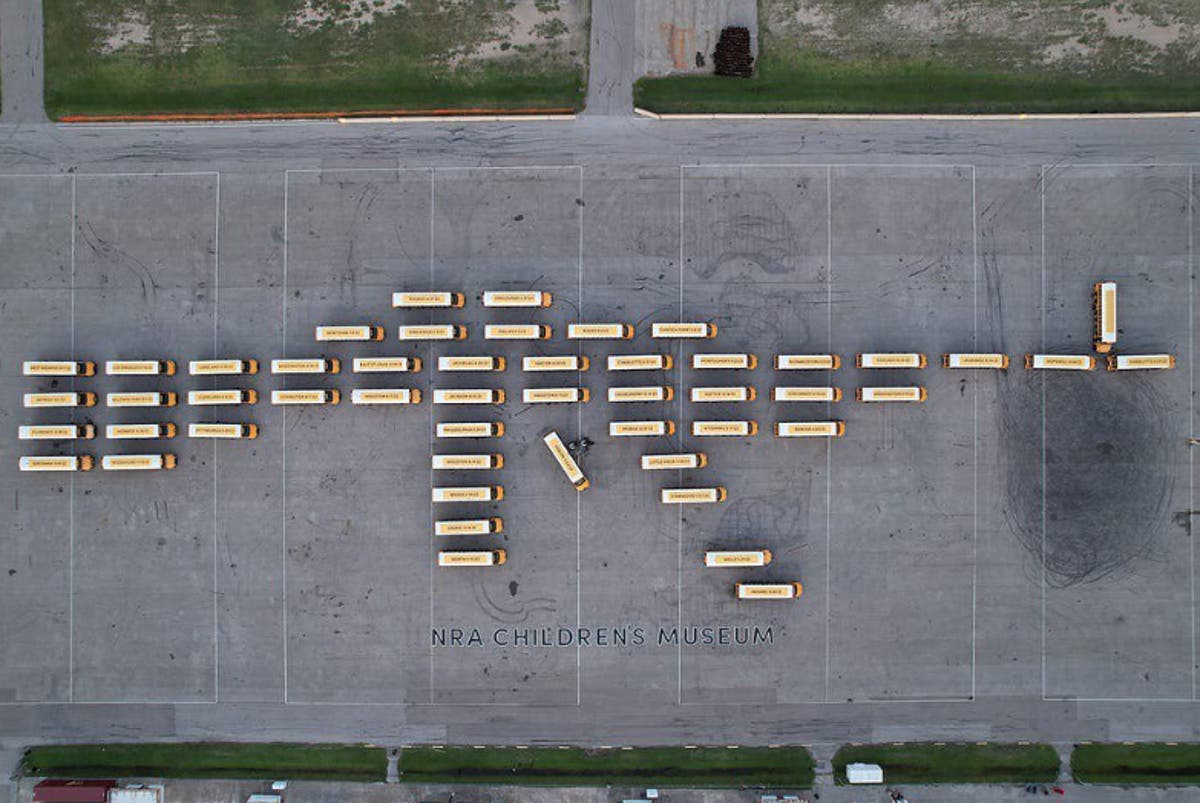 A new organisation called the NRA Children’s Museum is seeking to raise awareness of the toll that mass shootings are taking on American children — and Texas Senator Ted Cruz is its first target.

On Thursday, a fleet of more than 50 school buses arrayed in the shape of a rifle proceeded to Mr Cruz’s home in Houston

““To commemorate this horrific historic moment, we are showing American voters the toll these politicians have taken on our children’s lives with this all-too-real archive,” NRA Children’s Museum co-founder Manuel Oliver stated in a statement.

“And this is only the beginning. We will not stop with Sen. Ted Cruz. To every politician who has stood by, taken NRA money, and refused to listen to the people they represent: the museum is on the way to honor you next.”

Mr Oliver co-founded the organisation with his wife Patricia after they lost their son Joaquin in the 2018 mass shooting at Marjorie Stoneman Douglas High School in Parkland, Florida.

The bus fleet that made its way to Mr Cruz’s house contained 4,368 empty seats to represent the number of children killed by gun violence since 2020. Gun violence is now the leading cause of injury-related death for US children, having overtaken motor vehicle accidents in recent years.

Mr Cruz, who represents a state that just suffered a gruesome mass shooting at an elementary school in the spring, is a natural target for the movement to enact stricter firearm laws.

Unlike Texas’ senior Sen. John Cornyn, Mr Cruz opposed a package of gun reform legislation introduced in the Senate in the days following the shooting at Robb Elementary School in Uvalde even though it did not include any outright bans on weapons.

Throughout his career, Mr Cruz has been a staunch opponent of gun control measures who has — perhaps most significantly for the activists who visited his home on Thursday — taken more than half a million dollars in his Senate career from pro-gun organisations and groups.

In fact, Mr Cruz has taken more money from the gun lobby than any other person currently serving in Congress.

“We’re going after the money,” Mr Oliver said in an interview with BuzzFeed News. “These leaders are not loyal to the Second Amendment. They’re loyal to the gun industry and manufacturers, who protect them. And there’s lots of messages that supporting gun control is not patriotic. It’s corrupt, and I wanted to find a graphic way of showing them what the impact really is.”

Mr Oliver was also in the headlines earlier this week when he called out President Joe Biden at a White House press conference for not doing more to combat gun violence and was escorted away by Secret Service agents.

The bus that led the procession to Mr Cruz’s home was filled with mementos and personal effects from children killed in school shootings, including a Miami Heat jersey of Joaquin’s. There have already been more than 300 mass shootings in the US this year alone.

Outraged Uvalde Residents Rise Up Against Local Fundraiser for NRA
Where is the Republican courage on banning assault weapons?
Guns And The Blame Game; Penny For Republican Thoughts! : ThyBlackMan.com
Former Sioux Falls mayor hopes to raise awareness of gun violence prevention
Hondo vote a win for families of Uvalde