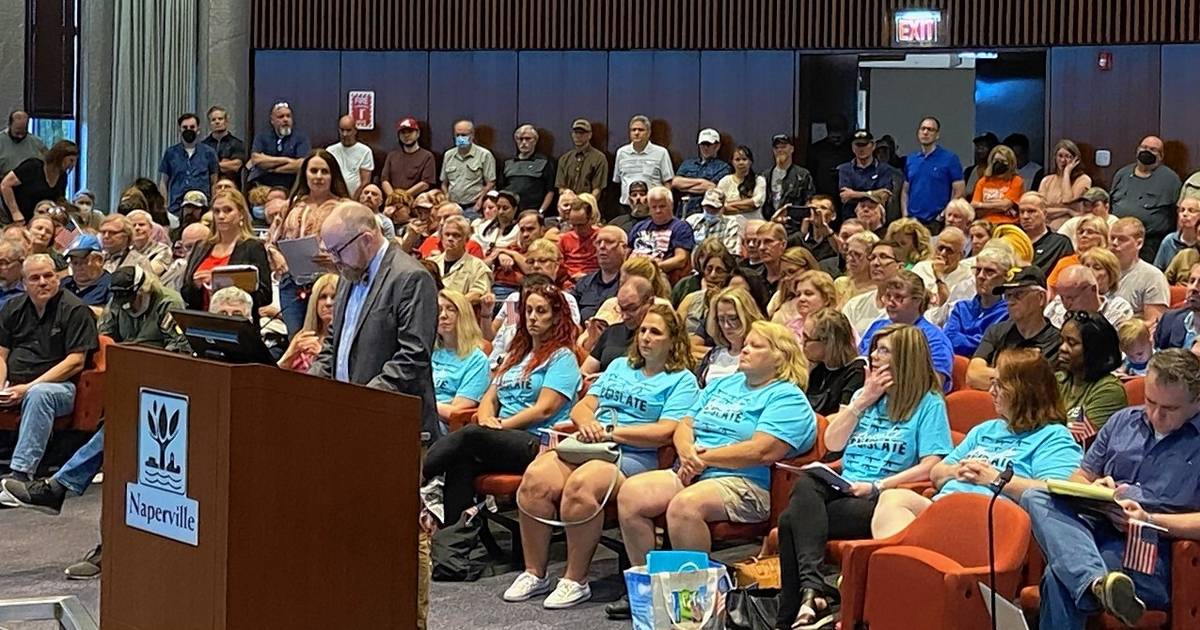 Emotions ran high on both sides of the gun control debate Tuesday night in Naperville as community members and city officials weighed in on a proposed ban on the commercial sale of some high-powered weapons.

At Tuesday’s city council meeting, community and council members debated an ordinance prohibiting the sale of what Naperville officials describe as “assault weapons and large-capacity magazines, defined as ammunition magazines capable of holding more than ten rounds of ammunition.”

In a draft of the ordinance, city staff members listed five pages of specific firearms that couldn’t be sold in the city, including the AR-15-style semi-automatic rifle used in the Highland Park parade shooting that killed seven people and injured dozens.

An “assault weapon” is defined in the ordinance to include a semi-automatic rifle with a magazine that is not fixed and has certain features like a pistol grip or a grenade launcher.

The ordinance could face a final vote on Aug. 16 at the next city council meeting.

“I don’t care if someone sues and gets this law overturned, though I hope that doesn’t happen,” said the Rev. Mark Winters. “You all get to tell this community and the rest of the country, ‘We are not going to willingly participate in helping mass shooters arm themselves.'”

The ordinance would affect two gun stores in the city in addition to other local licensed sellers such as pawnshops. Private sales of the weapons would not be prohibited, and residents would not be blocked from owning them.

“If you pass that ordinance, you will literally destroy — in the blink of an eye — everything that my family has spent a large part of their lives building together,” said Robert Bevis, owner of Law Weapons and Supply in Naperville. “This ordinance, if passed, would do absolutely zero to prevent even one crime or fatality. It will not stop one criminal intent on coming into the city of Naperville to commit a crime.”

The council chambers were filled Tuesday night with an overflow crowd of people supporting and opposing the proposed ban. More than 50 people signed up to speak on the issue and dozens more submitted written opinions.

After a parade of public speakers that lasted hours, including breaks called by Mayor Steve Chirico because of disruptions in the crowd, the city council members gave their opinions on the first reading of the ordinance.

In a memo to city council members, City Attorney Michael DiSanto said Naperville’s home-rule powers allow officials to regulate the sale of “assault weapons and large-capacity magazines within their jurisdiction.”

“Illinois generally prohibits local municipalities from passing their own brand of firearm regulations,” Weber said. “That means any ban passed by the Naperville City Council would be in violation of state law.”

After Tuesday’s debate, the city council voted to make changes to the ordinance, directing staff and the city attorney to add an exemption for police, law enforcement and military personnel. The changes also remove handgun sales and the sale of large capacity magazines for handguns from the proposed ban.