An Orthodox resident in Monsey takes a firearm training class with the Tactical Defense Initiative. (Courtesy)

(New York Jewish Week) — In the heavily Orthodox hamlet of Monsey in upstate New York, a Jewish gun owner is threatening a lawsuit to block Gov. Kathy Hochul’s efforts to limit where guns can be carried.

Tzvi Waldman, who is Orthodox and the founder of the New York State Jewish Gun Club (NYS-JGC) in Rockland County, told the New York Jewish Week that he plans to fight Hochul’s gun legislation, calling it unconstitutional.

“What the governor did in New York State flies in the face against any logic,” Waldman said. “For a shul not to have the ability for people to carry arms is ridiculous.”

The club, which Waldman claims has hundreds of members, started about four years ago as a meet-up event for gun enthusiasts. It now includes training, education, help with permits and more.

“My email is blowing up with new members,” Waldman said. “It’s out there, and it’s growing.” 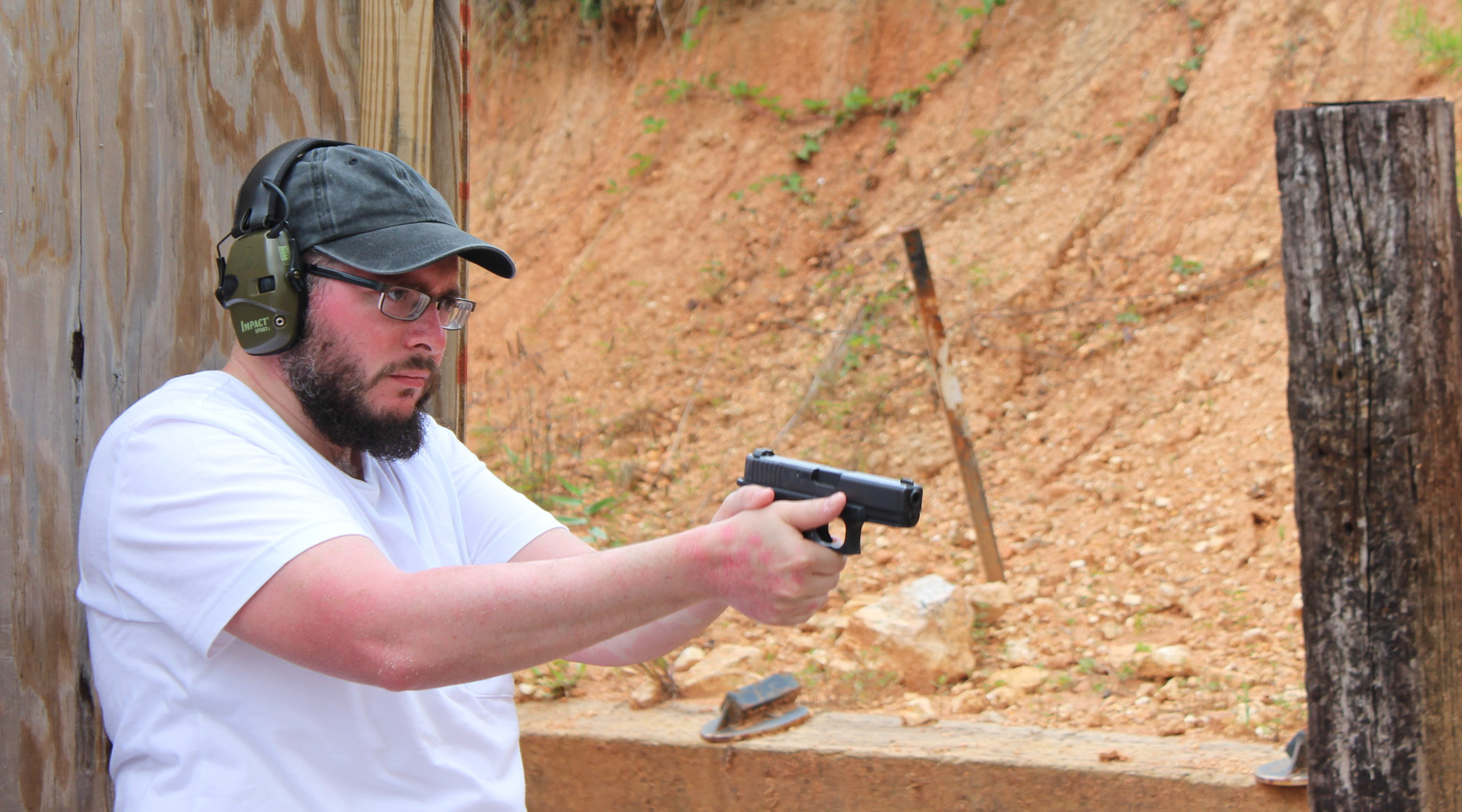 Tzvi Waldman is the creator of the New York State Jewish Gun Club in Monsey. (Courtesy)

Among the majority of Jews who are not Orthodox, support for gun control is widespread. The Reform and Conservative movements, the network of Jewish federations and the non-denominational Jewish Council for Public Affairs have all passed resolutions in favor of tight gun safety laws.

Yet Orthodox communities have polled and voted along conservative lines in recent years, sympathetic to a Republican platform that, especially in light of rising reports of antisemitic attacks, includes wide access to firearms.

Meanwhile, deadly attacks on synagogues — including the 2018 massacre at the Tree of Life synagogue in Pittsburgh and the deadly 2019 shooting at a Chabad synagogue in Poway, California — reignited a debate about keeping Jewish worshippers safe, with some synagogues advocating the carrying of concealed weapons. In January, a gunman held four people hostage in a synagogue in Colleyville, Texas, before being shot himself by police.

On July 1, after the U.S. Supreme Court struck down a New York law tightly limiting who may carry a concealed weapon, Hochul signed legislation that bans people from carrying guns in places of business, including houses of worship, unless they put up a sign explicitly stating that guns are welcome there.

We must treat gun violence as the public health crisis that it is, and our work starts at the community level.

The work we’re doing across the state — from getting weapons off the streets to supporting violence interrupters — will help return these streets to our communities. pic.twitter.com/IW0yQwv4Gx

In an effort to block this legislation, Waldman said he is working with “various Second Amendment rights organizations.” He would not mention specifics, saying that it is still “in the works.”

A section on the club’s website says that it is “looking for plaintiffs who have a clean criminal and mental background to join a lawsuit.” The site also has an option to download a sign or have one mailed that says “Concealed Carry Is Welcome Here.”

“Thank you for keeping our children safe,” the sign says. “May Hashem [God] continue to watch over us.”

A spokesperson for the governor said in a statement to the New York Jewish Week that Hochul signed “landmark legislation developed to comply with the Supreme Court’s recent decision.”

“We have no further comment given pending litigation,” the spokesperson said.

Waldman contends that by making places of business put up signs about guns, it is forcing them to declare their political identity. “People want to protect themselves,” he said. “This is not helping our political divisiveness. It’s just going to accelerate that in this country. It’s only going to cause more problems for businesses.”

Waldman added that he has “a couple thousand posters on order” and is planning to get them out to more stores.

Rabbi Aron Lankry, who heads Yeshiva Yoreh Deah in Monsey and has attended events held by Waldman’s gun club, told the New York Jewish Week he is worried about Hochul’s legislation because members of his synagogue, Ohr Chaim, volunteer as armed security for his congregation.

“A hired gun won’t be able to identify who belongs and who doesn’t,” Lankry said, referring to a security guard. “A fine gentleman who is not familiar with the rituals and customs of the synagogue, a shooter is going to walk right through him.”

Lankry added that if Hochul’s law makes it harder for private citizens to carry guns for protection in a synagogue, then her administration “will have to carry the onus and the burden of the next attack because it’s only a matter of time.”

Lankry’s yeshiva was hit with an arson attack in 2019. The perpetrator also defaced parts of the building with swastikas.

The yeshiva and synagogue complex, fitted with lakes and barns, sits on 90 acres of land, and includes a range for “real firearm training” with National Rifle Association-certified instructors including members of the Israeli military.

Shlomo Reichberg is one of those instructors. He served in the Israel Defense Forces, and now has his own range in the Catskills called the Tactical Defense Initiative.

Reichberg told the New York Jewish Week that he wanted to bring the concept of “defending the homeland” back to wherever Jews are living around the world, including New York.

“People are very scared,” Reichberg said, adding that Monsey residents began noticeably arming themselves after a man went on a stabbing spree at a rabbi’s home on Hanukkah in December of 2019. One victim, aged 72, died of his wounds. One month after the knife attack, requests for gun permits and sales of firearms rose in heavily Jewish areas of Rockland County and bordering northern New Jersey, NorthJersey.com reported.

“There seems like there is a lot of gun ownership” among Orthodox Jews in Monsey, Reichberg said. “But I wish there were more people.”

He also said that in Rockland County, where Monsey is located, more Jewish people own firearms because the gun laws are much less restrictive than in New York City.

Reichberg noted that he advocates for training in the Jewish community because owning a gun “is not enough,” he said. “It’s like owning a helicopter, but you don’t know how to fly it. It takes a lot of determination to actually pull the trigger.” 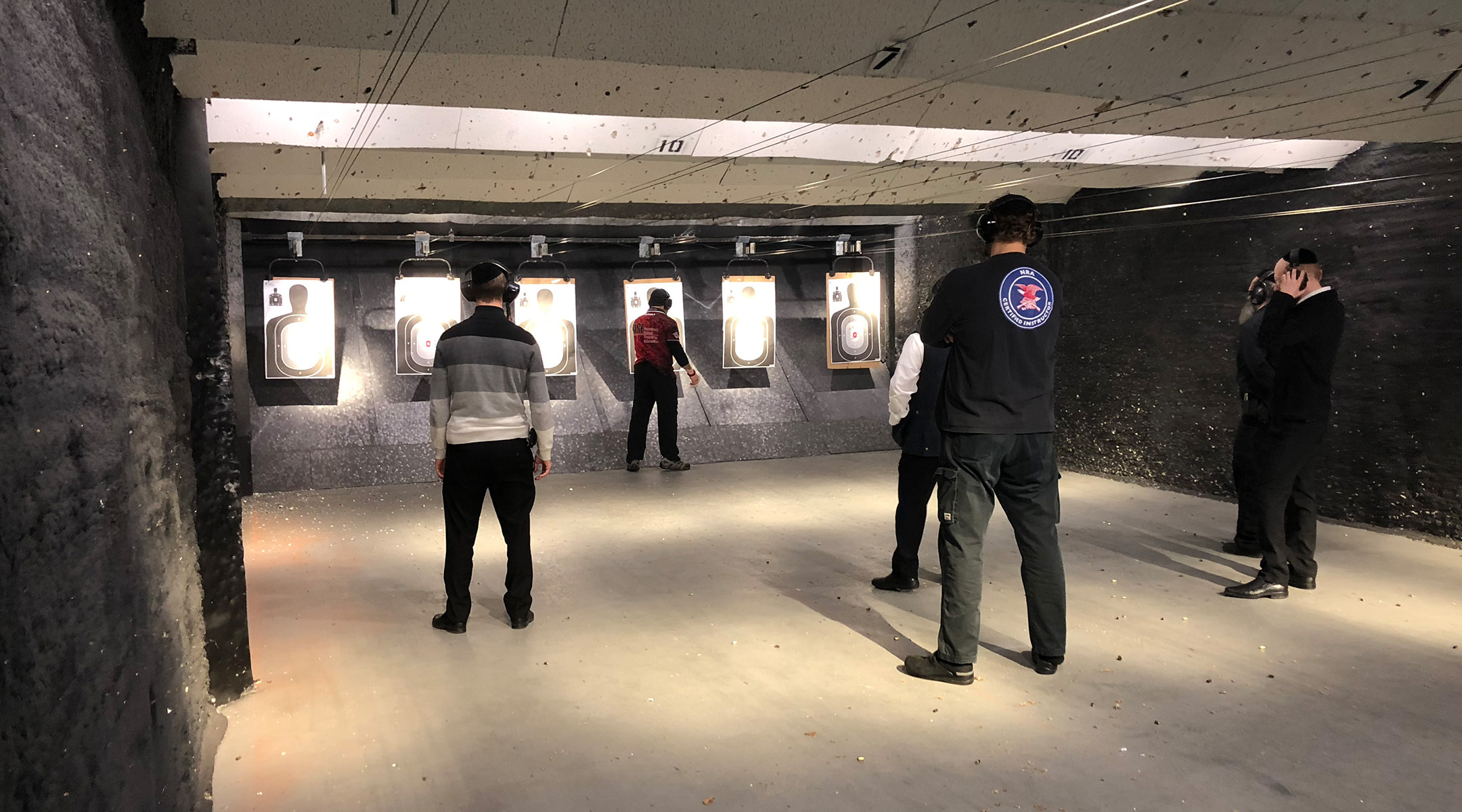 Goldman said while he likes “the sport” of shooting guns and finds it relaxing, his mindset changed after the Hanukkah stabbing attack. “It was a block away from where I live,” he said. “The rabbi who died, my grandmother used to buy fish from him. We know them. He was a sweet man. That changed my perspective from the fun part to the real-life part.”

Rabbi Rachel Timoner, who heads Congregation Beth Elohim in Park Slope and is a co-founder of New York Jewish Agenda, a progressive Jewish group, told the New York Jewish Week that while the Torah is “not a pacifist document,” it teaches that the first obligation in Judaism is saving life.

“We know that we have a problem in the country of gun proliferation leading to mass murders on a regular basis,” Timoner said. “As Jews, we ought to be attributing our voices to the reduction of gun violence.”

Timoner said that Beth Elohim has had a security system since the Tree of Life shooting. “Unfortunately, we have invested in quite a lot of security,” she said. “We don’t feel like we have a choice. We have police and off-duty police who are armed. We have an extensive alarm and camera system. I even have a panic button.”

Nevertheless, she sees a distinction between a well-conceived security protocol and arming congregants. “We as a congregation believe in gun safety legislation and gun control,” Timoner said. “We would like to see a significant reduction in gun ownership in America and we support this kind of legislation by the governor.”

Timoner also shared concerns about how gun ownership has gained support within the Orthodox community, calling it “a departure from the core values of Judaism.”

“This also seems to be about disregarding the systemic reality we are facing, which is that the proliferation of guns are making us less safe, and are endangering innocent lives on a daily basis,” Timoner said. “To take a stand in favor of guns, it feels to me to be extremist and not Jewish.”

Rabbi Lankry, meanwhile, advocates for some Jews in the pews to arm themselves, saying that it is sanctioned by Jewish law in the Talmud.

“If someone is coming to oppress you, you should initiate an oppressive force,” Lanskry said, paraphrasing the relevant passages on justified self-defense. “In Israel, people are carrying guns on the Sabbath. This is an unfortunate necessity for the Jewish people.”

This article originally appeared on JTA.org.