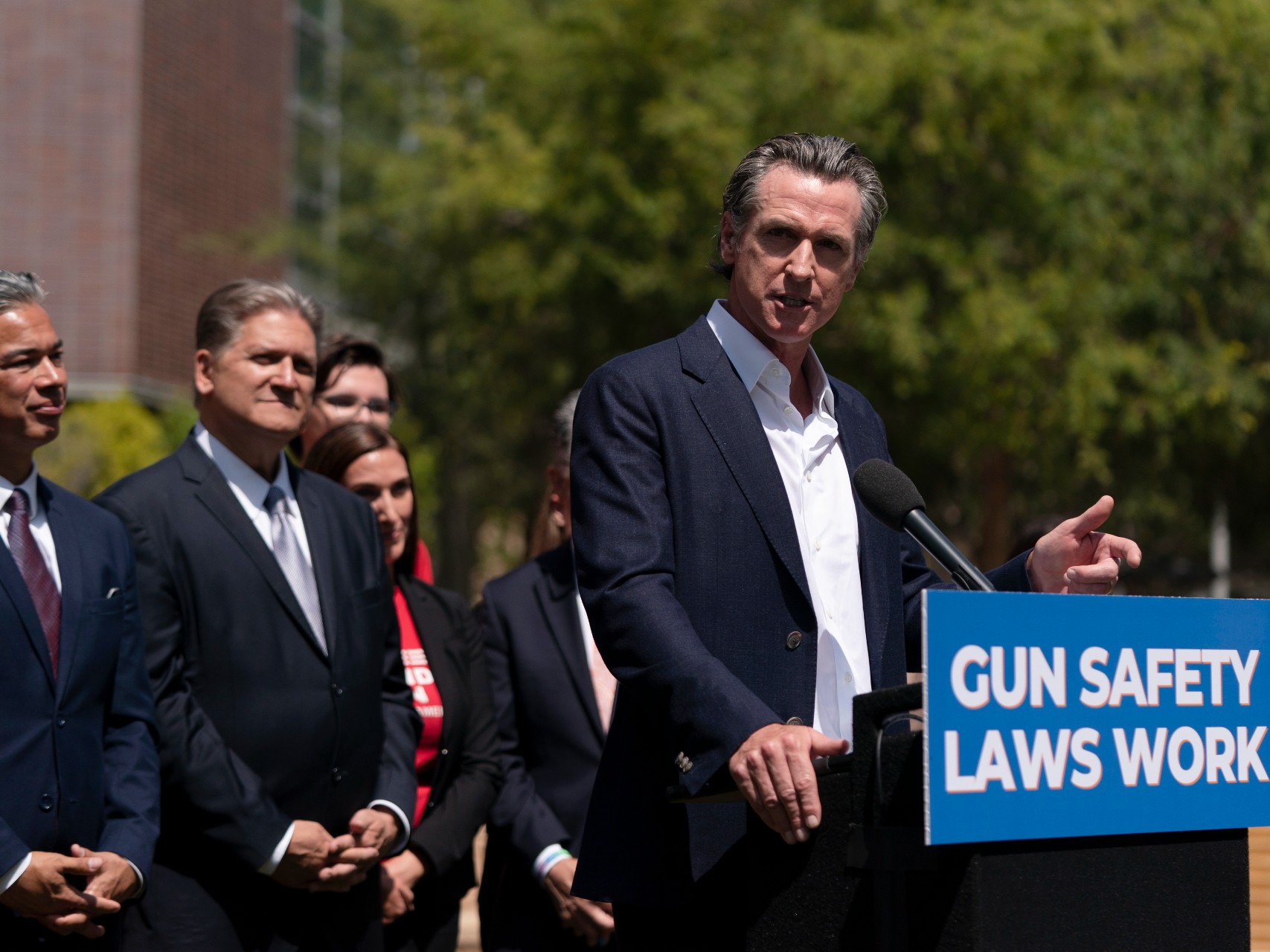 After opening the door for civil lawsuits against gun makers and sellers earlier this month, Gov. Gavin Newsom expanded the ability for private citizens to sue the firearms industry for deaths and injury caused by gun violence.

The governor signed a bill Friday to allow private citizens to sue gun makers, sellers, dealers and others for monetary damages for making or selling weapons banned in the state.

“This is not where we end,” he said before signing the bill. “It’s time to put them on the defense. You cannot sell, you cannot manufacture, you cannot transfer these illegal weapons of war and mass destruction in the State of California, and if you do, there are 40 million people who can collect $10,000 and attorney fees for engaging in that illegal activity.”

Newsom lauded the legislation as “perhaps the most impactful thing” the state has done to prevent gun violence, though legal experts say it will likely face challenges in court.

The governor signed the legislation at Santa Monica College, which was the site of a shooting in 2013 which left six people dead, including the shooter. He was backed by gun control advocates and Mia Tretta, who survived a 2019 shooting at Saugus High School in Santa Clarita. As a freshman, she was shot in the abdomen and her best friend was killed with what police would late determine was a ghost gun.

“I would quickly learn that these unmarked, untraceable, build-it-yourself firearms were the fastest growing public safety threat in our country,” Tretta said. “Anyone with a credit card, the skills to build an IKEA dresser and some spare time can make the same gun that took the lives of two classmates and changed mine forever.”

Newsom signed a law last month to ban ghost guns and require anyone in possession of an unserialized weapon to contact the California Department of Justice by January 2024 to receive an ID mark.

Earlier this month he signed another law requiring firearm businesses to abide by a “standard of conduct” and take “reasonable” measures to prevent their weapons from falling into the hands of people who would use them illegally. The law, which takes effect July 2023, will allow citizens and prosecutors to sue gun dealers and manufacturers for failing to prevent gun violence.

The bill Newsom signed Friday is modeled after Texas’ new abortion law, which bans the procedure after about six weeks. It includes a provision allowing citizens to sue anyone who “aids or abets in the performance or inducement of an abortion,” which includes paying for it.

The U.S. Supreme Court declined to take up that piece of the Texas law, allowing it to go into effect in December. But legal scholars say the provision – which relies on private citizens rather than state prosecutors to enforce Texas’ abortion law – is effectively moot now that the Supreme Court has overturned Roe v. Wade and returned the issue of abortion to the states.

“These statutes are becoming more popular both in the abortion and the gun context,” said UC Davis Law professor Katherine Florey. “The idea is there are some added advantages in having private enforcers because they may be more motivated than prosecutors, and that if you’re trying to enforce a particular restriction, it may be helpful to have private parties involved.”

Will the private right of action laws stand?

Gun rights groups including the California Rifle and Pistol Association have threatened to challenge the new laws. The group did not respond to a request for comment.

Gun dealers and manufacturers have been shielded from liability for their products since 2005, when Congress approved the Protection of Lawful Commerce in Arms Act. The law followed a series of lawsuits against the companies for their products’ role in gun violence.

Legal experts say the laws will likely face legal scrutiny to determine whether they are preempted by that federal law. They could also be challenged on grounds that private citizens need legal standing – or proof they have been personally harmed in some way – to bring a lawsuit against gun companies.

Florey said gun rights groups may also sue to stop the law from taking effect on grounds that it violates the Second Amendment or the Commerce Clause of the Constitution. (The Supreme Court will consider a case involving the Commerce Clause later this year. The case was brought by pork producers against a California law requiring pigs to have a certain amount of space in their pens.)

William Vizzard, a professor emeritus at Sacramento State University and a former agent with the Bureau of Alcohol, Tobacco, Firearms and Explosives, said he sees the new law as more of a blatant political maneuver than a gun policy. He points out language in SB1327 states the law becomes inoperable if the Texas abortion law is struck down by the courts.

“Rather than a gun regulation, I would view this more as a response of the California legislature to the Texas legislature, in what they view as an outrageous abortion regulation,” Vizzard said.

Newsom said he fully expects the law to be challenged but said “the Supreme Court will be challenged” to overturn the law based on its handling of the Texas abortion law. “There is no way they can deny us the right to move in this direction, so we are doing just that,” he said.

The politics of guns and abortion

Newsom also made another move Friday in a feud with GOP-led states by running full-page ads in Texas newspapers contrasting Gov. Greg Abbott’s comments on abortion and the right to life with the state’s lax gun laws.

“If Texas can ban abortion and endanger lives, California can ban deadly weapons of war and save lives,” Newsom wrote in the ad. “If Governor Abbott truly wants to protect the right to life, I urge him to follow California’s lead.”

A spokesperson for Abbott said Newsom should “focus on all the jobs and businesses that are leaving California and coming to Texas.”

Asked for comment on this, Abbott spox @RenaeEze says, “Governor Newsom should focus on all the jobs and businesses that are leaving California and coming to Texas” https://t.co/2AvoHf0GbG

Newsom has signed nearly a dozen other bills in recent weeks restricting when, where and what kind of firearms can be sold in the state. They include:


CapRadio provides a trusted source of news because of you.  As a nonprofit organization, donations from people like you sustain the journalism that allows us to discover stories that are important to our audience. If you believe in what we do and support our mission, please donate today.