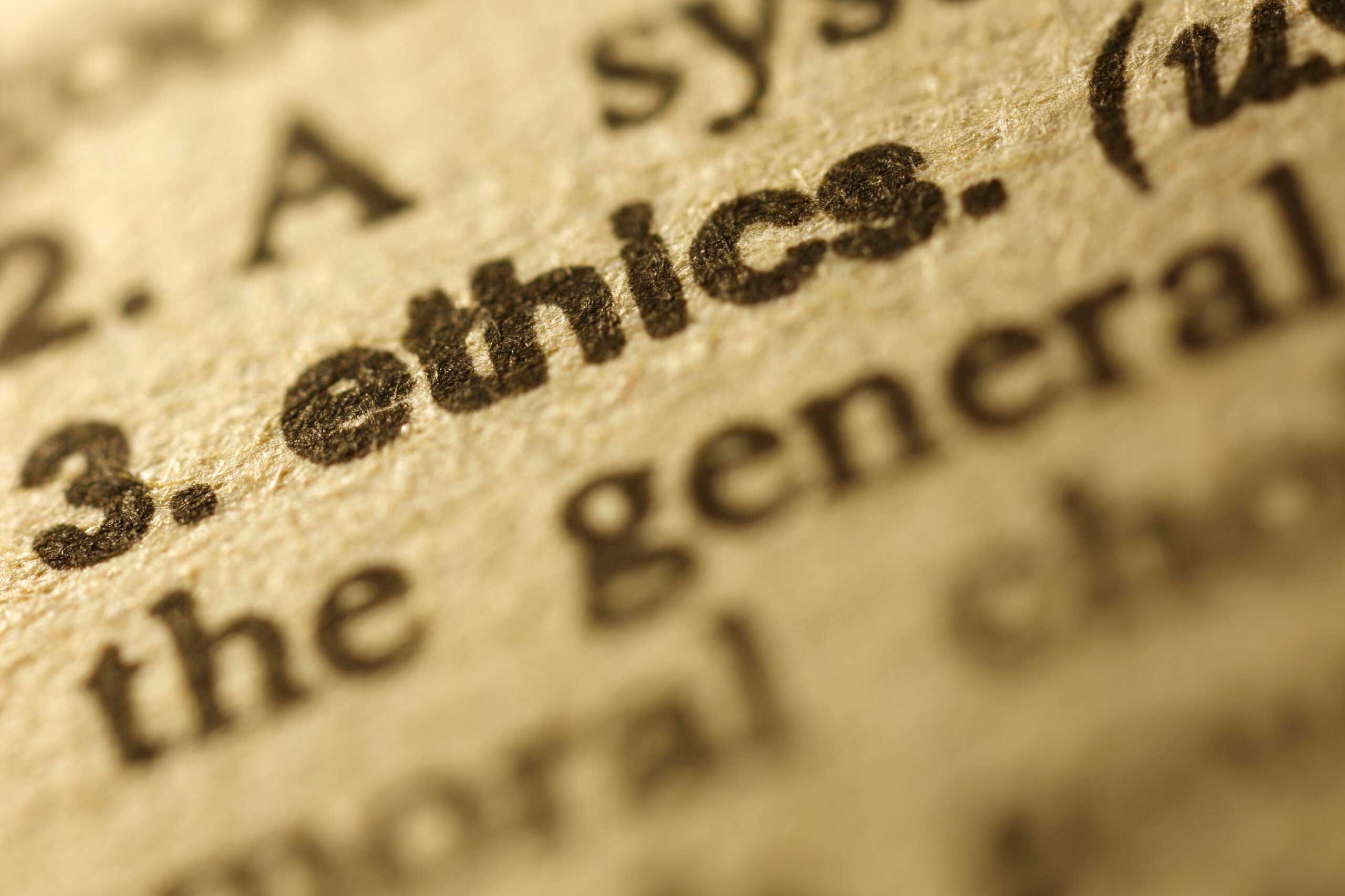 I’ve written previously about the rising importance of ethics in the selection of external counsel. Now I’ve got fresh proprietary data to back it up.

I’m continuously hearing that law departments want greater alignment with their external law firms. It’s no longer good enough for Biglaw partners to do good work and serve as golf buddies. Corporations are looking for a deeper connection and are threatening to hold law firms to account.

Yet, when I talk to in-house teams about this, there are varying levels of commitment. Yes, alignment is important, some say. But you know what’s more important? #winning.

This is starting to shift.

Last month, for instance, Kirkland and Ellis — the highest-grossing law firm in the world — announced that it was no longer going to be doing work in relation to the U.S. Second Amendment. This came in conjunction with the departure of two major partners who had worked with the National Rifle Association, on the back of their Supreme Court victory in favor of a gun group. Perhaps this was a broader reputational choice, but sources told the Wall Street Journal that K&E “started getting a lot of pressure post-Uvalde, hearing from several big-dollar clients that they were uncomfortable.”

Those two partners explained their point of view in a Wall Street Journal opinion titled “The Law Firm that Got Tired of Winning.” So, it seems, in today’s politically red-hot environment, winning is no longer everything. Corporations not only have these preferences, they are asserting them, and law firms are responding.

We at Hence commissioned Coleman Parkes Research to interview 150 general counsels, chief legal officers, and heads of legal operations across the United States and the United Kingdom on a host of issues that impact their usage of external lawyers, which we will make public in coming weeks. And probably moreso than any other question we put to them, they overwhelmingly agreed on this one ethics point.

Ninety-seven percent of corporate counsel leaders told us they would take action if they discovered a law firm they were working with did not meet their ethical or values criteria. This is surprisingly high — can you think of another issue that 145 GCs and CLOs would agree on? 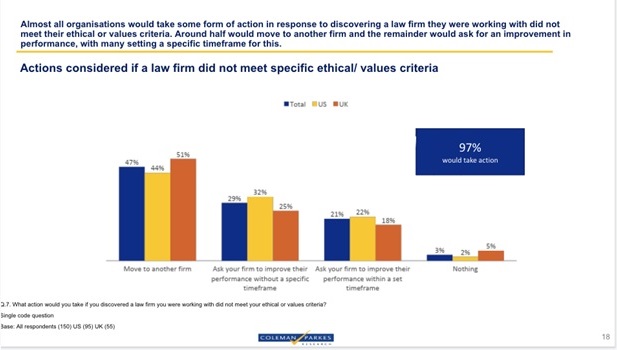 When we pressed further on what types of circumstances would impact usage of a given law firm, the data was even more interesting. Over 90% agreed that law firm involvement in a scandal, a law firm being subject to investigation, a law firm representing politically or publicly unfavorable clients, or a law firm supporting political or social goals that a corporate does not agree with or support would have some impact on their usage of the firm. As you can see in the table below, all of these factors would have a strong impact for at least half of counsel surveyed. 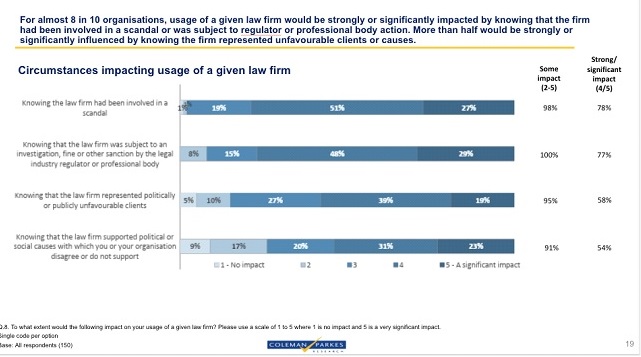 This was not uniform across the U.S. and the U.K. The number of individuals who said that particular factors would have a strong impact was much higher in the U.S. than the U.K. on every factor. 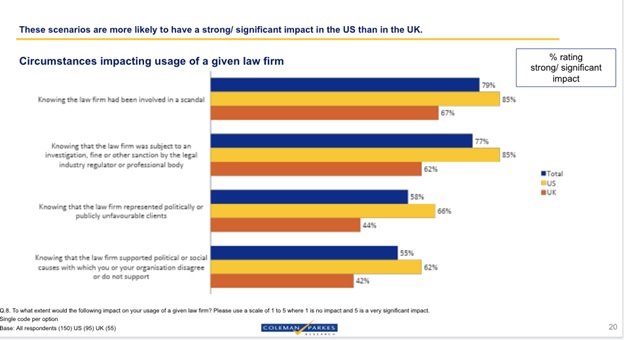 OK, so we’ve learned that legal department leaders are poised to take action when their law firms diverge from their values criteria. We’ve noted that those actions vary and that the particular factors we surveyed drew a stronger reaction in the U.S. than in the U.K.

The question that remains is now whether corporate law departments are actually aware of these violations of their ethics. As I’ve written about previously, many departments are able to ignore transgressions because they don’t have a system to keep track of how their counsel are behaving — they can authentically say they were unaware of something like the gun lobby example above for years and years until it becomes so problematic that they are made aware of it. With lawyers, this matters — lawyers literally “represent” their corporate clients, and their actions can set precedents that run counter to the values some of their corporate clients hold dear.

We use technology to monitor everything — from how many breaths we take when we sleep to whether every part of an airplane is operating optimally while in flight. We share data and monitor quality and ethics of our hard goods supply chains. Keeping track of our knowledge partners — like lawyers — is in no way more complex.

And stepping back a little a from the clickbait-y title, the reality is that law departments do care about winning. It’s just that the definition of winning and losing is changing. As companies are increasingly held to account for the actions of their partners, when a company chooses the wrong vendor — even for services — that can harm their own reputation in today’s hyper-connected world. The last thing an enterprise wants is to wind up in the news for using business partners who themselves are making headlines due to unaligned ethical choice.

At Hence, we’re always keen to hear from corporates who are tackling this challenge. Please be in touch if you’re one of the 97% and have winning approach or otherwise want to take action.

Sean West is Co-Founder of Hence Technologies, a software company that transforms how enterprises work with external counsel. He was previously Global Deputy CEO of Eurasia Group, the geopolitical advisory firm. He writes a biweekly column in Above the Law on geopolitics and the practice of law.