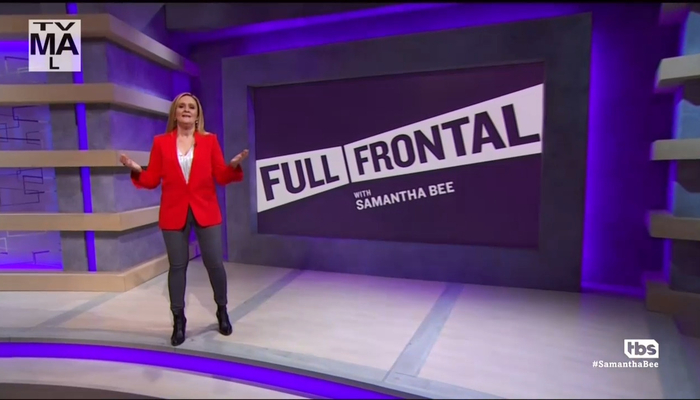 It’s over for Samantha Bee. Her run of sliming conservatives in the most vulgar terms is done, well at least at TBS. She still has Twitter to spew her hateful jokes.

On Monday, Bee took to her official show Twitter account to formally announce that TBS had canceled her show Full Frontal: “After 7 seasons, Full Frontal with Samantha Bee will not be returning to TBS this fall. We’re so thankful for our loyal audience, our amazing team, and that we got to annoy the right people every week….”

In seven seasons Bee did more than “annoy,” the “right people.” Most recently she used her platform to urge harassment of conservative Supreme Court justices — even after the assassination attempt on Brett Kavanaugh’s life.

Bee had a penchant for going over the line. So much so, she was forced to apologize multiple times. Probably her most infamous moment came in 2018 when she had to backtrack after calling Ivanka Trump the “c” word. There was also that time, in 2017, when she attacked a CPAC attendee for having “Nazi hair.” Bee later apologized to the attendee, Kyle Coddington, because it turned out he had stage 4 brain cancer.

Over the years the TBS host compared ICE agents to Nazis, used vulgar language about Republicans like House Speaker Paul Ryan and Texas Senator Ted Cruz and even prayed to God to hit the NRA with a “a plague of boils.”

The following are just some of the most obnoxious attacks on conservatives and sycophantic support of libs from Bee during her seven years hosting the now canceled TBS show, as culled from the MRC archives:

Wishing “Hell” on Conservative Justices, Even After Threat to Kavanaugh

“It is insane that a Supreme Court that doesn’t represent a majority of Americans will cause women more death and suffering….I can’t describe how painful it is to be here now in a place where the Supreme Court has the power to erase 50 years of constitutional law. Make no mistake, this is not where it ends. Conservatives will not rest until they have come for all of our rights. Everything we have fought for will be lost unless we take it back. It’s not just about voting in November. It’s about doing everything in our power to protect and help vulnerable people access abortion across state lines. And we have to raise hell in our cities, in Washington, in every restaurant Justice [Samuel] Alito eats at for the rest of his life, because if Republicans have made our lives hell, it’s time to return the favor.”
— Host Samantha Bee on June 24, 2022 Twitter promo for TBS’s Full Frontal.

Samantha Bee to Gun Owners: “Read the Room, Freaks!,” No Right to Your “Hobby”

“If you thought the unspeakable horror of last week might have convinced the NRA to cancel its annual circle jerk of a gun convention in [beep] Texas no less, you’d be wrong….Oh my God, read the room, freaks. To be fair there were some changes to the NRA’s lemon party. The Grand Old Night of Freedom Party was canceled after artists like Don McLean and Lee Greenwood took their one and only songs and pulled out. Unfortunately, when it comes to people whose parents we wished had pulled out, no such luck….If you’re surprised the NRA is still kicking around you’re not alone. It’s been in legal and financial jeopardy for years. But it turns out its ‘gun rights above all rights’ message has been so ingrained in the Republican Party, the GOP will still hold a gun gala just days after a school shooting.”
— Host Samantha Bee on TBS’s Full Frontal with Samantha Bee, June 2, 2022.

“For years we’ve known we have a gun violence epidemic in this country, but the past few weeks have been almost unbearable, and while you might think all of this would finally bring everyone together to do something, you’d be wrong and honestly, kind of dumb. Come on, this is America!…Human lives are not an acceptable cost for a hobby, unless your hobby is ritually sacrificing human lives, in which case, okay, I can at least follow the logic. I mean, that’s the whole point. Sadly, it’s not looking like things will get better soon.”
— Host Samantha Bee on TBS’s Full Frontal with Samantha Bee, June 9, 2022.

So What If Andrew Cuomo Was an “A**hole,” He Was Still Our Pandemic “Dad”

“There were many, many times, actually, during the pandemic, where we had big…. show-wide conversations about, how do we handle [former New York Governor Andrew] Cuomo? Because he’s super problematic. But the story about him out in the world was like, he’s a hero. And he’s the only person speaking about the pandemic in a fatherly way. And he is our dad….So it felt [like] a place where it wasn’t quite the time to be like, ‘Hey, just like, check it out, he’s actually an a**hole.’ We felt like we would just miss completely with our audience.”
— TBS Full Frontal host Samantha Bee on October 11, 2021 New York Times’s “Sway” podcast hosted by Kara Swisher.

Bee Begs Warren to Get Back in

“Trump wants to open up the nation by Easter because he clearly observes Christian holidays. For example, he gave up your grandparents for Lent.”
— March 24, 2020 tweet by TBS’s Full Frontal host Samantha Bee.

“Ivanka Trump, who works at the White House, chose to post the second most oblivious tweet we’ve seen this week. You know, Ivanka, that’s a beautiful photo of you and your child, but let me just say, one mother to another, do something about your dad’s immigration practices, you feckless c**t. He listens to you! Put on something tight and low-cut and tell your father to f***ing stop it!”
— Host Samantha Bee on TBS’s Full Frontal, May 31, 2018. Bee apologized the next day.

Bee Mocks Young Man for His “Nazi Hair”; He Actually Has Cancer

On the March 8, 2017 edition of TBS’s Full Frontal host Samantha Bee mocked a young man, Kyle Coddington at the 2017 CPAC conference for having “Nazi hair.” But the man’s sister shot back at Bee on Twitter, telling her he actually had stage 4 brain cancer.

In the segment Bee began by saying that “these days” she has “no fucking clue what conservatism means,” so she sent her correspondent Mike Rubens to CPAC to find out.

A video clip then plays of Rubens reporting from CPAC, complete with snarky voice-over mocking attendees for petty things like their appearance. At one point, Rubens says, “Last year, CPAC was dominated by Ted Cruz supporters and chirpy little shits with bow ties. This year, the bowties were gone, replaced with Nazi hair. Nazi hair, Nazi hair, fuck off.” Coddington’s face then appeared on camera.

Later, when Bee and her staff learned that the boy was suffering from Stage 4 brain cancer, they apologized and deleted the YouTube segment from their website before donating $1,000 to Coddington’s GoFundMe page.

In November 2018, Bee called now-disgraced Democratic New York Attorney General Eric Schneiderman a “superhero” before he was accused on May 7, 2018 of sexually abusing four women.

On May 8, 2018 Bee and her staff apologized for the fawning coverage and claimed they are “keeping this piece online in the interest of integrity.”

Back in 2017, Bee began the November 8 Full Frontal segment by stating “it’s only been a year since Donald Trump was elected president,” even though to her, it felt like a century. The liberal comedian then claimed as if she were describing a member of The Justice League: “President Bonespur has had more endurance than predicted, especially if you were predicting his endurance by literally looking at any photo of him being physical ever. But there is hope on the horizon: a hero who stood up to democracy’s nemesis before.”

Bee also used a phrase that’s associated with the Superman comic book character by declaring: “Look! Up in the sky! It’s a bird, it’s a plane!” before cutting to Schneiderman introducing himself as “the Attorney General for the State of New York.” Bee went on to air an embarrassing interview where she constantly flattered Schneiderman as a she asked “Are you going to lead us out of the darkness?”

On the May 23 edition of Full Frontal, Bee compared ICE (Immigration and Customs Enforcement) agents to Nazis. After beginning the segment by recalling that President Donald Trump held a meeting to discuss the issue of enforcing immigration laws, Bee maligned ICE as “the agency whose job application is just a single question asking if ‘the real hero of Schindler’s List was the girl shouting, “Goodbye, Jews!” She soon added: “Here’s a proposal: Let’s shut it the f*** down. I’m serious –  it’s awful, and we don’t actually need it.”

On the February 8, 2016 premier of Bee’s TBS program Full Frontal she berated Texas GOP Senator Ted Cruz as a “fish-faced, horseshit salesman” while playing with a noose.

On the April 18 edition of Full Frontal, Bee dropped “F” bombs on outgoing GOP House Speaker Paul Ryan as she told the Full Frontal audience:  “In the shadow of Trumpism, it’s more important than ever to distinguish between honorable people we disagree with and actual bad people, so I want to be clear. Paul Ryan is a bad person –  he has always been a bad person.”

She then claimed that, when he was first elected to political office in Wisconsin, “he was on the far-fringe right of conservatism” as she complained about his opposition to abortion and invoked former Missouri Republican Senate nominee Todd Akin’s “legitimate rape” comments from the 2012 elections. She then added: “He’s not a statesman – he’s a wingnut. Paul Ryan isn’t just leaving because he wants to spend time with his children –  he’s leaving because he made a big mess and doesn’t want to deal with the fallout. I guess it’s like that famous Ayn Rand quote: “Run, run, you f — ing coward.”

On the June 22, 2017 Full Frontal Bee zeroed on the Catholic Church’s opposition to a proposed “child victims act,” and contended that “if you’re an institution that has hurt so many children that paying out civil settlements would make you go bankrupt, maybe you should?” The left-wing comedian added, “Anyway, it’s fine. It won’t. You’re sitting on more treasure than Smaug the Dragon [a character in The Hobbit], so pay up.”

Bee Prays the NRA Is Plagued with Boils

On the June 14, 2016 edition of Full Frontal, Bee blamed the Second Amendment supporters for the Orlando nightclub shooting and insulted those who offered prayers for the victims, but then offered her own mock prayer: “Are you there, God? It’s me, Sam. Please, bless the victims and their friends and families in their time of unspeakable pain. Give us the courage to say no more and while you’re at it, please send the NRA a plague of boils. Amen.”

It shouldn’t be a surprise that her TBS show tanked given her classless attacks on at least half of the country. However, she will probably be picked up by another lefty outlet at some point. Because amongst the Hollywood elite you can be forgiven for lack of humor and even low-ratings, just as long as you are poking fun at the “right people.”