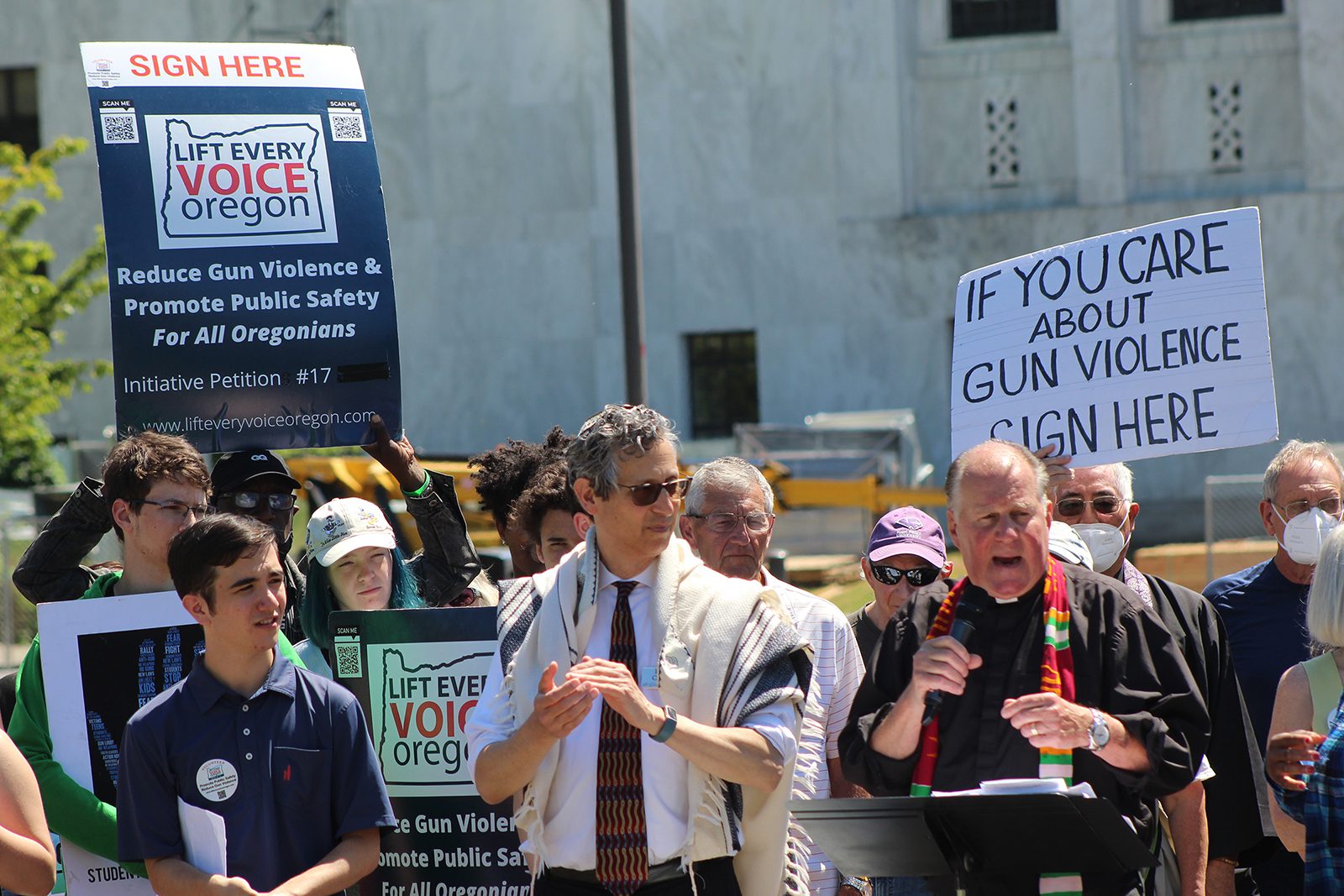 (RNS) — Oregonians will be voting on one of America’s strictest gun control measures on the ballot this November.

If passed by voters, the gun safety initiative would ban the sale of magazines with a capacity greater than 10 rounds and would require permits and firearm safety courses to purchase any gun. Applicants would have to pay a fee, submit to fingerprinting and pass a criminal background check.

Spearheaded by interfaith leaders, more than 1,000 volunteers secured the necessary signatures to get the measure on the ballot. Election officials said 131,671 signatures were validated, more than the minimum 112,080 that were needed, according to The Associated Press.

“As faith leaders, we count on volunteers. Our congregations are not run by big money,” said the Rev. Mark Knutson, a chief petitioner of the initiative and senior pastor of Augustana Lutheran Church in Portland, Oregon.

“Never underestimate what can come from a church basement, a synagogue, a mosque or a temple,” said Knutson, pointing to the significance of Dexter Avenue King Memorial Baptist Church in the civil rights movement.

The church in Alabama is where the Rev. Martin Luther King Jr. served as pastor and was the site of mass meetings to organize the Montgomery Bus Boycott.

Knutson is one of the leaders of Lift Every Voice, an interfaith organization committed to reducing gun violence. Christian, Buddhist, Muslim, Jewish and Native American spiritual leaders are part of the network that made a pact to organize around gun reform in the wake of the 2016 Pulse nightclub shooting in Orlando, Florida, that left 49 people dead.

The network officially formalized in 2018 after a gunman killed 17 people at Marjory Stoneman Douglas High School in Parkland, Florida.

Lift Every Voice previously sought to get a gun control measure on the ballot, before the pandemic stymied its 2020 efforts. It also brought forth a pair of bills in 2019 that did not make it through the Oregon Legislature.

This time around, a network of volunteers that Lift Every Voice has trained over the years began getting signatures for the ballot late last year. They did so at farmers’ markets, Pride events and when “Hamilton” toured in Portland.

The organization saw a rush of new volunteers after mass shootings in May left 10 Black people dead at Tops Friendly Markets store in Buffalo, New York, and 19 students and two teachers at Robb Elementary School in Uvalde, Texas.

“People were grieving. They were mourning after Uvalde, after Buffalo, but they found something they could do and that was this movement,” Knutson said.

There was so much energy around this movement that Knutson said about 13,000 people downloaded, signed and mailed the petition to be counted. “That’s when we could feel the momentum,” Knutson said.

The organization has also seen an increase in donations to its campaign.

Of the estimated 1,600 people working with the campaign, about 60 signature gatherers who came on board in May were paid workers hired through Osprey Field Services, a consulting agency that provides community outreach for political candidates and campaigns. Lift Every Voice employs two people, one who works full time and another part time. Volunteers are the heart of the movement, Knutson said.

Among the volunteers gathering signatures were congregants of Congregation Beth Israel in northwest Portland.

Senior Rabbi Michael Z. Cahana said congregants would get signatures at community gatherings such as their celebration of Martin Luther King Jr. Members of the congregation’s social action committee were among top signature gatherers.

“We had been told throughout this process that we really had no hope of success,” Cahana said.

“When we saw that we had surpassed our most optimistic goal of how many signatures we would gather, we were absolutely elated,” Cahana added.

Religious organizations, said Cahana, have the advantage of having “networks all over the state.”

“It’s easy for me to reach out to rabbis around the state … and encourage people to join the coalition to volunteer,” he said. “That part was really helpful, and the fact that there was already an interfaith relationship. We didn’t have to create that from scratch. We knew each other. We trusted each other.”

The Rev. Andrea Cano, the interim president of Ecumenical Ministries of Oregon, saw a range of people joining the gun control effort.

“While it was catalyzed by people of faith, it just really touched the hearts of everyone who aligns themselves with the sadness and the grief of such losses,” Cano said.

Now, Cano said, the focus will turn toward educating Oregonians about the measure.

The National Rifle Association’s Institute for Legislative Action has denounced the initiative on its website, saying “these anti-gun citizens are coming after YOU, the law-abiding firearm owners of Oregon, and YOUR guns.”

“This is outrageous. We allow our society to get to the point where we have to have drills in schools and churches — this commonplace risk of just going to the store for a loaf of bread and not being able to come home,” Cano said.

RELATED: In Oregon, churches and anti-fascists unite to provide mutual aid to fire evacuees and others in need