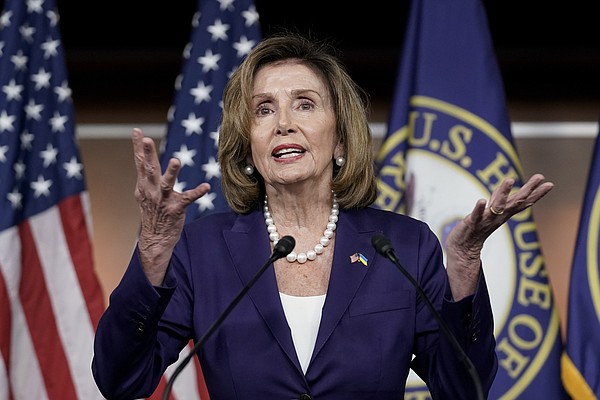 WASHINGTON — Responding to a string of mass shootings, a divided House passed a ban on certain semiautomatic rifles Friday, moving over the near-unanimous opposition of Republicans to reinstate a prohibition that expired nearly two decades ago.

Once banned in the U.S., the firearms are now widely blamed as the weapon of choice among young men responsible for many mass shootings. But Congress allowed the restrictions first put in place in 1994 on the manufacture and sales of the weapons to expire a decade later, unable to muster the political support to counter the powerful gun lobby and reinstate the weapons ban.

House Speaker Nancy Pelosi described the measure as a “crucial step in our ongoing fight against the deadly epidemic of gun violence in our nation.”

President Joe Biden hailed the House vote, saying, “The majority of the American people agree with this common sense action.” He urged the Senate to “move quickly to get this bill to my desk.”

However, it is likely to stall in the 50-50 Senate. The House legislation is shunned by Republicans, who dismissed it as an election-year strategy by Democrats.

Reps. Chris Jacobs of New York and Brian Fitzpatrick of Pennsylvania were the only Republicans who joined Democrats in supporting the bill, and five Democrats voted against the measure, which passed 217-213.

The Democratic lawmakers voting no were Reps. Kurt Schrader of Oregon, Henry Cuellar of Texas, Jared Golden of Maine, Ron Kind of Wisconsin and Vicente Gonzalez of Texas.

The bill comes at a time of intensifying concerns about gun violence and shootings in Buffalo, N.Y., Uvalde, Texas, and Highland Park, Ill.

“This is not a radical idea,” he added. “We are not in uncharted territory.”

Voters seem to be taking such election-year votes seriously as Congress splits along party lines and lawmakers are forced to go on the record with their views.

Biden was instrumental in helping secure the first semiautomatic weapons ban as a senator in 1994. The Biden administration said that for 10 years, while the ban was in place, mass shootings declined.

“When the ban expired in 2004, mass shootings tripled,” the statement said.

Republicans argued that AR-15-style weapons are popular sporting rifles that law-abiding citizens use for self-defense and hunting. And they dismissed the assault weapons bill as an attempt by liberals to trample on gun rights while doing nothing to address the root causes of crime.

“Let’s call this for what it is: It’s a gun grab, pure and simple,” said Rep. Guy Reschenthaler, R-Pa. “This bill is not about public safety. Rather, this is the most severe restriction on the Second Amendment since the passage of the assault weapons ban of 1994.”

Democrats argued that the ban on the weapons makes sense, portraying Republicans as extreme and out of step with Americans.

McGovern said the weapons ban is not about taking away Americans’ Second Amendment rights but ensuring that children also have the right “to not get shot in school.”

Pelosi displayed a poster of a gun company’s advertisement for children’s weapons, smaller versions that resemble the popular AR-15 rifles and are marketed with cartoon-like characters.

In one exchange, two Ohio lawmakers squared off.

Jordan replied by inviting her to his congressional district to debate him on the Second Amendment, saying he believed most of his constituents “probably agree with me and agree with the United States Constitution.”

The bill would make it unlawful to import, sell or manufacture a long list of semiautomatic weapons. Judiciary Committee Chairman Rep. Jerrold Nadler, D-N.Y., said it exempts those already in possession.

For nearly two decades, since the previous ban expired Democrats had been reluctant to revisit the issue and confront the gun lobby. But voter opinions appear to be shifting and Democrats dared to act before the fall election. The outcome will provide information for voters about where the candidates stand on the issue.

Jason Quimet, executive director of the NRA Institute for Legislative Action, said in a statement following the vote that “barely a month after” the Supreme Court expanded gun rights “gun control advocates in Congress are spearheading an assault upon the freedoms and civil liberties of law-abiding Americans.”

He said the bill potentially bans more than 24 million firearms “in blatant opposition to the Supreme Court’s rulings” that have established gun ownership as an individual right and expanded on it.

Among the semiautomatic weapons banned are those with a fixed magazine with the capacity to accept more than 10 rounds. The bill covers some 200-plus types of semiautomatic rifles, including AR-15s.

Democrats had tried to link the weapons ban to a broader package of public safety measures that would have increased federal funding for law enforcement. It’s something centrist Democrats in tough reelection campaigns wanted to shield them from political attacks by their Republican opponents that they are soft on crime.

Pelosi said the House will revisit the public safety bills in August when lawmakers are expected to return briefly to Washington to handle other remaining legislation, including Biden’s priority inflation-fighting package of health care and climate change strategies making its way in the Senate.

Congress passed a modest gun violence prevention package just last month in the aftermath of the tragic shooting of 19 school children and two teachers in Uvalde. That bipartisan bill was the first of its kind after years of failed efforts to confront the gun lobby.

That law provides for expanded background checks on younger adults buying firearms, allowing authorities to access certain juvenile records. It also closes the so-called “boyfriend loophole” by denying gun purchases for those convicted of domestic abuse outside of marriages.

The new law also frees up federal funding to the states, including for “red flag” laws that enable authorities to remove guns from those who would harm themselves or others.

But even that modest effort at halting gun violence came at a time of grave uncertainty in the U.S. over restrictions on firearms as the more conservative Supreme Court is tackling gun rights and other issues.

Although Friday’s vote united Democrats, the ban generated an intense internal debate that exposed party divisions over the issue of law enforcement and crime, a theme that Republicans have signaled will be a major element of their campaign attacks on Democrats before the midterm elections.

Democrats originally planned to pair the vote to ban the weapons with legislation that would provide more funding to local police departments.

Moderate Democrats from conservative-leaning districts argued that passing the police funding would blunt Republican accusations that Democrats are soft on crime and bent on defunding the police. But the police legislation drew criticism from progressives and members of the Congressional Black Caucus, who insisted that more police accountability measures should be included.

The Congressional Progressive Caucus learned late last night about the deal, infuriating members about not being involved in the process, according to multiple lawmakers and aides who spoke on condition of anonymity to detail private conversations.

Several members remained irate that they would have to vote to fund the police in order to vote on the weapons ban.

Numerous civil rights groups, including the ACLU, wrote letters to Democratic leadership Friday morning asking them to not consider Spanberger’s bipartisan bill, which is co-sponsored by Rep. Tom Rice, R-S.C.

Pelosi said Friday lawmakers would continue to work on the police legislation after returning to Washington later in the summer. But frontline Democrats were exasperated when leadership decided to postpone a vote on the public safety bills, according to several people familiar with the group’s discussions.

Many in the liberal caucus spent Friday morning pushing to uncouple the weapons ban from the public safety package and hold separate votes.

“We applaud Speaker Pelosi and House leadership for advancing the assault weapons ban for a standalone vote today,” said Rep. Pramila Jayapal who chairs the Progressive Caucus. “We are also pleased that this bill, which reflects the consensus of the Democratic Caucus, will move expeditiously while a separate legislative package on public safety continues to be developed and revised.”

Democrats were hoping to leave Washington on a high note having just helped pass a bipartisan bill to strengthen domestic manufacturing and technology and a deal in the Senate that includes priorities on tax, climate and health care reforms.

Many vulnerable Democrats were livid, threatening to sink a procedural vote that was necessary to pass the legislation.

Kind noted the increased funding for Department of Justice grants is something “my folks need more of back home.”

“Last minute legislating was never really a good way to put a package together, especially one that’s so important as this,” he said. “You would hope that there would be a little more time to vet and to consider some of the problems with the legislation before they just rush it to the floor.”

Information for this article was contributed by Lisa Mascaro and Kevin Freking of The Associated Press, Marianna Sotomayor of The Washington Post and by Annie Karni and Julian E. Barnes of The New York Times.

Speaker of the House Nancy Pelosi, D-Calif., speaks at a news conference as Democrats push to bring the assault weapons ban bill to the floor for a vote, at the Capitol in Washington, Friday, July 29, 2022. Pelosi says the House will consider the public safety bills on police reform later when the House considers the Senate reconciliation package. (AP Photo/J. Scott Applewhite)

Speaker of the House Nancy Pelosi, D-Calif., speaks at a news conference as Democrats push to bring the assault weapons ban bill to the floor for a vote, at the Capitol in Washington, Friday, July 29, 2022. Pelosi says the House will consider the public safety bills on police reform later when the House considers the Senate reconciliation package. (AP Photo/J. Scott Applewhite) 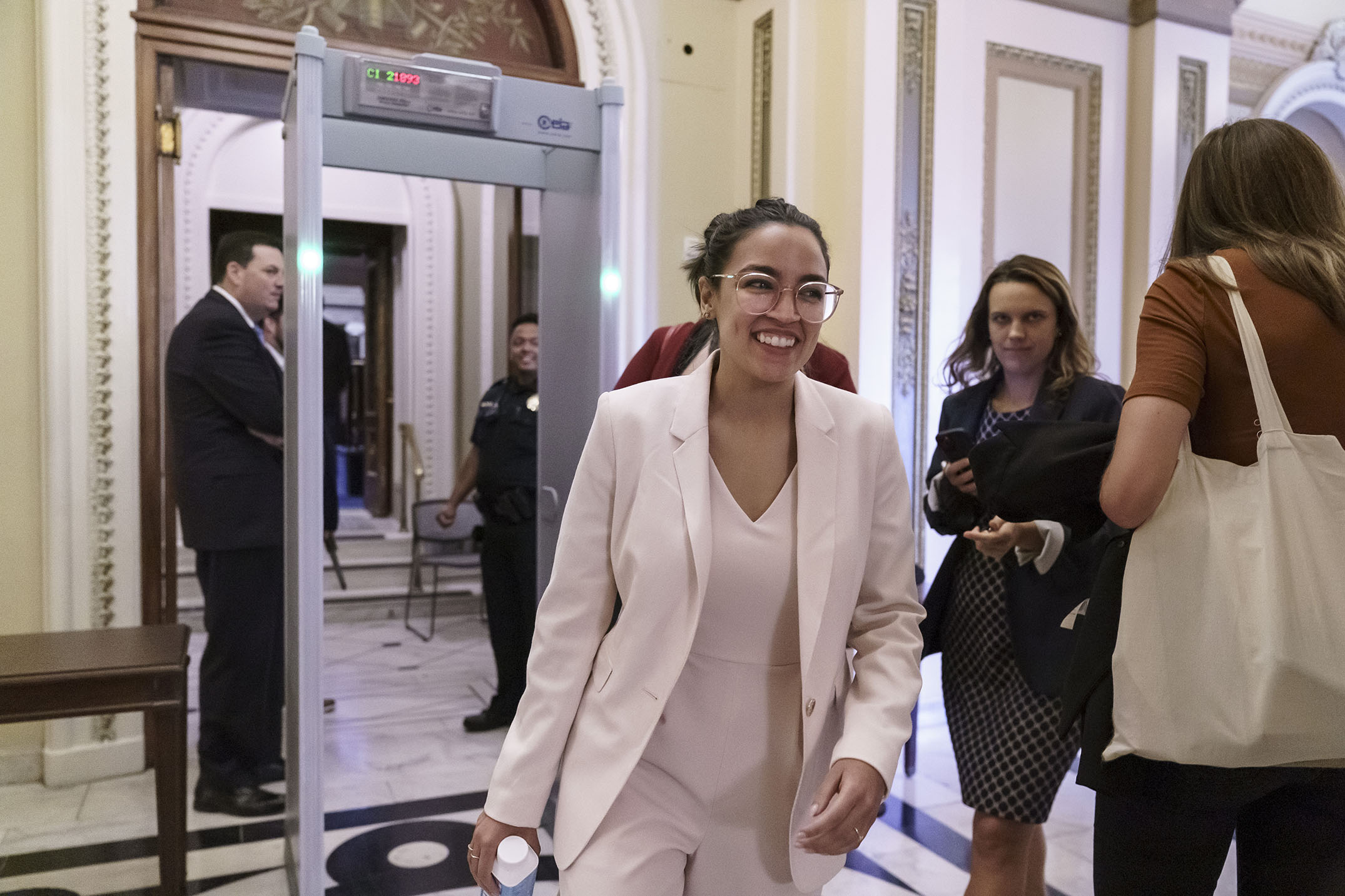 Rep. Alexandria Ocasio-Cortez, D-N.Y., walks outside the House chamber Friday as House Democrats push to bring the assault weapons ban bill to the floor for a vote. She and many others in the liberal caucus spent the morning working to detach the weapons ban from the overall public safety package to vote on it separately. (AP/J. Scott Applewhite)

Maloney, Nadler, Patel: Where candidates for NY-12 stand on guns, SCOTUS, inflation and more
When You’re Not Looking – 27 East
Biden and Pelosi Give Wrong ‘Facts’ About ‘Assault Weapon’ Ban
Brian Kemp Slams Stacey Abrams for Something She Didn’t Do — but He Did
In Their Own Words: Schultz, Stauber offer their views on mining, guns, energy, police – Duluth News Tribune