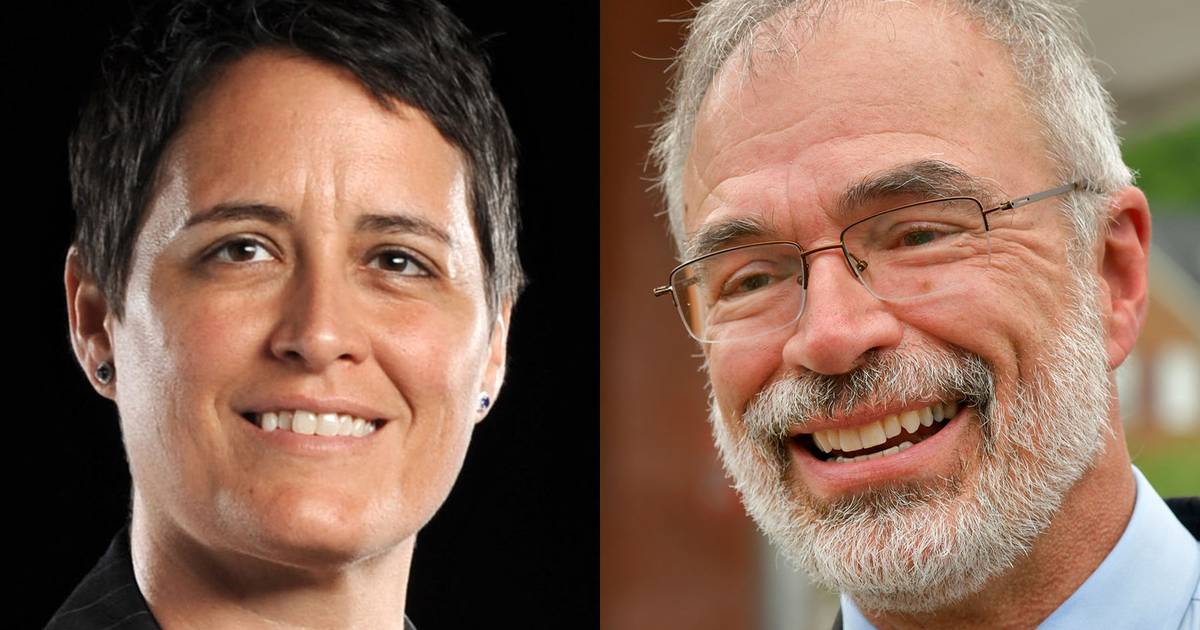 The Democratic congressional challenger walked up to the Republican candidates’ booth at the Cecil County Fair, smiled and introduced herself.

There, in a display hall surrounded by funnel cakes, corn dogs and tractors, she talked with a county Republican official about her platform of trying to bridge partisan political differences. Behind the booth hung banners with “GOP HQ” in red lettering, a gun raffle promotion and colorful signs for various Republican candidates, including U.S. Rep. Andy Harris, her opponent in the November election.

“I’m running a campaign that isn’t about whether we are Republicans or Democrats. It’s about solving problems,” Mizeur, who has been endorsed by national progressive groups, told the official. “If I had my way, we would get rid of the political parties. George Washington suggested that we never even have political parties.”

Mizeur (pronounced Miz-EER), a former state delegate and 2014 gubernatorial candidate, is leaning hard on that pitch. Five years after starting a nonprofit focused on overcoming political divisions, her nonpartisanship theme is a staple — an arguably necessary one — in her uphill effort to unseat Harris, 65, in the Republican-oriented 1st Congressional District. It covers the Eastern Shore, Harford County and a piece of Baltimore County.

Mizeur, 49, says she got into the race because of the recent actions of Harris, a sixth-term conservative loyal to former Republican President Donald Trump. She was living with her wife, Deborah, on their Kent County herb and chicken farm, when she heard Harris was among 147 lawmakers who opposed formal certification of President Joe Biden’s Electoral College win as Congress met on Jan. 6, 2021.

From that impetus to get into the race to the revelation last month that Harris was among nearly a dozen Republican members of Congress who gathered with Trump in December 2020 and discussed having Vice President Mike Pence reject the results of the presidential election, Mizeur has sought to remind voters of her opponent’s Trump ties and put them in the context of the violent Jan. 6 attack on the Capitol by other Trump supporters.

Even before she won the July 19 Democratic primary, her campaign seized on evidence from a House committee’s July 12 hearing about Harris’ attendance at the White House meeting. Within two days, she introduced a digital ad with a photo of Harris and a video of the Capitol mob.

Harris, for his part, said he didn’t watch the July 12 proceedings because he “was busy working on important issues like bringing down the price of gas and groceries and securing our communities against violent crime.”

Harris did not respond to Baltimore Sun requests for an interview for this article. Since running unopposed in the GOP primary, Harris has posted Facebook photos of himself after attending a string of county fairs, including in Cecil and Somerset, and other events in which he appears with and touts GOP candidates for local offices. Harris was quoted Monday in a state Republican Party news release saying “the stakes are high in this upcoming election,” that parents need a strong voice in their children’s educations, and police “need our support and not our condemnation.”

Mizeur, who defeated former Foreign Service officer Dave Harden in the primary, has called Harris a “traitor to our nation.”

But in a district that voted for Trump by about 20 points in 2020, she is plotting a narrow course of criticizing Harris without insulting members of his party.

“I don’t need to win all the Republicans,” Mizeur said in an interview with The Sun. “I need to win over Larry Hogan and Kelly Schulz Republicans, along with independents and Democrats,” she said, referring to the pragmatic governor who has clashed with Trump and the former Hogan administration commerce secretary. Schulz lost the GOP gubernatorial primary to Trump-endorsed Dan Cox.

Mizeur’s positions can be nuanced. On guns, for example, she favors safety initiatives — such as “red flag” laws to keep firearms away from potentially dangerous owners — but stresses that she grasps and respects “gun culture.”

“I have a fox right now that is terrorizing my hen house. I have a .22 and a 12-gauge [shotgun],” she said. “I believe in the Second Amendment. But with great rights come great responsibilities.”

Harris, a member of the conservative Freedom Caucus, has earned high marks from the National Rifle Association for his gun rights votes. In 2013, he held a “Bring your own Gun” fundraiser, inviting participants to take target practice.

It’s not clear whether voters will punish Harris or other Republicans who attended the White House meeting with Trump in advance of Jan. 6.

“I’m a little bit skeptical that they will pay a price,” said Flavio Hickel Jr., an assistant political science professor at Washington College in Chestertown. “There are individual dynamics for every race, but midterm elections so often are a function of party ID. The 1st District has been pretty consistent in its voting patterns. My hunch is a lot of attitudes are already locked in.”

Harris said the day after the Jan. 6 attack that he has “routinely and consistently rejected violent protests, whether in the case of yesterday, or last summer,” an apparent reference to racial justice demonstrations following the 2020 police killing of George Floyd in Minneapolis. Harris has objected to the Capitol attack being called an “insurrection.”

Harris’ race could be affected by the presence of Cox at the top of the GOP ticket. Cox, a state delegate, has supported Trump’s baseless theories of election fraud in 2020, questioned Maryland’s election processes, and tried to impeach Hogan over the governor’s COVID-19 mitigation measures.

Cox’s candidacy could bring out Trump supporters who also back Harris. Or it could depress turnout among other Republicans, said John Willis, a secretary of state in the administration of Democratic Gov. Parris Glendening.

“If you have a candidate who takes controversial positions on issues, that could have a negative impact on the turnout of members of your own party, but a positive effect on turnout of those who oppose you,” Willis said.

In March, a judge struck down a map approved by General Assembly Democrats under which Harris’ district would have extended across the Bay Bridge into an area with more Democrat voters. The map was offered as part of a redistricting process that occurs every 10 years.

The court-ordered replacement, which takes effect next year and is used to determine who votes where in the Nov. 8 election, boosted Republicans’ voter advantage over the Democrats’ initial map and decreased Mizeur’s chances of upsetting Harris.

“Were they diminished? Based on past numbers, yes,” said Willis, a University of Baltimore professor.

But Willis said the issue of abortion potentially became a factor — in Mizeur’s favor — when the U.S. Supreme Court in June overturned the landmark Roe v. Wade decision, which previously protected a right to an abortion under the U.S. Constitution.

“The abortion issue is highly emotional, highly charged and can have an impact on who shows up and votes,” Willis said.

Mizeur, an abortion rights supporter, said after the court’s June 24 ruling that it was “a dark day for America.”

Harris tweeted that the court “got it right.” In 2021, Harris, voted against legislation that would guarantee abortion protections nationally.

Harris reported raising $1.5 million during 2021 and the first six months of 2022, and had $1.8 million on hand as of June 29, according to Federal Election Commission records.

Mizeur, who doesn’t accept contributions from corporate political action committees, raised $1.9 million during the same period and had a cash balance of $1.1 million. She was a member of the House of Delegates representing Montgomery County from 2007 to 2015 and finished third in the 2014 gubernatorial primary, collecting 22% of the Democratic vote statewide.

She has received contributions from national Democratic groups that hope the party can retain its narrow House and Senate majorities at the midpoint between presidential elections.

“Andy Harris is an extremist Republican who has embarrassed our state by attempting to illegally overturn the results of a free and fair election,” said House Majority Leader Steny Hoyer, a Southern Maryland Democrat who has endorsed Mizeur.

Keep up to date with Maryland politics, elections and important decisions made by federal, state and local government officials.

Harris, an anesthesiologist who is the only Republican in Maryland’s 10-man congressional delegation, has routinely topped 60% of the vote in his previous reelection campaigns. He beat former Army intelligence officer Jesse Colvin in 2018, and Mia Mason, a military veteran and transgender activist, in 2020.

Harris pledged more than a decade ago to serve no more than six terms if elected. He filed for reelection for a seventh term last year, saying it was imperative that Republicans regain a House majority. “Let’s Save America from the radical progressives who are in control now,” he posted on Facebook after he filed.

No debates are scheduled between Harris and Mizeur. Cecil Public Media, a community organization in the county, says Mizeur has agreed to an October debate. But it has not received a commitment from Harris, said Doug Donley, an official with the group. Harris did participate with Colvin in a 2018 debate hosted by the group.

Harris’ supporters at the fair included farmer Claiborne Stubbs, a member of the Cecil County Republican Central Committee. It was Stubbs whom Mizeur approached at the GOP booth.

“She seems like a great person. Very levelheaded and professional and wants to do the right thing,” Stubbs said.

But he said he has history with Harris, and intends to vote for him.

“Andy Harris is a good friend of mine. My values are conservative and I know he represents the values that I represent,” Stubbs said. “But debate is healthy.”

A late word from Trump reframes CT GOP primary for U.S. Senate
Brian Kemp Slams Stacey Abrams for Something She Didn’t Do — but He Did
Outdoors calendar (through Aug. 27): What to see and do in Western New York | Outdoors
Where is the Republican courage on banning assault weapons?
Maloney, Nadler, Patel: Where candidates for NY-12 stand on guns, SCOTUS, inflation and more