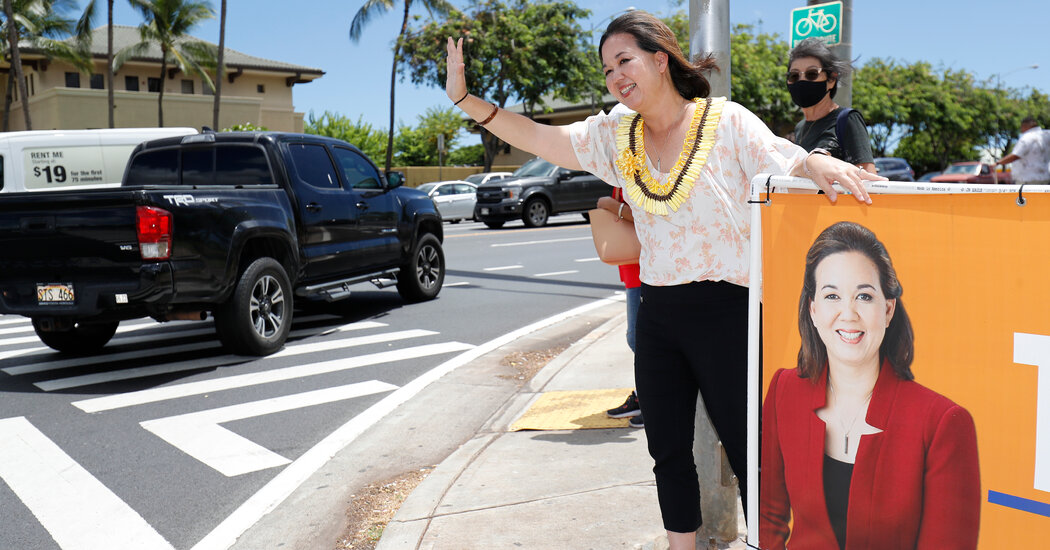 Jill Tokuda, a former state senator backed by the political arm of the Congressional Progressive Caucus, won the Democratic primary in Hawaii’s Second Congressional District, according to The Associated Press, after a sometimes vicious campaign that drew more than a million dollars in outside spending.

Ms. Tokuda defeated her top rival, Patrick Branco, a first-term state representative, and several others. She is expected to win easily in November against Joe Akana, the winner of the Republican primary, for the seat being vacated by Representative Kai Kahele, a Democrat who opted to run for governor but lost.

On paper, the two main candidates held similar positions, including support for abortion rights and for stricter gun laws. They both want Congress to codify the rights Roe v. Wade used to protect and to repeal the Hyde Amendment, which bans federal funding for most abortions.

Guns were perhaps the biggest issue in the race, with both Ms. Tokuda and Mr. Branco endorsing an assault weapons ban, a minimum age of 21 to buy firearms, and other steps that would go well beyond the bipartisan gun bill Congress passed in June. Much of their sparring was over who would be a stronger advocate for such measures. Outside groups supporting Mr. Branco ran attack ads condemning Ms. Tokuda over her 2012 endorsement from the National Rifle Association, though she subsequently supported gun control measures in the State Senate.

The primary drew a large amount of outside spending for a relatively off-the-radar House race. The support Ms. Tokuda received from outside groups — which, in addition to the Congressional Progressive Caucus, included Representative Pramila Jayapal’s Medicare for All PAC — was dwarfed by what Mr. Branco received, from organizations that included VoteVets, cryptocurrency groups and the centrist Mainstream Democrats.

More than a million dollars in spending by such groups gave Mr. Branco a financial advantage, even though Ms. Tokuda’s campaign raised more than three times as much as his in the most recent fiscal quarter, according to Federal Election Commission filings. In addition to the 2012 N.R.A. endorsement, pro-Branco ads attacked Ms. Tokuda for opposing a 2015 bill that would have banned pesticide spraying around Hawaii schools.

Beyond guns and abortion, Ms. Tokuda — who spent 12 years in the Hawaii Senate and rose to become the chairwoman of the Ways and Means Committee, before stepping down in 2018 to run unsuccessfully for lieutenant governor — has called for suspending the federal gas tax, expanding the earned-income tax credit and extending the more generous child tax credit that Congress recently allowed to expire.

In response to a questionnaire from The Honolulu Star-Advertiser, she emphasized the need for more federal funding for health care, education and housing in rural communities.

The Congressional Progressive Caucus endorsed her in June, saying in a statement at the time, “In Hawaii, Jill has led on affordable housing, education, women’s reproductive freedom and gun violence prevention, and she’ll do the same in Congress.”