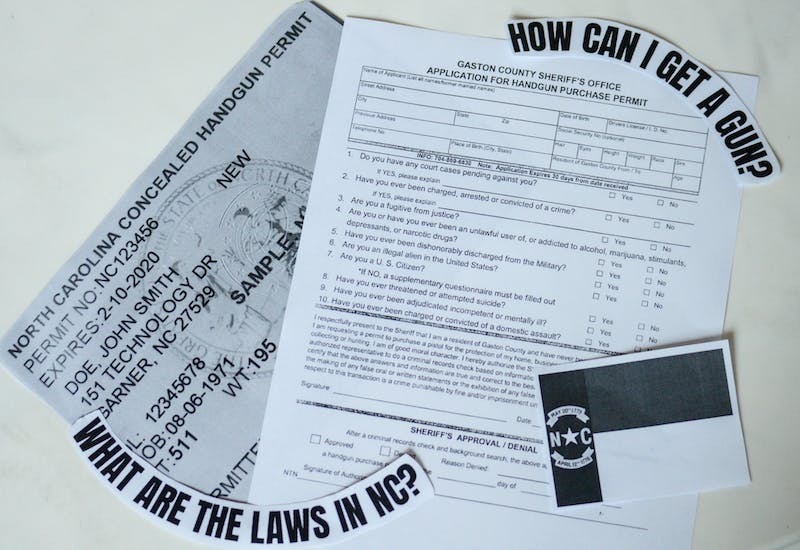 Following recent mass shootings, federal legislation and an increase in gun violence across the United States, some North Carolina legislators have called on the N.C. General Assembly to take action.

Recently, the U.S. House of Representatives passed legislation to ban assault weapons, such as AR-15s and other semi-automatic firearms. However, the legislation is widely expected to get struck down in the U.S. Senate, which is evenly split between Democrats and Republicans. The bill will likely not be able to win over the 10 Republicans needed to overcome a filibuster.

With the federal government’s stalemate in mind, North Carolina residents might have questions about how restrictive — or lenient — North Carolina’s gun laws are.

Compared to the rest of the U.S., North Carolina’s regulations fall in the middle ground.

North Carolina does not currently have universal background checks, which refer to background checks on all gun sales and transfers between private parties, including at gun shows and online.

The state does not require private sellers to conduct checks on transfers of long guns. However, the state has permit-to-purchase laws, which stipulate that no one can purchase a handgun without a permit.

According to the Giffords Law Center to Prevent Gun Violence, an organization that promotes stronger gun regulations, just eight other states have these laws.

Federal law requires background checks on individuals who purchase guns from federally licensed firearms dealers, but not for those buying guns from private, unlicensed sellers.

“If you go to a gun store or if you just purchase it from a private seller, you need to have a permit to possess that gun, to carry that gun,” he said.

Willinger added that North Carolina is a “shall-issue” state, which means that if an applicant meets certain criteria, then a local sheriff must issue a concealed handgun permit.

The criteria include: U.S. citizenship, state residency for 30 days or longer, an age minimum of 21 years, no “physical or mental infirmity that prevents the safe handling of a handgun” and the completion of an approved firearms safety and training course.

“Within this shall-issue category, it’s somewhat stricter in that you still actually need to go to the local sheriff and get a permit in order to carry a concealed weapon,” he said.

“We don’t have an extreme-risk protection law,” she said. “We don’t have any restrictions on assault weapons or large-capacity magazines, we use open-carry in the state, we have limited community violence intervention funding.”

Giffords gave North Carolina a C- ranking in its 2021 Annual Gun Law Scorecard, which ranks 21st in the nation among all 50 states.

Many pro-gun control legislators and advocates in the state say that they are dissatisfied with the lack of progress in the General Assembly.

Ceartas said N.C. House Bill 427, which would have required the North Carolina Department of Health and Human Services to implement a firearm safe storage awareness initiative, illustrates the lack of progress in North Carolina on gun safety legislation.

While the legislation passed in the N.C. House of Representatives in a 116-1 vote in May 2021, it has stalled in the state Senate.

“Common-sense gun safety measures that everyone can get behind still is not passing at the General Assembly, and that is incredibly tragic,” Ceartas said.

N.C. Sen. Mujtaba Mohammed (D-Mecklenburg) said he does not believe that Republicans in the General Assembly are taking the necessary actions to protect North Carolinians from the threat of gun violence.

Mohammed pointed out that there have been almost 500 mass shootings nationally in 2022 and 27 school shootings, leading to the deaths or injuries of 83 students. He said these events were reasons to restrict assault rifles.

“If you can’t buy alcohol until you’re 21, I don’t think you should be able to buy an assault rifle at 18,” Mohammed said.

N.C. Sen. Natalie Murdock (D-Durham) said she believes the federal government needs to be involved in an assault weapons ban, pointing out that people intending to purchase assault weapons could go to a nearby state to do so.

N.C. Rep. Kelly Hastings (R-Cleveland, Gaston) said it is already challenging for someone to own a firearm in North Carolina

“Criminals don’t care what the laws are,” he said. “They’ll use whatever they can get their hands on as an assault weapon.”

Steven Greene, a professor of political science at N.C. State, said the politics of the issue have changed in recent years, and that some Democrats in North Carolina used to be more pro-gun than they are now.

“It was seen that if you didn’t get an ‘A’ from the NRA, you couldn’t win statewide office in North Carolina, period,” he said. “But that has changed, and who the Democratic coalition is has changed.”

He added that the issue of guns more broadly represents the urban-rural political divide and the changing political landscape in the state.

To get the day’s news and headlines in your inbox each morning, sign up for our email newsletters.