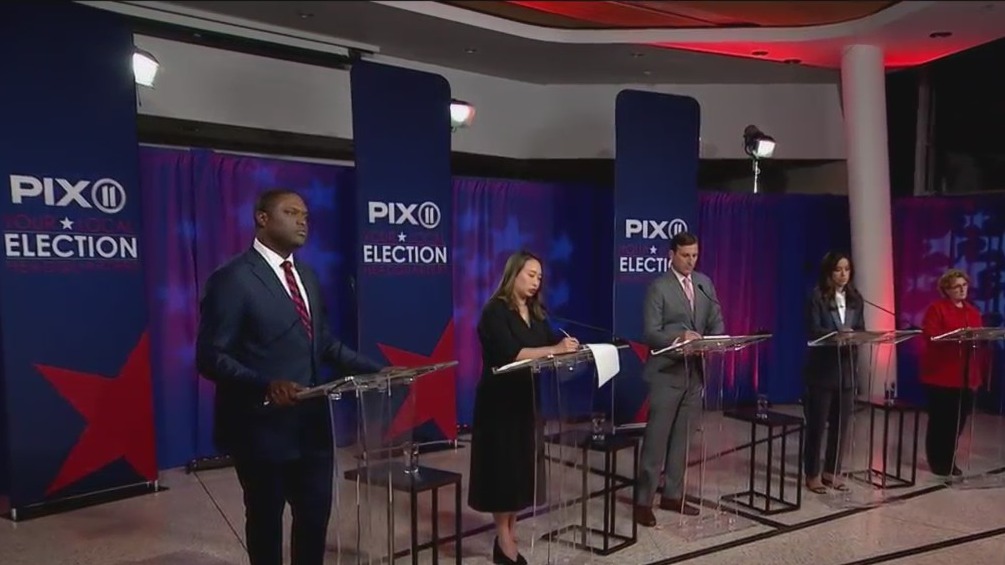 NEW YORK (PIX11) — As the governor of Texas continues to send migrants to New York City, candidates running to represent parts of Manhattan and Brooklyn in Congress fired shots on immigration and argued for reforms.

The Democratic candidates running to represent the 10th Congressional District in New York’s primary election want more federal intervention in the immigration crisis, they said Wednesday during a debate hosted by PIX11. The governor of Texas has sent buses of migrants to New York City.

“We absolutely have to be a city that accepts refugees, that accepts migrants coming here seeking opportunity and a better life,” City Councilwoman and NY-10 candidate Carlina Rivera said.

Rep. Mondaire Jones, who currently represents New York’s 17th District but is now running for the 10th, wants more federal resources for the issue. But when asked about it, he focused an attack on Daniel Goldman, a candidate just endorsed by former President Donald Trump.

“This is not someone you want to send to Congress if you care about solving the immigration crisis in this country,” Jones said.

Goldman did not respond directly to Jones’ comment about immigration. He did say immigrants are the lifeblood of New York City. Goldman wants to double the number of immigration judges who can handle asylum claims at the border. He also wants to increase the number of visas. He criticized Texas Gov. Greg Abbott for using migrants as “political pawns.”

Jo Anne Simon, a current member of the state Assembly, wants the government to intervene in the migrant situation. She wants to decriminalize people entering the country without authorization.

“What we do need is to be humane and clearly what Governor Abbott is doing is entirely inhumane and cruel,” she said.

Yuh-Line Niou, also a member of the state Assembly, wants investments in legal defense funds for immigrants. She also wants to stop detentions at the border and the separation of families.

“We need to have real immigration reform but the Republicans have villainized and demonized immigrants [for] coming to this country,” she said.

Watch the debate in the video player below

The candidates also touched on a slew of other issues in the debate, which was run in partnership with CUNY Medgar Evers College. Candidates faced questions from PIX11’s Ayana Harry, Henry Rosoff and Dan Mannarino. Here are four additional takeaways from the NY-10 Primary debate:

1 – Crime, guns and the Iron Pipeline

Crime is one of the biggest concerns for New Yorkers and Simon took a stance that has been criticized by many. Bail reform was widely supported in New York, but it’s since been blamed for a rise in crime. Simon doubled down on her support during the debate.

“Bail in New York is about returning to court. It is not about punishing people,” she said. “If you have money, you are let out on bail. If you don’t, you get sent to Rikers. That is fundamentally unfair.”

When it comes to guns, she called for federally funded research into gun violence. Simon also wants to see it addressed as a public health crisis.

“We have a mental health crisis unfolding in our city and across the country and we have to address that as an urgent priority,” she said.

“New Yorkers deserve to feel and to actually be safe,” he said.

Goldman feels a “whole of government approach” is needed to combat gun violence.

“Just doing this on the federal level will not be sufficient,” he said.

Abortion was a hot topic during the debate. Goldman has come under fire over comments he made to Hamodia. During that interview, Goldman said he would not object to a state law barring abortions after a healthy fetus is considered viable, as long as there wasn’t risk to the mother and there was no concern regarding rape or incest.

During PIX11’s debate, he said the decision to get an abortion “should be only between a woman and her doctor.”

“If it were up to me and I were writing the laws, I would have no restrictions,” he said.

With inflation continuing to hit New Yorkers’ wallets, the candidates offered a variety of solutions. Niou wants federal stimulus checks and programs to help with rent. She also said there shouldn’t be “gimmicks” like gas tax holidays.

Simon agreed that it could be time for another stimulus check, but said Congress needed to work to address structural income inequality. She called for a focus on providing jobs and investing in housing.

Goldman noted the supply chain is not keeping up with demand. He called for the government to help boost supply. Goldman also wants to increase social security payments and build more affordable housing. He also supports a tax on the ultra-wealthy, noting it would be detrimental to him.

Given the financial struggles many New Yorkers are facing, Jones said he voted for and helped pass the last round of stimulus checks because he knows the “economic pain” firsthand. He said the American Rescue Plan also delivered the expanded child tax credit, provided rental assistance, and kept small businesses open via the Paycheck Protection Program.

The candidates almost universally supported a federal takeover of the Rikers Island jail facility. Rivera said she would consider it.

“The city has absolutely lost control,” she said.

Niou, Jones and Simon also stressed that even with a takeover, Rikers still needs to be shut down.

Early voting kicked off on Saturday and runs through Aug. 21. Primary day is Aug. 23.