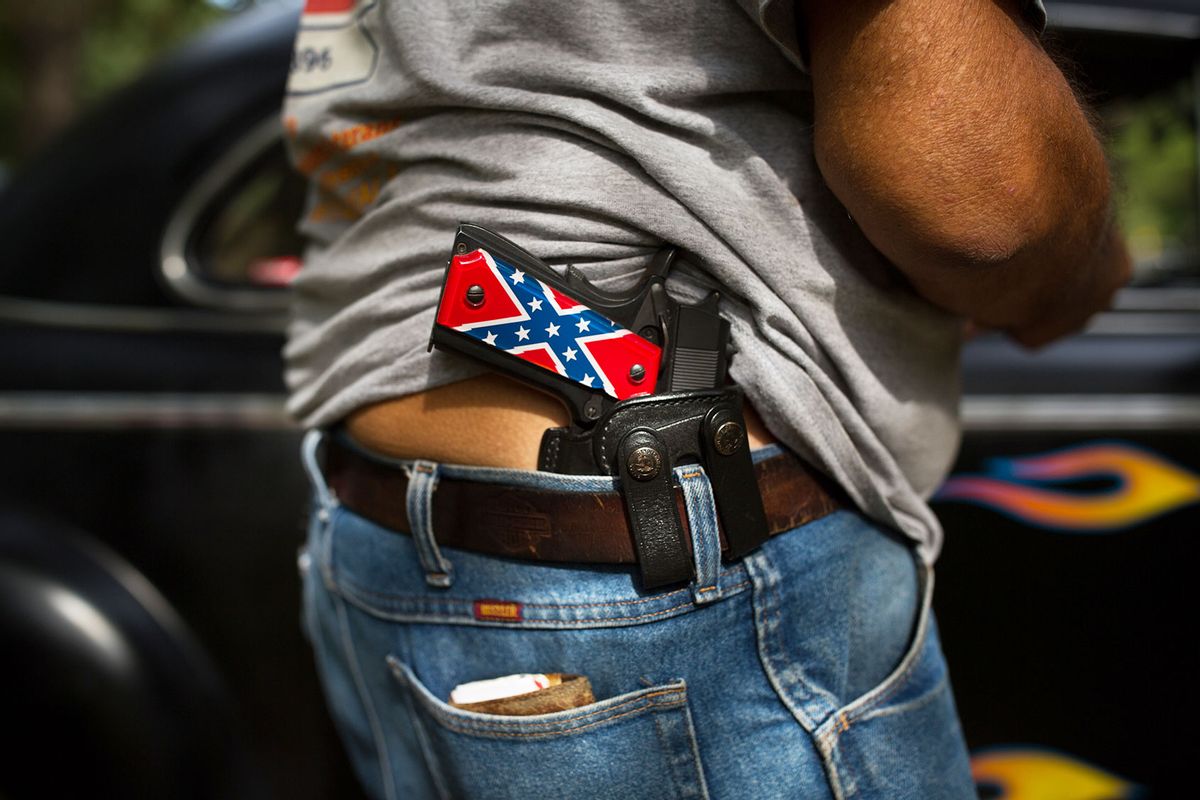 Though the Civil War was over 150 years ago, the social fabric of the United States still suffers from the country’s former divisions. Cultural and political values are split between the so-called free counties and the former slave counties, which existed in 15 states (only 11 of which seceded during the Civil War). Now, a new study has shown one of the most peculiar, yet perhaps unsurprising, divisions between former slaveholding and free parts of the U.S.: the prevalence of slavery in a given county correlates closely to the prevalence of firearms owned by its residents.

The researchers, led by psychology professor Dr. Nicholas Buttrick of the University of Wisconsin-Madison, hypothesize that this correlation exists because of the Reconstruction period in American history, which occurred immediately after the Civil War — “a moment when a massive upsurge in the availability of firearms co-occurred with a worldview threat from the emancipation and the political empowerment of Black Southerners.”

Certainly that would explain why the correlation between slave ownership in 1860 and firearm ownership exists today, even when weighed against variables like “contemporary crime rates, police spending, degree of racial segregation and inequality, socioeconomic conditions, and voting patterns in the 2016 Presidential election,” as well as why the data is “partially mediated by the frequency of people in the county reporting that they generally do not feel safe.”

Speaking to Salon at first by email, and then later over the phone, Buttrick explained why there are only some occasions where worrying about safety wound up corresponding to gun ownership.

“We think that protective gun ownership — the belief that guns are the sort of thing that keeps a person safe — may have some of its roots in attitudes formed by the institution of chattel slavery and its dissolution after the Civil War.”

“We think it’s especially interesting that it’s only in areas with historically-high rates of enslavement or areas that are socially-connected to the same where we find that higher rates of feeling unsafe predict higher rates of gun ownership,” Buttrick said. “For the rest of the country, we find almost no relationship between safety and gun ownership. In other words, we think that protective gun ownership — the belief that guns are the sort of thing that keeps a person safe (and the dominant gun culture in America) — may have some of its roots in attitudes formed by the institution of chattel slavery and its dissolution after the Civil War.”

Buttrick emphasized that the study only establishes correlation. In addition, while connections to historic slave culture influence modern gun culture, these connections are hardly the only influence — or even the primary one.

“Modern American gun culture is a cocktail of a bunch of different ingredients, and even in our best models, the amount of variance explained by the impact of patterns of slavery isn’t very big,” Buttrick pointed out. “It’s about as big as the impact of people voting for Trump in that county. So it’s not nothing, but there’s a lot of variance that slavery doesn’t have anything to do with.”

“We’re not saying that [gun culture] is racist,” Buttrick later added. “We’re saying it’s racist in origin, but also it’s pretty clear from a lot of work that gun culture in America, if nothing else, is racialized.”

This is not the first recent study to highlight the connection between Americans’ thoughts on race and their likelihood of owning guns. A study released last week by the American Psychological Association, and published online in the Journal of Experimental Psychology: General, found that white Americans who had expressed racial resentment were less likely to support gun rights if they were led to believe that African Americans were more likely to have guns. Specifically, white Americans who had expressed anti-Black sentiments tended to see white faces and link them with phrases like “National Rifle Association” and “self-protection” — but saw black faces and thought of weapons bans and waiting periods. A 2013 study published in the journal PLOS One, found that white Americans who held racist views about African Americans were more likely to own a gun and support concealed carry permits.

Indeed, as American history progressed, so has the intersection between gun politics and racial politics. In the late 1960s, when the Black Panthers began openly brandishing weapons to put a check on police violence, conservatives pushed for bills like California’s Mulford Act of 1967, which imposed harsh new gun control measures and was signed into law by Gov. Ronald Reagan. By the late 1970s, however, right-wing radicals had hijacked control of the National Rifle Association (NRA) — which had traditionally been more of a sportsmen’s club — and turned it into a vehicle for spreading anti-government conspiracy theories tinged (or more than merely tinged) with racism. When Reagan was elected president in 1980, he did so as an opponent rather than a supporter of gun control.

about guns and gun control

ILA | New Mexico: Gun Control Bills on the Move this Week in Santa Fe!
Father of child killed in Parkland shooting spars with Gavin Newsom over gun rights: ‘Sit this one out’
Assault-weapon ban in RI is part of new bill coming to the legislature
GOP congressman seeks alternate legislation to Equal Rights Amendment | A LOOK BACK | News
House members replace U.S. flag lapel pins with those depicting an assault rifle