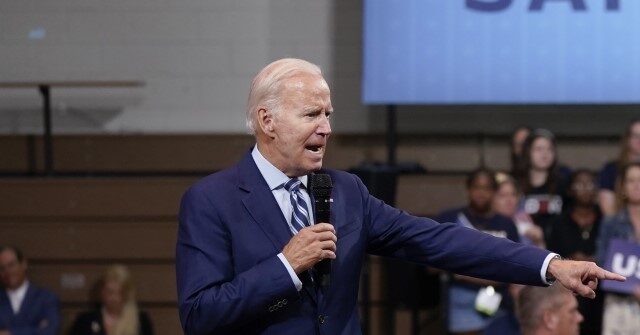 President Joe Biden screamed, “I am determined to ban assault weapons in this country!” during a Tuesday speech in Wilkes-Barre, Pennsylvania.

He built toward a crescendo as he claimed “the vast majority” of Republican members of Congress could not support Cornyn’s gun control because the NRA was against it.

Biden said, “Law enforcement supported [the ban], faith leaders and teachers supported it, young people in this country, like the students in this great university, support it, and the NRA and the vast majority of Congressional Republicans voted against it. But guess what, we took on the NRA and we’re going to take them on again and we won and we will win again.”

The crowd applauded and, as they did, Biden screamed, “But we’re not stopping here. I’m determined to ban assault weapons in this country. Determined.”

He added, “I did it once before and I’ll do it again.”

On August 26 Breitbart News reported on Biden’s pledge that “assault weapons” will be banned if Democrats pick up two Senate seats in the November elections.

An NSSF press release sent to Breitbart News indicated the estimated number of AR/AK-Style firearms in circulation is 24,446,000.