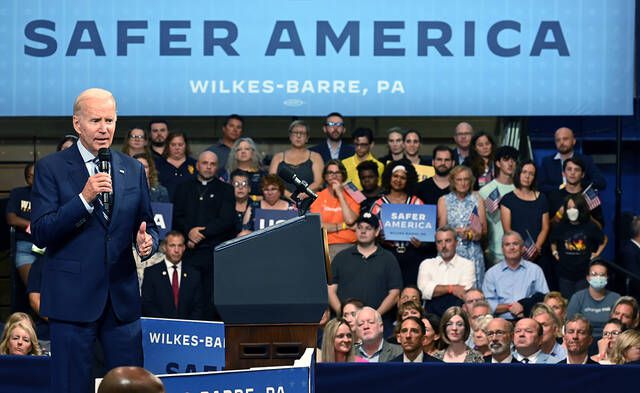 WILKES-BARRE — President Joe Biden Tuesday said Americans want to feel safe again and with the passage of his $37 billion Bipartisan Safer Communities Act, communities across the country will return to that way of life.

Biden spoke at Wilkes University’s Marts Center Tuesday to celebrate the Bipartisan Safer Communities Act and to tell everyone how he believes it will make communities here in Pennsylvania and across the United States safer.

Biden detailed his plan to a crowd of approximately 700 and he emphatically spoke as he hailed the plan and boasted that he took on the National Rifle Association, “And we won.”

“We beat the NRA” Biden said. “We took them on and beat the NRA straight up. You have no idea how intimidating they are to elected officials. We’re not stopping here. I’m determined to ban assault weapons in this country. Determined. I did it once before. And I’ll do it again.”

Biden is the first president in nearly 30 years to garner bipartisan support on a comprehensive gun violence prevention package. He signed the Bipartisan Safer Communities Act into law in late June. Gov. Tom Wolf advocated for the package as it moved through Congress, and shared his relief when it was signed into law.

Biden’s plan calls for the hiring of 100,000 police officers across the country and it provides funding for training and equipment for law enforcement.

Biden also strongly defended the FBI — noting that the agency and its employees have come under heavy criticism and threats of violence since executing a search warrant at former President Donald Trump’s Florida residence earlier this month.

“It’s sickening to see the new attacks on the FBI, threatening the life of law enforcement and their families, for simply carrying out the law and doing their job,” Biden said. “I’m opposed to defunding the police. I favor funding the police.”

Biden recalled his days growing up in Scranton when “cops walked the beat” and they knew everyone in the neighborhoods. He said police today have to “get out of their cars” and meet people.

“There has to be trust between police and the community,” Biden said. “You have to work on that together and build that trust.”

The president also talked about his administration’s crime-prevention efforts and to continue to pressure Congress to revive a long-expired federal ban on assault-style weapons.

• Clarifies the definition of a “federally licensed firearms dealer” to crackdown on criminals who illegally evade licensing requirements and clarifies which sellers need to register, conduct background checks, and keep appropriate records.

Wolf said Pennsylvania is expecting $48.7 million from the package to increase funds for existing programs, including​ an estimated:

• $41.7 million for the Student Support and Academic Enrichment Block Grant for safe and healthy school programs and effective use of technology.

“We need to fund police who walk the beat, know the neighborhood, are accountable to those they are sworn to serve, and build community trust and safety,” Biden said, “We need to invest in mental health and substance use treatment services, crisis responders, and social workers to reduce the burden on police officers, connect people with community resources, and prevent violent crime. We need to expand community violence interventions.

“We need to enforce our commonsense gun laws, require background checks for all gun sales in order to keep firearms out of the hands of felons and domestic abusers, and ban assault weapons and high-capacity magazines — weapons of war that have no place in our communities.”

Biden raised his voice several times to make his points. He said Republicans can’t claim to be pro-police without condemning the events of Jan. 6 — that statement received a standing ovation Most of the crowd remained standing from then on until the end of Biden’s speech.

Banners emblazoned with the “Safer America” slogan and the silhouette of police officers were placed to the left and right of the stage. Audience members held signs with the same phrase, as was the podium. The gym’s scoreboard was set at 46-46, — Biden is the 46th U.S. president.

Biden strongly favors funding mental health services. He said he believes in “paychecks instead of pistols.”

Biden said Congress has more work to do. He said Congress needs to give ATF the resources it needs to crack down on gun traffickers and gun dealers willfully violating the law.

After his speech, Biden slowly made his way to the crowd, stopping for photos and shaking hands.

Many people commented that the President looked well and spoke “like a true leader.”