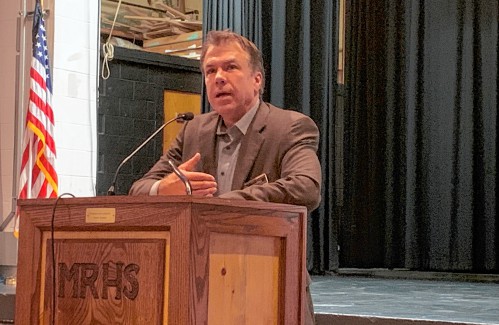 Candidates on the primary ballot in New Ipswich were quizzed on their stances on abortion and education, including concepts such as Critical Race Theory or “divisive concepts,” during a candidate forum at Mascenic High School Tuesday.

The event was not a debate, but offered candidates the opportunity to speak on their platforms and take questions from the audience. It featured statements from candidates for the newly redistricted Hillsborough District 32 House seat, with three seats representing Wilton, Temple and New Ipswich, as well as two gubernatorial candidates and a candidate for the U.S. Senate.

All candidates who spoke during Tuesday’s forum will be on the ballot for New Ipswich voters during the upcoming state primary election on Sept. 13.

Primary winners will be on the ballot for the state general election on Nov. 8.

On the Republican primary ballot, the race for Hillsborough District 32 will be contested, with incumbents Jim Kofalt of Wilton and Diane Kelley of Temple, as well as Shane Sirois of New Ipswich and Philip Andrews of New Ipswich.

Andrews did not attend Tuesday’s forum, but did have a representative read a statement written by him. In his statement, Andrews said he was running in response to what he saw as government overreach in the past few years.

“When people become more afraid of their government than its enemies, a change in leadership is necessary. Over the past two years, we have seen what can happen with unrestrained government, one who can enact emergency orders with a stroke of a pen and no accountability,” Andrews wrote.

Kelley was pressed on a vote in March, when she was one of 13 lawmakers to vote for a proposal that New Hampshire secede from the United States. When asked if she would make the same vote again, or support secession from the United States, Kelley said there were circumstances where she would, saying that the federal government had “run amok.”

“We have the right to govern the way we want, and I don’t want what’s happening in Washington right now,” Kelley said.

Kelley and the rest of the Republican candidates were asked about their views on abortion after Roe v Wade was repealed. All said they were pro-life candidates who believe life begins at conception. Sirois attributed his stance to his faith.

Several candidates also detailed their belief in medical freedom, including Kofalt, who said he was against vaccine mandates and was a cosponsor of a bill to make ivermectin, a anti-parasitic drug that became sought after as a potential treatment for COVID-19, despite not being authorized or approved by the FDA for that use, available at pharmacies.

When asked if there was a disparity between their advocacy for medical freedom and their views on reproductive rights, Kelley and Kofalt has a similar answer – that there is more than one individual’s rights at stake.

“You have every right to do what you want with your body, but when you’re pregnant, there’s another body involved,” Kelley said. When asked about any exemptions, such as in the case of rape, or where the fetus was not expected to survive, Kelley said that in “extreme” cases, there could be a court process for exemptions.

Kofalt focused on his voting record during his time in the House, noting particularly his votes to reduce taxes, including the room and meals tax, and a plan to phase out the interests and dividends tax.

“I am a huge pro-gun advocate,” Sirois said.

Kofalt pointed to his voting record and endorsement by the National Rifle Association, saying he was strongly for the Second Amendment.

Sirois also touched upon concerns he had with the curriculum in schools, including Critical Race Theory and topics of sexuality and gender, which he said were “brainwashing” children.

“Leave your personal life in your bedroom and teach curriculum,” Sirois said.

Charles Page of New Ipswich, who will not be on the primary ballot, but is running for the House as an independent and will be on the November ballot, also spoke, noting he was a “pretty conservative” candidate. Page said he was against vaccine mandates, and said he didn’t think the decision to get the COVID-19 vaccine should be forced on anyone.

When asked about the resurgence of diseases previously eradicated in the United States, such as polio, and their recent resurgence, Page said the polio vaccine had gone through a years-long vetting practice absent from the COVID-19 vaccine process, and called the push to vaccinate “fear-mongered.

On the Democratic side, there are three candidates in Hillsborough District 32: Michael DeLoria of Temple, Richard Swanson of Wilton and Kermit Williams of Wilton.

Williams, a former state representative for eight years, said his experience in the House was an asset. A former member of the Commerce Committee, Williams said he wants to get back to the same kinds of bills he used to endorse, with a focus on assisting small businesses. He pointed to previous bills he had worked on, such as allowing breweries and wineries that did not also have a restaurant to sell glasses of their product, and an attempt to adjust insurance payouts for auto body work, which he said was a barrier to small auto shops hiring workers.

Williams said on the big issues, an individual representative has little power to “change the world,” but he could help to make small changes that would matter very much to those impacted by them.

DeLoria said his decision to run for the seat was a direct result of Kelley’s vote to secede from the United States.

“I think first and foremost, we are all Americans,” he said.

DeLoria said he had experience with state assistance, having grown up in foster care and having experienced a four-month period of homelessness, despite a college education and a bachelor’s degree. He said for a period of about a year-and-a-half, he and his wife needed assistance such as food stamps to get by. While no longer on assistance himself, he said he understands that people sometimes need that step up, and that his policies would be “geared toward helping people climb out of those holes.”

“Any legislation I vote on is going to be based on whether it’s going to help people,” he said.

When asked about abuses of the welfare system, DeLoria said there are always abuses of any system, but he believed those to be a small fraction of those who used the system legitimately.

When asked about divisive concepts, DeLoria said he disagreed with “making people feel guilty about things they had no part of,” but said it was important to teach about the country’s history. On gun control, DeLoria said he was a gun owner himself, and believed n the right to bear arms, but said he would support certain control measures, including requirements for safety courses, mental health checks or magazine capacity restrictions.

Swanson spoke more broadly about his interest in social issues, including education, noting that good school systems were a draw for not only residents, but businesses.

“Education is at the top of the list,” Swanson said.

Swanson said teachers are in need of higher pay, and said he disagreed with “censoring” what they taught in the classroom, referring to the banning of “divisive concepts.”

“Teaching history is about critical thinking and it’s about tough concepts,” Swanson said.

Swanson said he was also concerned about rising energy costs, and the need for more clean energy solutions in the state. He also said that he believed the state could be doing more to provide health care options, and said he would work to protect abortion rights in the state.

Karen Testerman and Thaddeus P. Riley, two of the five candidates up against Gov. Chris Sununu in the upcoming Republican primary, also spoke.

Like their House counterparts on the Republican ballot, Testerman and Riley were also asked about their stance on abortion. Riley said he would be a pro-life governor, and “If a bill comes to my desk that’s a pro-life bill, I will sign it,” but that exceptions should be made when the life of the mother was endangered by the pregnancy.

He said he wanted to create a state where there were “incredible options” for pregnant people to access assistance.

Testerman said she was “strongly pro-life.” and that she was running to “put God back, not only in New Hampshire, but America, again,” and said God should be put back “into schools, into our homes and in our state.”

When asked about the concept of separation of church and state, Testerman said anyone has the right to practice whatever religion they believe, but said it should not mean a complete separation.

“There are godly principles upon which our country is founded,” Testerman said.

Riley said he would be a “conservative outsider,” whose “in this to fight for good” and will stand up to the “woke mob and the media.”

Also on the ballot for the Republican primary are Sununu, Julian M. Acciard, Jay Lewis and Richard A. McMenamon II. State Sen. Tom Sherman is running unopposed in the Democratic primary.