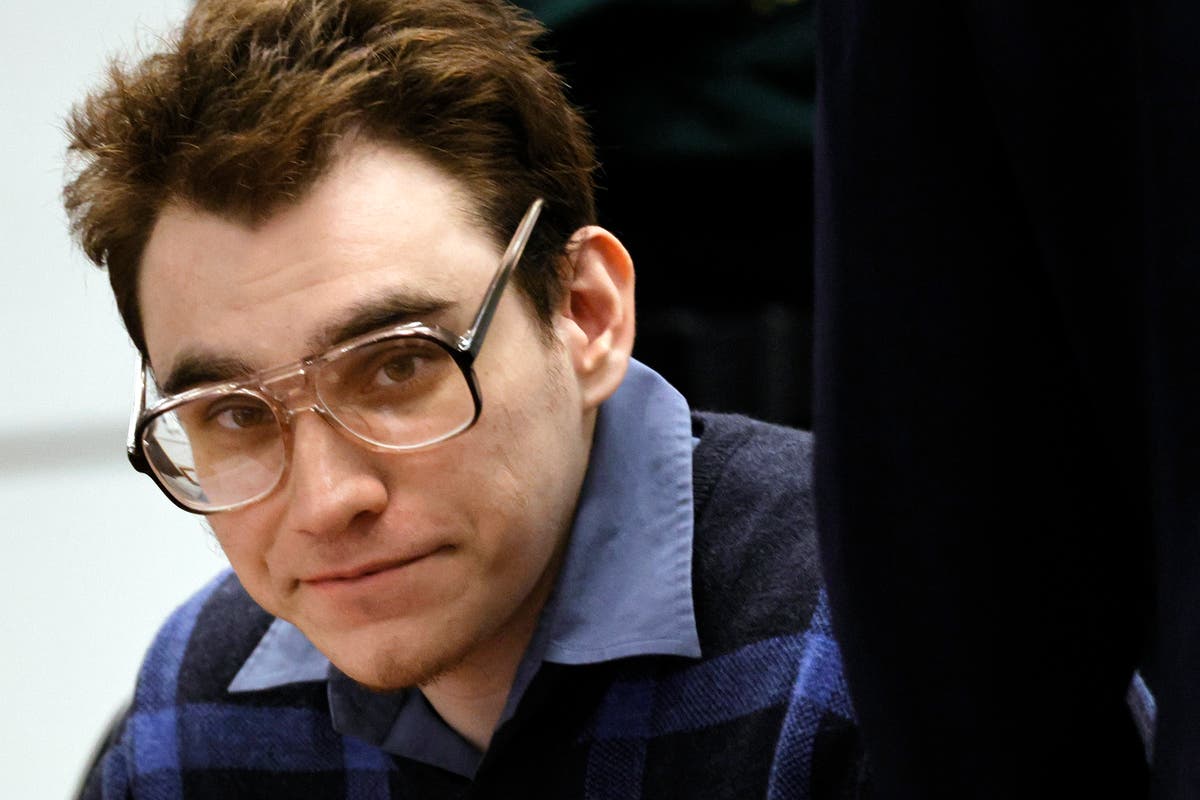 The sentencing trial of Nikolas Cruz, convicted of the 2018 massacre at Marjory Stoneman Douglas High School in Parkland, is under way in Florida court, with the defence presenting its case for a second week.

Cruz’s brother Zachary Cruz is expected to take the stand in the upcoming days after their sister Danielle Woodard was brought from jail to testify for his defence. Woodard said her brother was “polluted” in the womb by their biological mother who was an alcoholic and drug addict.

Jurors have also heard from teachers, neighbours and psychiatrists who treated Cruz as a child.

In October 2021, Cruz pleaded guilty to 17 counts of murder and 17 counts of attempted murder. Jurors will now decide if he is sentenced to death or to life in prison.

Parkland gunman Nikolas Cruz laughed about leaving a MAGA hat on the grave of his late adoptive mother, according to a jailhouse call made just months before the start of his sentencing trial.

In the video visit with Richard Moore, dated 8 March 2022, the 23-year-old mass murderer made light of his bizarre tribute to Lynda Cruz after her death.

Cruz told Mr Moore that he misses Lynda “and laughs at the fact that he left his Donald Trump ‘MAGA’ hat on her grave”, according to a summary of their conversation.

He also said that he believed his sentencing trial would take “an emotional toll” on him.

In a separate video call one month later on 13 April, Cruz then asked his former neighbour Patricia Westerlind to go to Lynda’s grave and remove the hat “since he knew his mother would [sic] like in [sic] there”.

The Independent’s Rachel Sharp has the full story:

In another video visit, the Parkland gunman urged his brother to visit their mother’s grave on Valentine’s Day – the anniversary of his murderous rampage

Nikolas Cruz once went on a “killing spree” of all the toads in the neighbourhood after his family dog died, according to courtroom testimony from his former neighbour.

Paul Gold, who lived next door to the Cruz family from 2008 to 2011, testified on Wednesday that he recalled a time when one of the Cruz family’s dogs died because it had eaten a toad.

“He tried to kill every toad in the neighbourhood,” he said.

The Independent’s Rachel Sharp has the full story:

The court session has ended for the day.

Jurors will return at 9am on Thursday for the sentencing trial to resume.

Deputy describes handcuffing Cruz at his home in 2012

Deputy Jerry Michalosky, with the Broward County Sheriff’s Office, testified that he was called out to the Cruz home multiple times while Cruz was in middle school.

In one incident in 2012, he said Lynda Cruz had called police because Cruz “grew angry and threw things” in the home.

When he arrived at the home, he said he learned that Lynda had barred her son from playing on his Xbox as punishment for not going to school that day.

Cruz had thrown things and tried to lock himself in his bedroom, he said.

The deputy said he saw a dog bowl and vase broken in the home from the incident.

He managed to get Cruz out of his room and handcuffed him, putting him in the back of his patrol car, he said.

Cruz complied with his orders and showed no emotion, he said.

Sgt James Snell, with the Broward County Sheriff’s Office, testified about responding to a call at the Cruz family home in September 2011.

The officer said that the call was made by Cruz’s mother Lynda Cruz, who requested that only one unit be dispatched to the home.

The call was about Cruz’s brother Zachary “throwing items”, he said.

Jailhouse phone calls played in court have revealed how Nikolas Cruz and his neighbour discussed making a movie about the mass murderer’s life.

The dramatic audio, from two separate calls made in August 2021, reveals Cruz’s former neighbour Paul Gold telling the Parkland shooter that he knows a “famous producer” who has worked on movies with stars including Brad Pitt and Tom Hanks.

Mr Gold then goes on to say that he is “amazed” that no one has approached Cruz to create a movie about his life.

“You know talking about movies, I’m amazed somebody hasn’t approached you about making a movie,” he is heard saying.

Mr Gold brings the idea up again in another call. Cruz responds by saying that he is uneasy with he suggestion.

Under cross-examination, prosecutors tried to point out discrepancies between Mr Gold’s testimony in court on Wednesday and testimony he gave in a deposition in January of this year.

Mr Gold and his fiancee Rocxanne Deschamps lived next door to the Cruz family until 2011.

The couple were going through a far from amicable split when Lynda died in November 2017. Cruz and Zachary initially moved in with Ms Deschamps but Cruz had to leave after  a violent incident in the home around a month later.

Mr Gold was asked if he was going to hire an attorney to help Cruz “go after” Ms Deschamps after he left the home.

Mr Gold said that he had “no intentions” of doing that.

The prosecutor said that Mr Gold had said in his previous deposition that he was planning to help Cruz pursue a lawsuit.

Former neighbour Paul Gold testified that the Cruz family appeared to be “struggling” financially when he lived next door to them, with the fridge often bare of food and Lynda often complaining that she didn’t have enough money.

“[There was a ] lack of food in the house. The refrigerators were typically empty… we realised that they didn’t have money and were struggling,” he said.

At one point, he said he noticed that Lynda had resorted to “padlocking the refrigerator” to stop Cruz and Zachary raiding it.

Mr Gold said that Lynda “constantly” spoke of financial problems and he “felt bad for her and the kids” who he said were never taken out anywhere.

To try to help the family out, Mr Gold said that he and his then-fiance Rocxanne Deschamps would sometimes bring extra groceries to them.

However, Mr Gold testified under cross-examination that he believed Lynda “was a lot better off than she let on” – something which he said “infuriated” him.

Neighbour reveals phone call with Cruz on day of shooting

Former neighbour Paul Gold testified that he called Nikolas Cruz when he learned about the Parkland shooting to warn him to stay safe – not realising that the 19-year-old was actually responsible for the massacre.

“When I heard about the shooting, I called Nik to warn him there was a shooter and to be careful,” he said.

“I couldn’t even imagine it was him.”

When he later found out Cruz had carried out the attack, he said he “started screaming”.

Mr Gold said he planned to never speak to Cruz again but, as time went on, he said he has accepted his calls.

Nikolas Cruz once went on a “killing spree” of all the toads in the neighbourhood, according to former neighbour Paul Gold.

Mr Gold said he recalled one of the Cruz family’s dogs dying because it had eaten a toad.

In response, Cruz “went on a killing spree”, he said.

“He tried to kill every toad in the neighbourhood.”