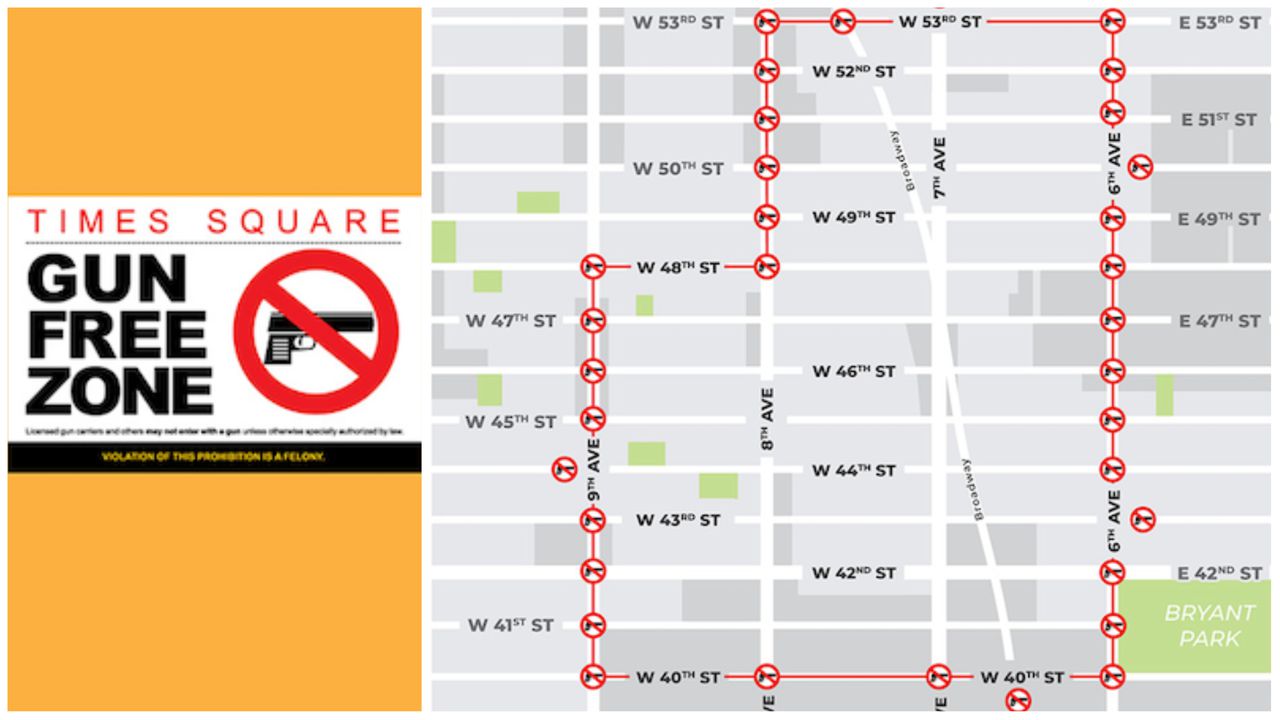 “The U.S. Supreme Court’s Bruen decision was the shot heard ‘round the world that took dead aim at the safety of all New Yorkers,” Mayor Eric Adams said Wednesday. “So while the Supreme Court decision may have opened an additional river feeding the sea of gun violence, we are doing everything we can to dam it and keep New York the safest big city in America.”

Legislation has meanwhile been passed in Albany to both counteract the high court’s ruling, and in response to the mass shooting earlier this year in Buffalo.

Background checks for concealed carry permits now require four character references; a list of former and current social media accounts for the last three years; disclosure of applicant’s spouse or domestic partner, or any other adults residing in the applicant’s home, including any adult children of the applicant; and an in-person interview with their licensing officer or designee.

Licensing offers may request any additional information they deem appropriate.

Additionally, recently passed state law states an individual must be at least 21 years old and have a permit prior to purchasing or taking possession of a semiautomatic rifle.

“In response to the Supreme Court’s decision to strike down New York’s century-old concealed carry law, we took swift and thoughtful action to keep New Yorkers safe,” Gov. Kathy Hochul said. “I refuse to surrender my right as governor to protect New Yorkers from gun violence or any other form of harm. In New York state, we will continue leading the way forward and implementing common sense gun safety legislation.”

City Council on Tuesday debated the rollout and enforcement of a citywide plan falling in line with the new state legislation, as well as which parts of Times Square will be off limits to the concealed carrying of guns, ABC7 reported.

“I feel it’s not advertised enough right now that in September, some people may have concealed weapons and get caught up in something that if they would’ve known in advance,” Councilwoman Darlene Mealy said.

The city announced Wednesday it will begin to post signage around Times Square informing those traveling through the area that it is a gun-free zone, and that licensed gun carriers may not enter with a firearm unless specially authorized by law. Signage is expected to be posted at other “sensitive locations” in the near future, the city said.

The city also announced that it will launch a website Thursday with frequently asked questions to educate New Yorkers about the state law. The page will be updated periodically to respond to New Yorkers’ concerns and provide helpful information.

In July, moments after Supreme Court justices nullified concealed carry laws in New York that stretched back more than 100 years, lawmakers and governors in states with similar rules rushed to fortify restrictions.

“Anti-gun governors and their allies in the state legislatures stand in open defiance of the nation’s highest court,” a National Rifle Association spokesperson reportedly stated in July.

The spokesperson reportedly went on to say the group would “fight for law-abiding gun owners and ensure that their rights are restored as is called for under this landmark decision.”