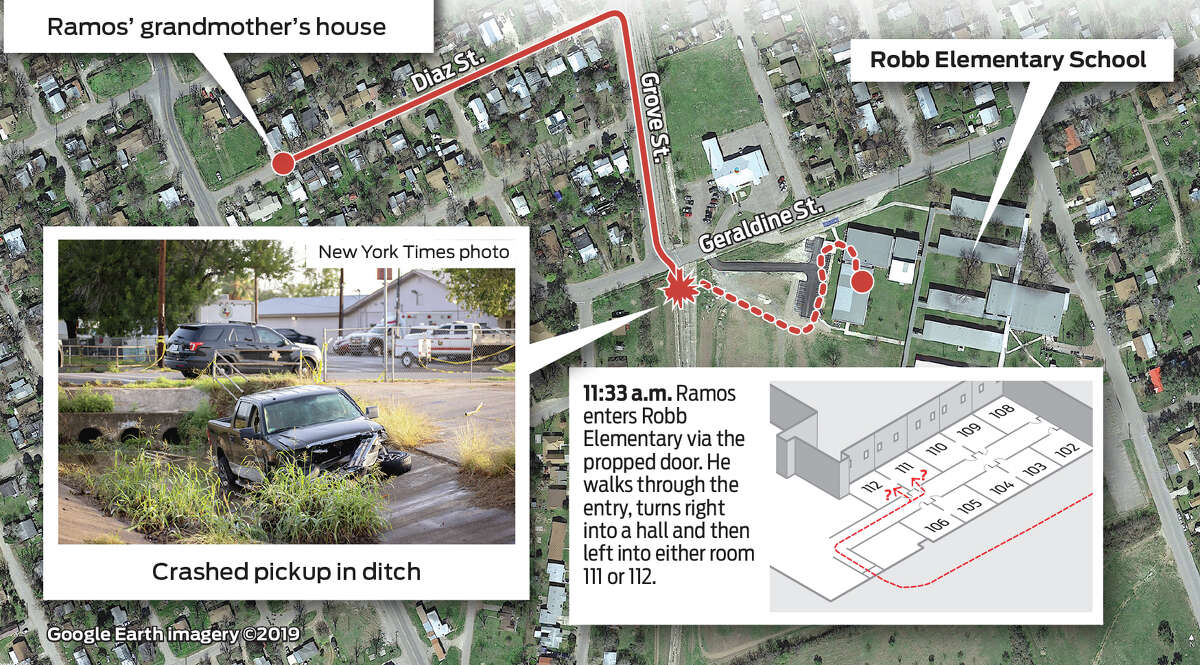 9:20 p.m. Lt. Gov. Dan Patrick walked back comments he made during a Fox News interview Saturday morning. In a tweet Saturday night, he said he meant to say he thought police’s decision to not go into Robb Elementary sooner “may have” cost lives. Earlier, he said it did cost lives. “Talking back & forth with the host I didn’t realize it until later,” he wrote. “The investigation of that time period is still ongoing.”

5 p.m. Robb Elementary was jubilant Tuesday morning until Salvador Ramos,18, walked through the campus parking lot firing his assault rifle randomly. Soon, 19 children and two teachers would lie dead, and the nation would recoil in horror at the latest massacre of innocents in a school.

With this interactive timeline, see a minute-by-minute reconstruction of the morning chaos and how the tragic school shooting in Uvalde unfolded.

4:57 p.m. As many NRA attendees started filing for the exits, a diminished but dedicated group of protesters continued chants against gun culture, and the members headed across the street. Houston Police stayed in force, allowing all the noise but keeping a close guard on separating the groups.

1:57 p.m. Alex Mounir walked across a graduation stage at the Toyota Center, and right across the street to protest outside the NRA annual convention.

“How could I not.” Mounir said, holding a sign someone gave to him. “Of course I would be out here,  sick of being under a desk.”

Mounir said he is for protecting the Second Amendment and schools by arming guards but also making sure guns aren’t a constant of American life.

Mostly he’s sick, he said, of living in a world where it’s necessary as a student to practice shooter drills.

“People don’t understand what it is like,” Mounir said. “Youre cowering under a desk and they don’t tell you if it’s real.”

His days at Ridge Point High School in Missouri City might be over, but other students shouldn’t have to endure the stress, he said.

What’s less clear, at least for now, is how to bridge the gap between the decidedly different perspectives on display in downtown Houston.

Mounir said he didn’t have all the answers.

1:20 p.m. About 20 black and yellow clad Proud Boys are being kept divided from the 200 or so protesters outside the George R. Brown Convention Center.

After Houston Police created a hard line between them, the small gathering is talking amongst themselves.

12:45 p.m. The CISD school police chief who has been criticized for delaying the police response at Robb Elementary School was “overwhelmingly” elected to a city council position in Uvalde earlier this month, according to a report from the Uvalde Leader News.

Pete Arredondo — who was identified by Texas DPS Director Steven McCraw Friday as the commander on scene for the mass shooting — received almost 70 percent of the vote on May 7 for District 3’s seat, elections records show.

Arredondo is set to be sworn into his new position on May 31 — exactly a week after the massacre.

11:20 a.m. It’s not as common as one might think, but the question comes up at the Kalashnikov USA booth.

“They’ll says, “Are y’all a Russian company,’” said Dave Garretson, manning the booth. “It’s not often, but it happens..”

After the spectacle of Friday’s politics-driven day, attendees were settling in more to browsing and grabbing free bags and ballcaps.

Even the Kalashnikov booth, Russian name and origins and all, was bustling.

“They know the AK-47, but not Kalashnikov,” Garretson said.

The Florida company, an importer prior to 2008, started manufacturing after the Russian company was kept out of the market. With Ukraine and Russia’s aggression on many people’s minds, and guns front and center, it certainly has not dented their demand on the convention floor.

10:55 a.m. A Houston progressive group member confronted Ted Cruz at a restaurant about the Uvalde shooter’s age and gun access before being escorted out by the senator’s security.

“So, if you look at the laws the Democrats are passing they wouldn’t stop a mass murderer,” Cruz responded.

“This shooter waited till the day he turned 18, why is it so hard to support stronger gun laws in this country?” Hernandez said. “You need to make it harder to get guns in this country.”

“My bill would have stopped the violence,” Cruz can be heard saying as Hernandez was escorted out of the restaurant.

8:36 a.m. A growing number of state lawmakers are urging Gov. Greg Abbott to call them back to Austin for a special legislative session after the mass shooting in Uvalde.

The calls have mostly come from Democrats, who have made similar pleas after past tragedies. The entire Senate Democratic Caucus is expected to send Abbott a letter on Saturday pushing for a special session to address gun violence and implement new gun restrictions.

#Governor call a Special Session now to (1) repeal #HB1927 permitless carry, raise the age from 18 to 21 to purchase guns and (2) investigate what happened in #UvaldeschoolMassacre. st

But the GOP controls both chambers of the Legislature, and now some of them have also asked to come back to Austin. State Sen. Kel Seliger and Rep. Lyle Larson, both moderate Republicans who are not seeking re-election, demanded on Friday that lawmakers “do something.”

By the end of the day, a handful of other Republicans, including state Reps. Steve Allison of San Antonio and Jeff Leach of Plano, joined their calls.

“Texas Lawmakers have work to do,” Leach tweeted. “Conversations to engage in. Deliberations & debates to have. Important decisions to make. And the best way to do our jobs openly, publicly & transparently is in a #txlege special session. Texans expect & deserve this & the time demands it.”

Texas Lawmakers have work to do.
Conversations to engage in.
Deliberations & debates to have.
Important decisions to make.

And the best way to do our jobs openly, publicly & transparently is in a #txlege special session.

Texans expect & deserve this & the time demands it.

At a Friday press conference, Abbott said “all options are on the table.” He made similar remarks after a pair of mass shootings in 2019, but nothing materialized.