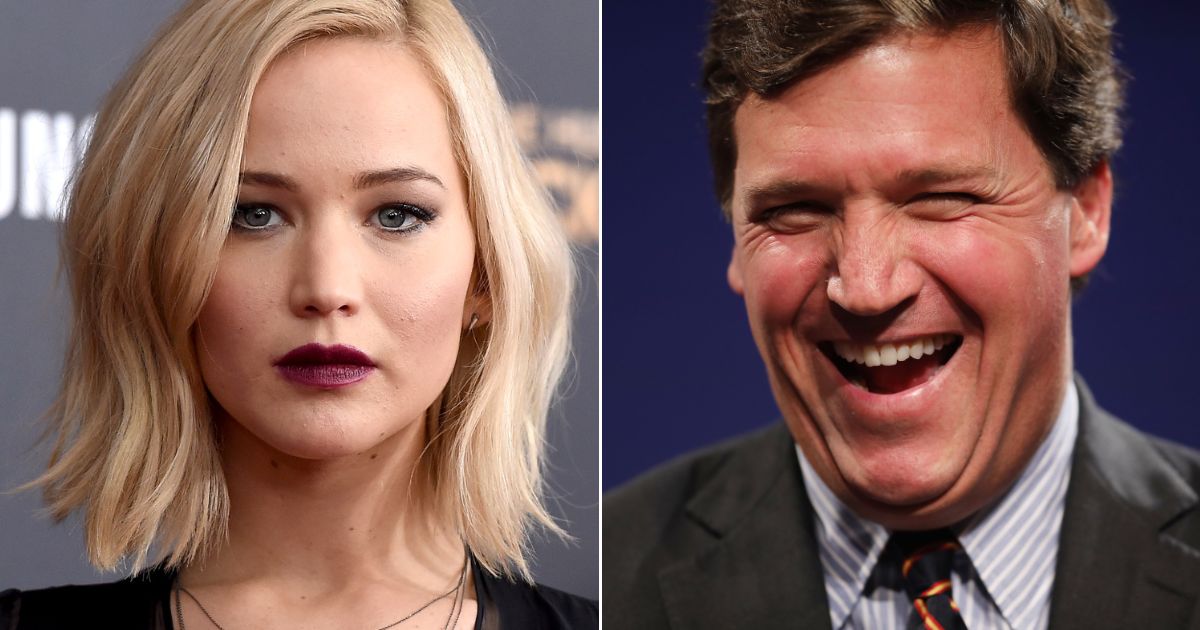 Actress Jennifer Lawrence was, at one point in her life, close to Hollywood mogul and serial sex offender Harvey Weinstein.

I just want you all to know that as we go forward. Keep it in mind. Tuck away these images among the facts you’re about to hear regarding the “X-Men” and “Silver Linings Playbook” actress because I think it’s important:

Jennifer Lawrence wants you to be politically engaged like Harvey Weinstein. pic.twitter.com/DX4RPyzRM2

On Tuesday, Vogue published an interview with Lawrence, who said she’s having nightmares about one specific person. No, it wasn’t Weinstein. Nor was it her frequent collaborator, director David O. Russell, who’s infamous for his verbal abuse on-set and was accused, in 2011, of sexually assaulting a transgender male family member.

No, she doesn’t have nightmares about the Tinseltown monsters she’s been in close contact with. Instead, her night terrors revolve around a figure I’m assuming, judging from her political beliefs, she’s spent zero time in the physical presence of: Tucker Carlson.

In a tone-deaf dialogue with writer Abby Aguirre that needs to be read to be believed — and may not be adequately believed even then — Lawrence described telling her therapist about her bad dreams surrounding the Fox News star, loathing her family’s conservative values and saying she can’t be bothered with people who don’t do politics these days, since “politics are killing people.”

Is Hollywood too liberal?

The relevant portion of Aguirre’s piece reads like a parody of Hollywood puff-piece journalism as written by someone at the Babylon Bee with too much time on their hands.

“In late June, I drove to Lawrence’s house in Beverly Hills. She greeted me at the door in a knee-length gray robe and fluffy white slippers,” Aguirre wrote. “Lawrence led me through a sunken den to a large outdoor dining area that was screened in, Southern-style. As she uncorked a bottle of white wine, she warned me that she was in a mood. Not a bad mood, exactly. But a consistently emotional one, brought on by the Supreme Court decision overturning Roe v. Wade a few days earlier.”

Apparently, the high court ruling that the Constitution doesn’t explicitly grant one the right to kill one’s unborn child had indeed put Lawrence in quite the “mood.” Ironic, given the fact Aguirre wrote, in the section just prior, that the actress described motherhood as being “the best thing ever, and yet totally terrifying.”

“Much of her disappointment was directed at certain relatives back in Louisville, Kentucky, where she’d grown up, including her father. The 2016 election had torn open a rift in her family. Repairing it was an ongoing process. Particularly since having a baby, she had been trying to heal,” Aguirre wrote.

“She even discussed with her therapist the recurring nightmares she has about Tucker Carlson. ‘I just worked so hard in the last five years to forgive my dad and my family and try to understand: It’s different. The information they are getting is different. Their life is different,’” Aguirre wrote, quoting Lawrence.

Far be it from me to mock someone about seeking professional help about issues that are troubling them. Heck, I’ve sought professional help myself. However, I share that fact solely to emphasize that, as someone who plops himself down in front of a computer most days and focuses on consuming and writing about the cesspool of American politics, I’ve never had a nightmare about Rachel Maddow or Chris Hayes. If I had them, I wouldn’t consider them important enough to talk to my therapist about them — and I certainly wouldn’t be telling an interviewer about them if I were famous as a way to strike out at liberals, including the ones in my own family.

“Lawrence had a haunted look in her eyes. She would stop at times to apologize or make a self-deprecating joke, then get visibly overtaken by emotion again. I felt like I was watching a real-life version of whatever it is that happens when she acts,” Aguirre wrote.

Except Lawrence has never delivered filmic dialogue as silly as the line she summoned next on that June day: “I’ve tried to get over it and I really can’t. I can’t. I’m sorry I’m just unleashing, but I can’t f*** with people who aren’t political anymore. You live in the United States of America. You have to be political. It’s too dire. Politics are killing people.”

Hey, @TuckerCarlson, Jennifer Lawrence has been dreaming about you again https://t.co/DUqpsZFx1a

This would give me nightmares if I were her, not Tucker Carlson. 😳😳😳 pic.twitter.com/9fcEhq8yFa

The rest of the political portion of the interview is delightful reading, too, provided you have a healthy sense of schadenfreude and love watching a good ol’ snowflake meltdown.

Here’s her take on abortion and her family’s values, which she derides as inequitable:

The reversal of Roe was reigniting all of it. She had not been entirely in Hillary Clinton’s corner, but still found it incredibly upsetting that the country elected Donald Trump. “It breaks my heart because America had the choice between a woman and a dangerous, dangerous jar of mayonnaise. And they were like, Well, we can’t have a woman. Let’s go with the jar of mayonnaise.” And now, thanks to Supreme Court justices appointed by that dangerous jar of mayonnaise, the unthinkable had happened. “I don’t want to disparage my family, but I know that a lot of people are in a similar position with their families. How could you raise a daughter from birth and believe that she doesn’t deserve equality? How?”

Apparently, if you don’t get to kill your unborn baby, you don’t share equality with the rest of us who also don’t have a constitutional right to kill our baby. How do you raise a kid that way? I mean, provided you don’t kill it in the womb:

“If you don’t endorse your daughter to murder her child you’re a bad parent” thank you Hollywood very cool https://t.co/O7sT8r7hNs

Then there’s this gem about how Lawrence started developing lefty sensibilities: “Later, when she made movies in other countries, she saw how money always tended to concentrate at the top, not just in the United States, how it rarely trickled down to working people.” Um, Jennifer, you are the top.

And then there’s this doozy regarding gun control: “I’m raising a little boy who is going to go to school one day. Guns are the number-one cause of death for children in the United States. And people are still voting for politicians who receive money from the NRA. It blows my mind. I mean if Sandy Hook didn’t change anything? We as a nation just went, OK! We are allowing our children to lay down their lives for our right to a Second Amendment that was written over 200 years ago.”

Of course, this “mood,” lest we forget, was brought about because mothers can no longer force their unborn children to lay down their lives because of a Supreme Court decision handed down over 49 years ago based on an erroneous reading of several constitutional amendments, which are all at least 150 years old, if not more.

Then again, don’t expect profound logic for a Hollywood multi-millionaire who thought she’d cut a politically sympathetic figure by announcing she’d been having nightmares about Tucker Carlson. Not Harvey Weinstein, not David O. Russell. That guy who hosts the show that airs for one hour each night on Fox News, one she can easily avoid — that’s the one she wakes up screaming about. How can anyone take this woman seriously?

C. Douglas Golden is a writer who splits his time between the United States and Southeast Asia. Specializing in political commentary and world affairs, he’s written for Conservative Tribune and The Western Journal since 2014.

C. Douglas Golden is a writer who splits his time between the United States and Southeast Asia. Specializing in political commentary and world affairs, he’s written for Conservative Tribune and The Western Journal since 2014. Aside from politics, he enjoys spending time with his wife, literature (especially British comic novels and modern Japanese lit), indie rock, coffee, Formula One and football (of both American and world varieties).