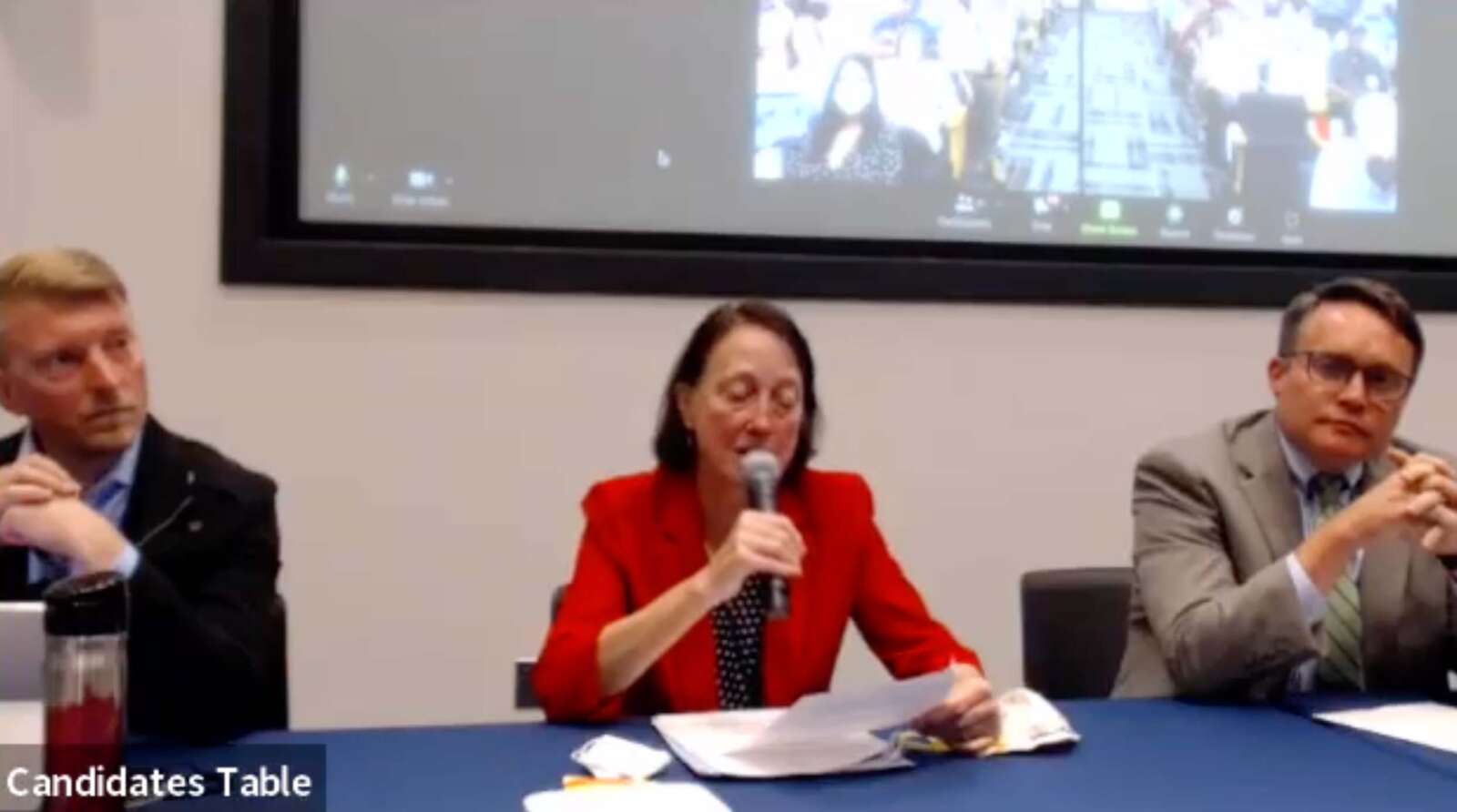 For voters, evaluating Arlington County Board candidate views of Missing Middle will look a lot like Goldilocks sampling porridge.

Three familiar names are vying for a seat on the County Board: incumbent Matt de Ferranti and his independent challengers Audrey Clement and Adam Theo, who have both ran for a seat on the Board before — Clement numerous times before.

Now, potential Missing Middle zoning changes are becoming a key battleground for the candidates, as both community support and opposition intensifies. The two-year study is entering a final phase of community discussion before it is slated to go to the Planning Commission and County Board for consideration as early as this year.

During Tuesday night’s questioning at the Hazel Auditorium in Virginia Hospital Center, Theo said he is “a huge fan” of Missing Middle because “it’s about not squeezing the middle class anymore, of allowing opportunities, options and housing types.”

Clement reiterated her equally entrenched opposition to it as “a scheme to rezone Arlington’s residential neighborhoods for much higher density multi-family dwellings,” which will keep housing types out of reach for anyone not making six figures.

De Ferranti, meanwhile, says he supports the construction of low-density units up to a point.

None, however, pronounced the county’s community engagement efforts as “just right.”

The Goldilocks principle reappeared when candidates discussed whether to do away with first-past-the-post voting for their seats and replace it with ranked-choice voting (RCV) for County Board elections.

Under this system, which has support from some current Board members and which the county has tested out, voters rank candidates by preference and a winner is selected over the course of many elimination rounds.

“Ranked-choice voting has potential, and I want it now in Arlington County,” he said.

Both independents support the change for general elections, while de Ferranti said he is supportive of it for primaries and more cautious about using it for the general election.

“It’s something I’m supportive of,” de Ferranti said. “There are fair critiques with respect to the simplicity and timeliness — as we just saw in Alaska — of the results.”

The County Board may consider ranked-choice voting before January, de Ferranti said.

While expressing support for ranked-choice voting, Clement claimed it would not work in Arlington because of media bias.

“Unfortunately, ranked-choice voting only works in competitive elections, where the media are unbiased and endorse candidates on their merits. That is not how media operate in Arlington,” Clement said. “A continual stream of press releases by and features about those who promote the status quo are published as news, together with biased editorials, all but guaranteeing the defeat of their challengers.”

(ARLnow no longer publishes opinion columns and has never endorsed candidates for office, though the Sun Gazette routinely publishes editorials and letters to the editor.)

Like their County Board counterparts, School Board candidates Bethany Sutton and Vell Rives said they would work to improve community engagement.

“A change I might make is to make sure we have multiple ways for people to engage and we are deliberately transparent as to how all that engagement has factored into the board’s decision making,” said Sutton, who received the endorsement of the Arlington County Democratic Committee after another candidate, Brandon Clark, withdrew from the caucus and then the election entirely.

Rives, meanwhile, said the School Board needs to vote on all “massive decisions,” such as extended school closures or starting a new school.

The School Board removed school-based police officers last summer, citing racial disparities in juvenile arrests in Arlington. Following the decision, the Arlington County Police Department said it would be a challenge to staff the program again.

The two School Board candidates both support the construction of a new Arlington Career Center, but criticized how the project was discussed and the strain it could put on future budgets.

In the congressional race, Rep. Don Beyer (D), who has represented Virginia’s 8th District since 2014 and easily won the Democratic primary this summer, faces two challengers: Karina Lipsman (R) and Teddy Fikre (I).

All stated their positions on federal issues ranging from abortion — given the U.S. Supreme Court decision to overturn Roe v. Wade — to gun control.

Lipsman said she is personally anti-abortion but would “be more than happy to hear from the people in this district” their views on abortion, and promised to represent them if elected.

“I support everyone’s choice — whatever that may be — however, I think in the instances of life-saving treatments for the mother, we should be considering other options, same with rape and incest,” she said.

Fikre, a pro-choice independent, argued that abortions “could go down by derivatives” if women had more resources to raise their children.

Beyer said he wants abortion rights enshrined in the Constitution. For now, he said, the Senate needs to pass the codification of Roe v. Wade.

Fikre and Lipsman both said they support “sensible gun control” measures such as red flag laws, which went into effect in Virginia nearly two years ago. They added that the root cause is mental health, a claim disputed by some health experts.

The forum turned a bit chaotic amid the gun control discussion. When delegates were given a chance to ask questions, a man walked up, introduced himself as a member of the National Rifle Association, and began asking a question. He was cut off, since only Civic Federation delegates could ask questions, but not before challenging the moderator.

“I’m a member of the United States and a Virginia voter,” he replied, with attendees laughing in response.

Earlier in the forum, a woman was asked to leave because she refused to put a mask on, in accordance with hospital policy.

Masks were required for attendees, save for those who were speaking. A woman objected to the requirement on the grounds that “Representative Beyer isn’t wearing a mask.” Masks were subsequently doled out and the meeting resumed, although some attendees remained maskless.