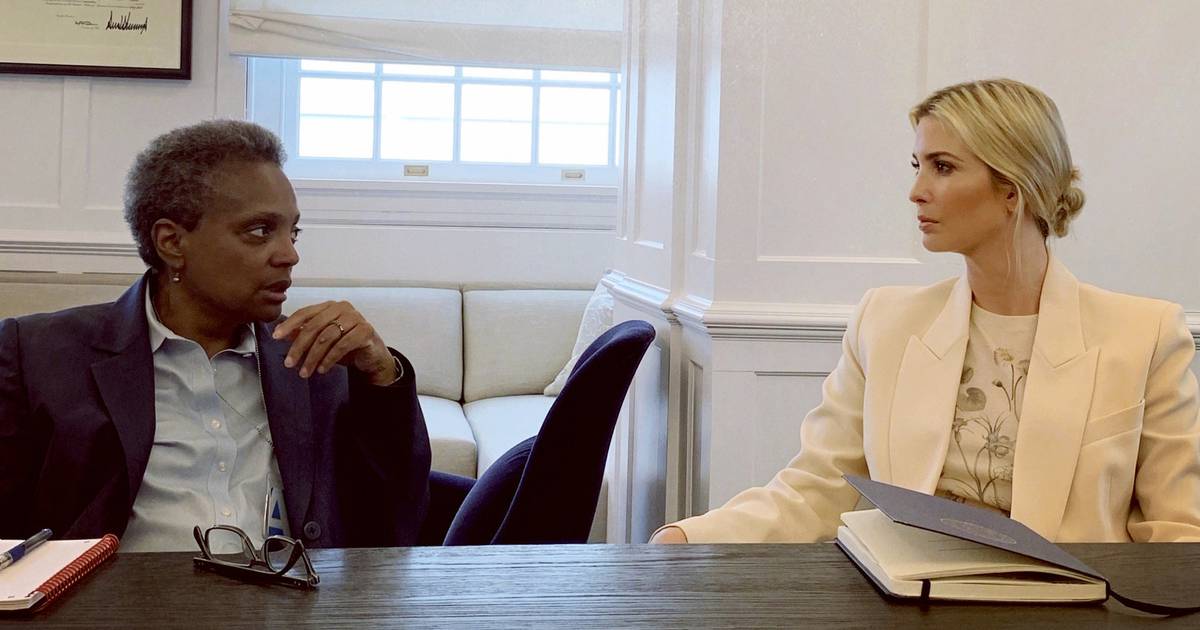 Good afternoon. Glad to be back after a road trip to Nebraska. Because most of the drive is through Iowa, I was sure I’d see plenty of evidence along Interstate 80 of the presidential candidates who are reportedly making more trips to the state than past primary seasons to woo first-in-the-nation voters in the party nomination process. Iowa’s storied caucuses are Feb. 3.

Not so much. I didn’t get a glimpse of the Trump sign I normally see heading west through central Iowa, and on the return trip, I only saw a Tulsi 2020 billboard — with a picture of Hawaii Rep. and Democratic hopeful Tulsi Gabbard — sprouting from farm fields near Iowa City. Digital age campaigning rules the day.

South Bend, Indiana, is at the center of the nation’s abortion debate as a controversial clinic supported by Democratic presidential hopeful South Bend Mayor Pete Buttigieg is allowed to open via court injunction, despite backlash — even from the state, which declined to give the operation a license.

As the nation mourns the victims of mass shootings in Dayton, Ohio, and El Paso, Texas, Ivanka Trump, the president’s daughter who also serves as one of his closest advisers, tweeted about Chicago’s violent weekend. In doing so, she was off on the locations and number of shooting victims, drawing the ire of Mayor Lori Lightfoot.

And Villa Park state Sen. Tom Cullerton is out as chairman of the Senate Labor Committee just days after being indicted for allegedly embezzling almost $275,000 in salary and benefits from the Teamsters union.

Welcome to The Spin.

State Sen. Tom Cullerton is out as chairman of the Senate Labor Committee, the Tribune’s Dan Petrella reports. Cullerton was indicted last week for allegedly embezzling almost $275,000 in salary and benefits from the Teamsters union.

“Cullerton, 49, is now chairman of the Veterans Affairs Committee. Because he remains a committee chairman, Cullerton will continue earning a $10,500 stipend on top of his legislative salary of nearly $69,500. Cullerton also remains a member of the Labor Committee.”

Ivanka Trump wrote on Twitter: “As we grieve over the evil mass shootings in El Paso and Dayton, let us not overlook that Chicago experienced its deadliest weekend of the year. With 7 dead and 52 wounded near a playground in the Windy City — and little national outrage or media coverage — we mustn’t become numb to the violence faced by inner city communities every day.” Read Gregory Pratt’s full story in the Tribune by clicking here.

Yes, Ivanka Trump’s comments followed a weekend mass shooting in El Paso, Texas, that left 22 dead and 26 wounded — the suspected gunman who is believed to have authored a manifesto with white supremacist commentary — and another just hours later in Dayton, Ohio, where nine people were killed and 27 injured; the shooter in that case was believed to hold far-left views. But they also come a day after Mayor Lightfoot blasted Ivanka’s father.

“What he’s been doing is blowing every racist, xenophobic dog whistle, and when you do that, when you blow that kind of dog whistle, animals come out,” Lightfoot said Monday, referring indirectly to President Trump’s incendiary tweets and campaign speeches that have included calling Mexican immigrants “rapists.” Trump should use “his weight in Congress to move forward on common sense gun reform,” Lightfoot said. You can read that story, also authored by Pratt, by clicking here.

Chummy factor: Don’t forget that Lightfoot met with Trump — Ivanka, not the president — during a May trip to Washington, D.C. Ivanka Trump even tweeted out a chummy photo she and Lightfoot took together.

“It wasn’t a playground, it was a park. It wasn’t seven dead. It wasn’t 52 wounded in one incident, which is what this suggests. It’s misleading,” Lightfoot said. “It’s important when we’re talking about people’s lives to actually get the facts correct, which one can easily do if you actually cared about getting it right.”

Lightfoot on the death of author, Nobel laureate Toni Morrison: “As a fellow Ohio native, I know of the excitement I felt when a new work of hers hit the bookshelves, and the untold hours I spent lost in the eloquent beauty and complex and vivid truths of her stories and characters, from Pecola, to Milkman, Denver, and countless others,” Lightfoot said in a news release issued earlier today. “Like many of her characters, Toni’s own story is one of perseverance, self-discovery, and ultimately triumph. Though her career saw her reach the pinnacle of professional success and public adulation, Toni never lost sight of who she was or her mission to speak to an essential part of the American story.”

With reproductive rights increasingly under fire across the country, an abortion clinic in South Bend, Indiana — a 90-minute drive from Chicago — opened in June under a shroud of controversy and is operating in legal limbo, the Tribune’s Angie Leventis writes.

“A federal judge in May granted a preliminary injunction allowing Whole Woman’s Health of South Bend to perform medication abortions even as the clinic remains unlicensed by the Indiana State Department of Health, pending the outcome of a lawsuit filed by the clinic’s owner,” Leventis writes, adding: “The state has appealed the temporary opening to the 7th U.S. Circuit Court of Appeals in Chicago.”

In 2018, Buttigieg — whose presidential campaign has spotlighted his pro-reproductive rights platform — ignited a local firestorm when he vetoed a zoning request by an anti-abortion pregnancy center whose operators wanted to open up shop next door to the abortion clinic. Buttigieg “argued that the neighborhood wouldn’t benefit from adjacent organizations with ‘deep and opposite commitments on the most divisive social issue of our time.’” Read the full story here.

Expect U.S. Sen. Tammy Duckworth, who’s scheduled to be in Chicago tomorrow, to talk about themes of American strength when she addresses the nearly sold-out downtown City Club of Chicago luncheon. The junior senator from Illinois, a Hoffman Estates Democrat who is an Iraq War veteran, won’t be just talking about strength in military terms, either, her staff says. While a federal infrastructure bill hasn’t been passed, states like Illinois approved their own roads and bridges spending plan.

And as lawmakers debate and wrestle with gun control efforts vs. Second Amendment rights, Duckworth likely will touch on the gun violence in Chicago as well as the mass shootings in Ohio and Texas.

Illinois State Fair politics: U.S. House Republican Whip Steve Scalise is scheduled to be the keynote speaker at a “Republican Day” event while Nancy Pelosi is lined up to be the guest speaker at Democrats’ event: The Louisiana congressman will speak at the Aug. 15 “Republican Day Rally” at the fairgrounds in Springfield, the state GOP announced. A Trump ally, Scalise has worked “to build conservative coalitions and accomplish the Make America Great Again agenda,” according to a news release from the Illinois Republican Party. For more on the event, click here.

Scalise was in the spotlight two years ago when a gunman opened fire on Republicans during practice for the annual congressional baseball game, which raises money for charity. While lauding his comeback story, the news release also notes he “holds an A+ rating from the National Rifle Association, and strongly advocates for protecting the Second Amendment rights of law-abiding citizens.”

Republicans and Democrats get their own special days at the fair, where long speeches and food on a stick rule.

Democrats and newly elected Gov. J.B. Pritzker get their day — known as Governor’s Day, so-named for the party in the Governor’s Mansion — will celebrate Aug. 14. The Illinois Democratic County Chairs’ Association announced last month that U.S. House Speaker Nancy Pelosi of California will be a special guest at its annual brunch. For more on the event, click here.

The country’s former first lady and Chicago native is wearing traditional Korean dress in the mural splashed across a brick building that houses a Korean restaurant in the trendy Fulton River District, Javonte Anderson reports. Read his story in the Tribune here.

That’s some “give me a landmark so I know where I’m going” good marketing.

Anderson reminds us that this isn’t the only Michelle Obama mural in Chicago: “The former first lady was portrayed as an Egyptian queen in another Chicago mural in the South Shore neighborhood on the southeast corner of 74th Street and Chappel Avenue.”

Thanks for reading The Spin, the Tribune’s politics newsletter. Click here to have it delivered to your inbox weekday afternoons. Have a tip? Email host Lisa Donovan at ldonovan@chicagotribune.com.