Who Is the Real Deb Adams?
The Deb Adams Chronicles Part 3

by George Gramlich,
Commentary
Deb Adams, an “unaffiliated” ex-Californian, who moved here fairly recently, is running for Custer County Commissioner against Incumbent, retired Air Force Colonel, Bill Canda, who is a Custer County native. Adams’ campaign so far is a call for “unity”, love and peace for all. However, her past posts on social media and behavior while involved in various local organizations seem to pose a different picture of a candidate whose values are the opposite of most of Custer County’s citizens. She also made huge attempts at hiding her past, but luckily, failed. We will be exploring her “values and morals” over the next two months. It is an eye opener. Below are some more tid-bits of liberal wisdom from Adams:
Exhibit E: This is one of my favorites. Ol’ Deb is posing as some unbiased, neutral, “unaffiliated”, kumbaya, let’s all get along candidate but her postings on social media, her lack of ANY substance AT ALL in her political mailings (she is literally hiding her true platform), and the LEFTY local people she hangs out with paint a distinctly different picture. The post below by Adams really says it all:

Ok, let’s go “Forward” as Adams wants us to do and review some of the beautiful democrat positions that libs, like Adams, adore: abortion up to the moment of birth (and even after!), MORE taxes, more welfare, higher gas prices, gun control including confiscation, open borders, no bail policies (which are destroying our state), males can go into female bathrooms and locker rooms in our schools, legalize retail pot in our county, big government, drag queens teaching our kids, make Custer County an illegal immigrant sanctuary county, and on and on. You want that here in Custer County?
Exhibit F: Seems Adams is no friend of our 2nd Amendment and especially the National Rifle Association (NRA). The social media post below depicts a bunch of shot and killed children with Uncle Sam laying on top of the NRA man saying, “Everything’s okay…You’re safe…”. She is saying that the dead children are the fault of the NRA and legal gun owners. It’s the same old lib play book with using “the children” to attack their enemies, here being gun owners. Maybe in California or Boulder this children bit works but not here in Custer County. This is a 2nd Amendment county, Adams, and it is going to stay that way. 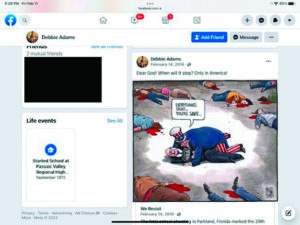 These posts on social media by Adams were taken down after she decided to run for county commissioner. She is trying to hide her true self from the voters. And she is touting “transparency” as one of her goals. Someone who intentionally hides her past from the public is not fit for public office. Your call this November folks. Vote to keep our way of life what it is.
More to come next week.