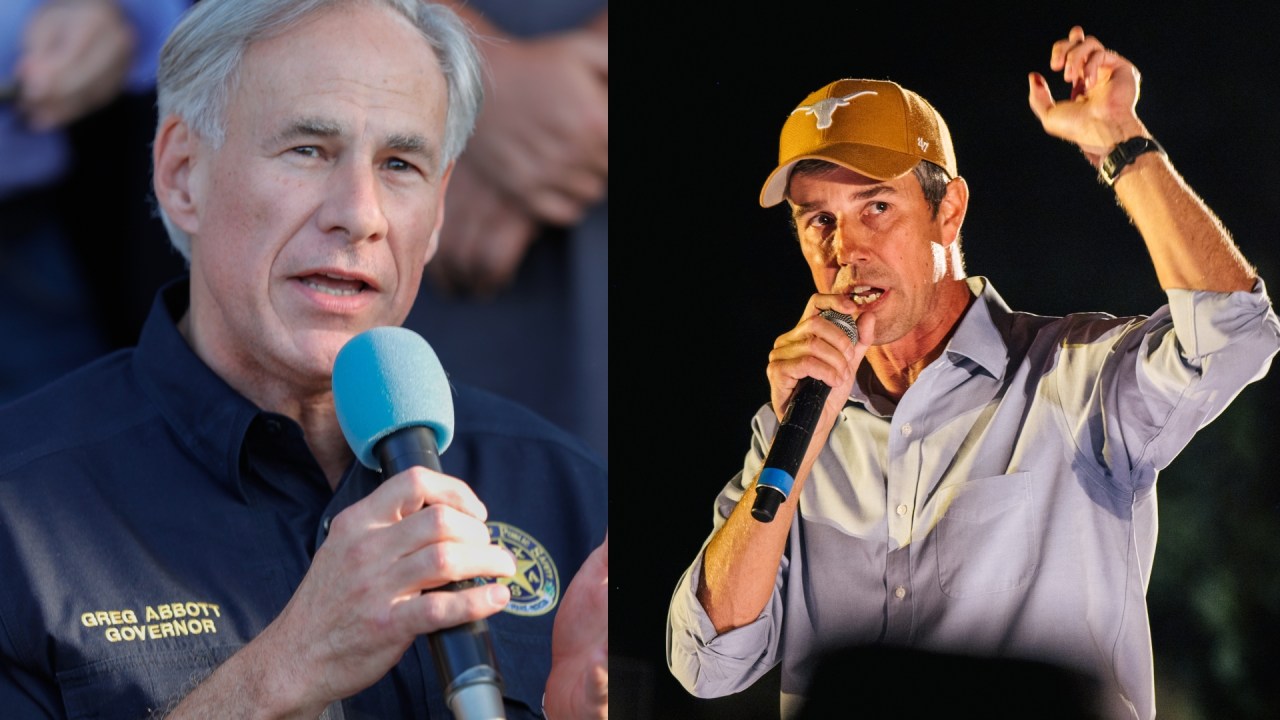 EDINBURG, Texas (NEXSTAR) — The countdown to the November election for Texas governor is on — and Texans have a major decision to make: re-elect Republican Gov. Greg Abbott or elect Democratic challenger Beto O’Rourke.


Which candidates are Texans searching for ahead of the Nexstar Governor’s Debate?

With just over a month before polls open, the pair will face-off for a debate on Friday at the University of Texas Rio Grande in Edinburg. Nexstar Media Group is hosting the debate.

Want to be part of the action? We’ll monitor Twitter questions through the hashtag #TXGovDebate. A live stream in this story will feature a pre-show starting at 6:45 p.m. with an analysis of what you should be paying attention to tonight during the debate. At 7 p.m. you’ll be able to watch the debate and text will be updated as it continues. Afterward at 8 p.m. watch a post-debate special with our experts and political analysts about how the candidates fared.

Last November, the Abbott campaign unveiled billboards across the state showing O’Rourke accompanied by the phrase “Wrong For Texas.” Meanwhile, O’Rourke tweeted over the weekend: “Greg Abbott doesn’t deserve to be rehired. We’re firing him on November 8.” On Friday night, you’ll get a better understanding of who you think is right for Texas before you decide with your vote in the upcoming election.

The two gubernatorial candidates have been exchanging barbs for a while — even before they became political rivals.

O’Rourke has been a fierce critic of Abbott’s, starting most notably after the Electric Reliability Council of Texas’ management of the grid during the February 2021 winter storm left millions without power in freezing temperatures. At least 246 people died due to storm-related conditions.

In November 2021, Abbott explained a roster of laws he signed will make the grid more effective. The governor said the Electric Reliability Council of Texas (ERCOT), which directs the vast majority of electricity in Texas, is working to be proactive rather than reactive. Additionally, Abbott said he met with natural pipeline transmitters who said they’re winterizing.

ERCOT and the Public Utility Commission said earlier this month that Texas’ power supply was in good shape going into fall. Abbott praised the two organizations on their implementation of his laws, saying Texas’ grid “is stronger than ever before.”


ERCOT says grid is in a ‘strong position’ heading into fall

Last December, O’Rourke called out Abbott over the disaster again, saying the governor is leaving taxpayers to foot the bill for fixing the state’s energy grid through higher electric bills.

“This is the ‘Abbott Tax’ — because Greg Abbott, the Governor of Texas, has failed to prepare our electricity grid and has failed to do anything meaningful after the failure of that grid to make sure we don’t have other problems going forward,” O’Rourke said.

Guns are a big focal point ahead of the election, especially since the May 24 Uvalde tragedy, when 21 people — including 19 children — were killed in a shooting at Robb Elementary School. It’s the third-deadliest school shooting in U.S. history.

Abbott, who has an A+ rating from the NRA, received criticism for Texas’ gun policies, which allows Texans ages 18 and up to carry a handgun in public without a permit or training under House Bill 1927. It’s what’s known as permitless carry. In June 2021, Abbott signed into law seven laws related to guns and said “Surely there’s no state in America that’s ever done as much protecting gun rights in their state.”


How do Texas gun laws compare to other states?

O’Rourke has condemned Abbott’s gun legislation. Video of an Abbott press conference in Uvalde went viral after O’Rourke approached the stage and yelled out, “You’re doing nothing.” On Wednesday, O’Rourke followed up this statement, tweeting: “The fact that Greg Abbott has chosen to take zero action to prevent another mass shooting in the 18 weeks since 19 children and two teachers were killed in Uvalde tells you everything you need to know about the guy. Keeping our kids safe demands that we vote him out.”

For his part, O’Rourke says under his governorship, permitless carry would be repealed, in addition to tightening purchase restrictions and enacting “red flag” laws for potential bad actors. While the former representative previously said he’d “take your [gun owners’] AR-15, your AK-47s,” he walked back these comments in February, saying he’s “not interested in taking anything anything from anyone” and intends to defend the Second Amendment while also making meaningful changes.

“It is clear that the gun control law that they are seeking in Uvalde, as much as they may want it, it has already been ruled to be unconstitutional,” Abbott said at a campaign event.

Seeing as the Friday debate is being held in the Rio Grande Valley — at a university less than 20 miles from the U.S.-Mexico border — the issue of border security and Texas’ policies on migrants is bound to arise.

In recent months, Abbott snagged national headlines for several actions he’s taken regarding migrants at the southern border. The governor began a controversial busing of asylum-seeking migrants out of state and to “sanctuary” cities like Chicago and New York City. Abbott touts Operation Lone Star’s busing as part of securing the border. It’s a practice that’s been praised by many conservatives — and replicated by Florida Gov. Ron DeSantis — but slammed by detractors, including O’Rourke.

But Abbott has laid the influx of migrants at the border on the shoulders of President Joe Biden and Vice President Kamala Harris, who’s served as lead of the U.S.’ approach on the root causes of migration.

The cost of the busing, which is viewed by critics as merely symbolic, has also been criticized. Records obtained by Nexstar and reported on Sept. 7 showed busing up to that point had cost the state $14 million, most of it funded by taxpayer dollars.

“Abbott is ineffective. His stunts are too,” O’Rourke tweeted Wednesday. “We will replace stunts with solutions, and Abbott with someone who will actually get the job done.”

Through his tenure as governor, Abbott has remained relatively popular among conservatives — including former President Donald Trump — and increasingly unpopular among politicians and voters of other affiliations. An August 2022 poll by the University of Texas and the Texas Politics Project laid out Abbott’s approval ratings ahead of the election (based on February data), finding the majority of Texans who identify as “strong Republican” (41%) approved somewhat of Abbott’s performance. Forty percent of the strong Republicans said they approved strongly.

Abbott and his wife Cecilia have one daughter, named Audrey.

O’Rourke, born Robert Francis O’Rourke in El Paso, previously served as a city council representative and a U.S. Rep. for Texas 16th district from 2013 to 2019. O’Rourke made national headlines with his 2018 U.S. Senate challenge to Ted Cruz, which he narrowly lost. The totals — a 2.6% margin — were notable since no Democrat had won a major race in Texas since 1994. Meanwhile, the race turned out to be the closest in Texas since 1978.

The Texan again made national headlines in 2019 with the announcement of his run for U.S. President. Though his campaign, launched in March, generated significant buzz — including a Vanity Fair cover story — O’Rourke ultimately withdrew from the campaign in November. Following his campaign, the former representative endorsed Joe Biden for president and founded Powered by People, his political action committee.

O’Rourke and his wife Amy have three children, Ulysses, Molly and Henry.

What the polls say so far

A different poll released earlier this month from the University of Houston and Texas Southern University showed Gov. Abbott in the lead with 49% over O’Rourke’s 42% among likely voters. Seven percent of those polled said they were still undecided. Among “almost certain” voters, it’s 53% for Abbott and 41% for O’Rourke.

The breakdown between the two is more mixed when factoring in race/ethnicity, age and gender.

Deadlocked: Both Abbott and O’Rourke polled at 45% for women voters

An August poll by Dallas Morning News and the University of Texas at Tyler also found Abbott leading O’Rourke by 7 points, 46% to 39% respectively.

On average, Abbott leads O’Rourke by eight points considering many recent polls, according to RealClearPolitics. If he’s re-elected, Abbott will become the fifth Texas governor to serve three terms.

Election Day in Texas is Nov. 8.