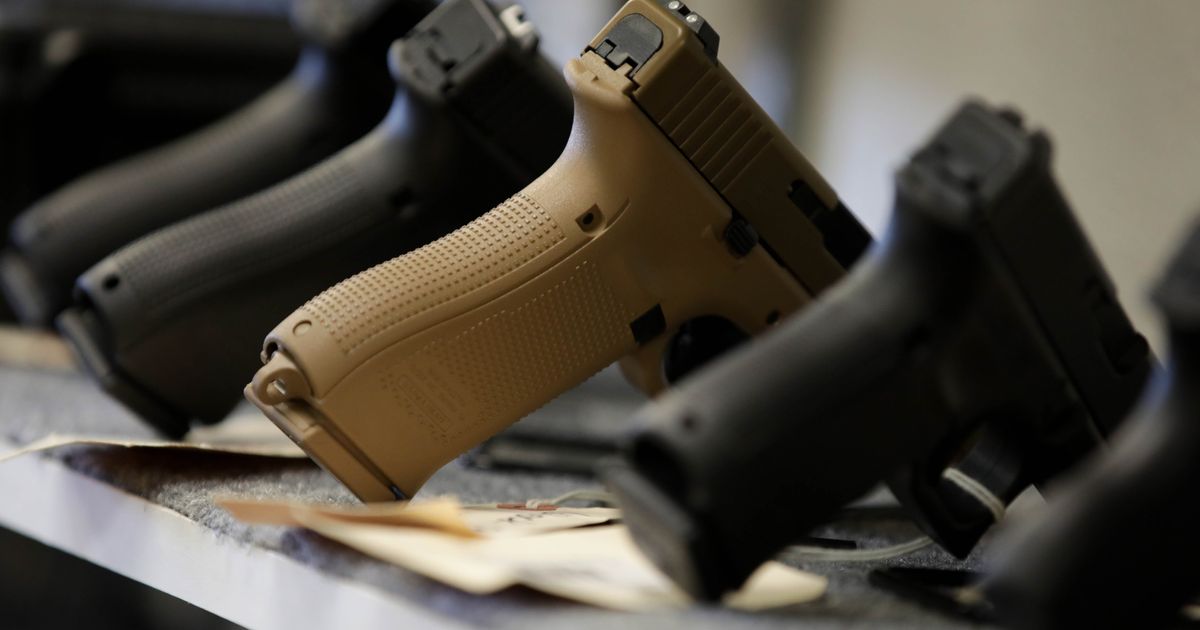 In March 2020, with the first pandemic-related lockdowns sweeping the country, Americans were directed to hunker down in their homes. That month, they went on the biggest gun-buying spree in the country’s history.

The number of estimated gun sales skyrocketed by 80%, topping 2.3 million in a single month for the first time, according to a data analysis from the National Shooting Sports Foundation, the firearm industry’s trade group. Gun sales brushed against that monthly peak several times over the next year.

No one knows the true number of gun sales, which aren’t tracked by any agency. The automated background checks required to buy guns or apply for concealed handgun permits offer the closest proxy, though researchers and groups like the NSSF adjust them in an attempt to distinguish between sales and license applications, or to account for the fact that a customer can buy multiple firearms with one check.

More than two years later, with the worst of the pandemic long over, COVID appears to have left a lasting legacy on gun sales.

There’s no doubt that gun sales have dropped, with monthly sales hovering at a little over half of last year’s peak. Both Sturm, Ruger & Co. and Smith & Wesson, two of the country’s largest publicly traded gun manufacturers, noted declining sales and slackened demand in their last disclosures to investors.

But Americans are still on track for their third-highest gun-buying year of all time, according to NSSF spokesperson Mark Oliva.

“This is not atypical ― when we come off those peaks, the new floor will typically be higher than the ceiling was prior to the peak,” Oliva said. “No industry is going to stay at their peak year after year after year. But if you look at the macro, you’ll see that firearm sales and gun ownership in America remain very strong.”

It’s hard to disentangle the role the pandemic played in boosting gun sales from other, less clearly understood causes that sustained sales over the following months.

Fears that a crime wave would overwhelm police appeared to drive the initial pandemic spike in March 2020, experts interviewed by HuffPost largely agreed. Semi-automatic handguns, which are closely associated with personal protection and rarely used for hunting, have accounted for a solid majority of sales since the pandemic started, according to the NSSF.

But sales also seemed to break new records repeatedly on the heels of separate, if loosely related, events. The 2020 summer of protests following the murder of George Floyd at the hands of a Minneapolis cop heightened fear of crime in some communities, and stoked fear of the police in others, with both trends likely translating into rising firearm purchases.

Joe Biden, a Democrat and vocal champion of reinstituting the federal Assault Weapons Ban, toppled Donald Trump, a Republican with the endorsement of the National Rifle Association, in the 2020 presidential election. The prospect of federal gun legislation typically spurs new rounds of gun sales, as people snatch up firearms they fear might one day become illegal to buy.

“I don’t know how much the pandemic is playing into those 2021 numbers,” said Kelly Drane, research director with the Giffords Law Center to Prevent Gun Violence. “I think we need a few more months away from the pandemic and away from the election to really understand where gun sales are going forward.”

Whatever the causes, the last two years have scrambled the traditional demographics of gun ownership, which have long skewed male, white and conservative.

Some 8.4 million Americans bought their first gun in 2020, with another 5.4 million new buyers last year, according to retailer surveys conducted by the NSSF. Retailers reported major jumps in people of color, especially among first-time buyers. Women accounted for almost half of first-time gun buyers.

Mike Cargill, owner of Central Texas Gun Works in Austin, sees those trends reflected in his customers and the students who come to his classes for a concealed handgun license.

“I have mostly liberals in my class, even today,” Cargill said. “We’ve been seeing a lot more of that since 2020. A lot more Black females, Black males, couples coming in buying two guns ― his and hers ― to protect themselves. I’ve never seen that happen before.”

Research also shows higher risks for violence in homes with guns, especially homicides committed by men against women, according to Matthew Miller, a professor at Northeastern University who studies gun violence and suicide prevention.

“Each one of those people who became new gun owners, knowingly or not, have substantially increased the chance that they’ll die a violent death, along with everyone else who lives with them,” Miller said. “That’s a risk that everyone who becomes a gun owner assumes.”

That correlation between gun ownership and gun deaths was borne out clearly with the pandemic gun rush. Gun deaths jumped nearly 14% in 2020, setting a new record of 45,222. A 34% jump in homicides drove the increase, though the homicide rate remained below the last peak in the early 1990s.

Preliminary data from the Centers for Disease Control and Prevention released in July show another spike of 8% last year, with 48,832 deaths. In 2020, guns displaced car accidents as the top cause of death in the U.S. for minors. The number of mass shooting incidents rose by 48% from 2019 to 2021, according to the nonpartisan Gun Violence Archive.

So far this year, sales have remained steady and have at times bucked historical patterns. For the past two decades, events that raise the possibility of major gun restrictions ― including mass shootings that stir debate over access to semi-automatic “assault” rifles and elections that favor reform-hungry Democrats ― have usually tracked with a jump in gun sales.

But the mass shooting in May that left 19 students and two teachers dead at Robb Elementary School in Uvalde, Texas, did not register as a spike in estimated sales. Neither did the debate and passage of the first major gun reform legislation in a generation in June, or an ongoing wave of state gun restrictions passed in response to mass shootings in Uvalde and Buffalo, New York. The midterm election has not, so far, coincided with a rise in gun sales.

Still, sales have remained high, even if they haven’t followed historic patterns for spiking after certain events.

“It’s not as busy as it was in 2020 with the pandemic,” said Cargill, the gun shop owner. “But it’s still busier than before.”