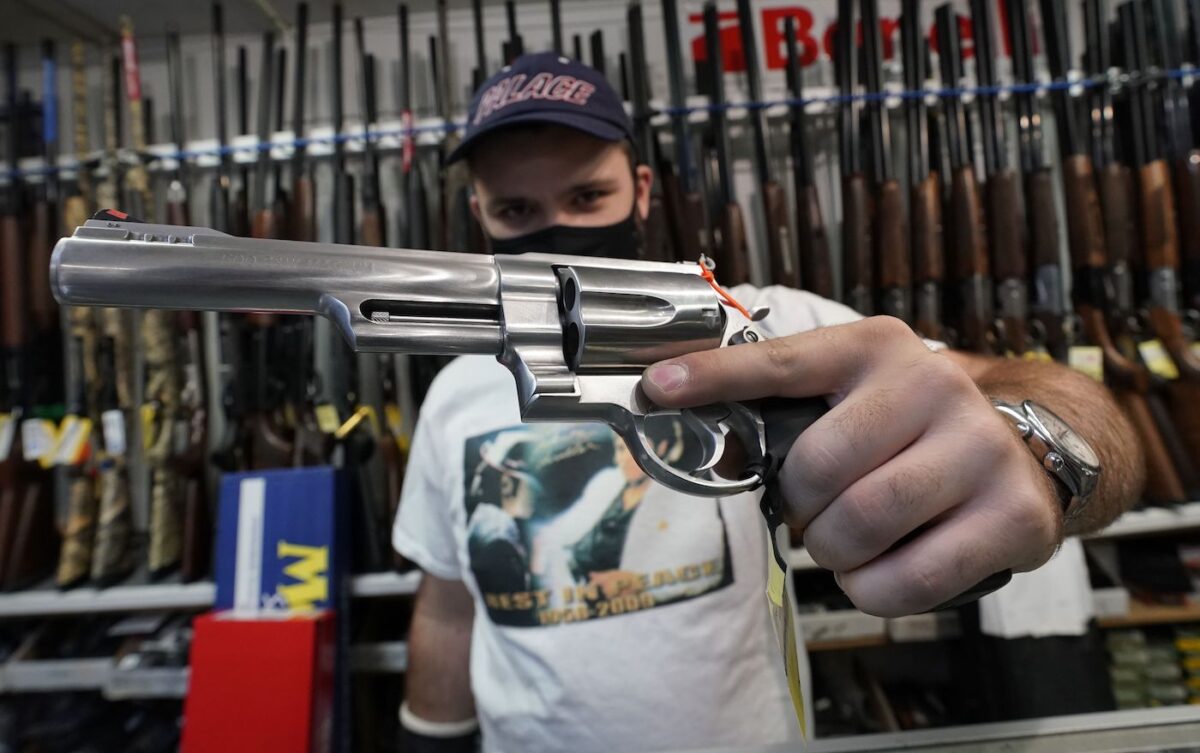 A federal judge in New York on Thursday issued a temporary injunction against portions of the state’s new gun law to allow a pro-gun group to pursue a lawsuit to challenge the measure.

Going into effect on Sept. 1, the law created new requirements to obtain a firearms license, including submitting social media accounts for review and creating a list of private and public places prohibiting the carrying of a gun even for license holders. A bill was proposed by Democrats in New York’s legislature after the U.S. Supreme Court struck down a 100-year-old concealed carry law over the summer.

On Thursday, Chief Judge Glenn Suddaby of the U.S. District Court in Syracuse sided with six New York residents who are members of Gun Owners of America and issued the injunction.

“Simply stated, instead of moving toward becoming a shall-issue jurisdiction, New York State has further entrenched itself as a shall-not-issue jurisdiction. And, by doing so, it has further reduced a first-class constitutional right to bear arms in public for self-defense … into a mere request,” wrote Suddaby in his order.

Suddaby noted that his order would not take effect for another three days to allow lawyers for New York’s government to appeal his ruling in a higher court.

His order blocked provisions of the law that gave new requirements for background checks for gun permits, which include handing over social media accounts. One of those provisions he blocked includes the requirement that a license applicant has to provide evidence to show they have “good moral character,” according to the ruling.

The law’s statewide ban on carrying firearms carried in some public and private properties was also blocked in Thursday’s ruling.

“Historical statues forming the basis of that precedent treated people as being entitled to a firearm unless they pose (or more specifically are found by the government to pose) such a danger,” Suddaby wrote, adding that New York’s law “provides that people are not entitled to carry concealed unless they can persuade a licensing officer (who possesses enormous discretion) that they are not such a danger.”

Several weeks ago, Suddaby ruled that much of the newly enacted law was unconstitutional in dismissing an earlier lawsuit by Gun Owners of America. But he found neither the group nor an individual member of it had standing to file a lawsuit before New York’s law came into effect.

Gov. Kathy Hochul, a Democrat up for reelection in November, claimed the bill would help “keep New Yorkers safe from harm” despite the earlier Supreme Court ruling. The Supreme Court “may think they can change our lives with the stroke of a pen, but we have pens, too,” she declared.

The governor also said that the law will reduce shootings, which she called “gun violence,” amid a surge in violent crime across the state and New York City. “The work we’re doing across the state — from getting weapons off the streets to supporting violence interrupters — will help return these streets to our communities,” she wrote.

Her office has not released a public statement after Suddaby’s order Thursday.

Other than the Gun Owners of America suit, several lawsuits challenging the new law have been filed.

Earlier this month, several dozen churches in upstate New York filed a lawsuit to challenge the law’s provision to ban guns in houses of worship. This week, a Jewish gun club sued Hochul to carry firearms into synagogues, quoting a line from the Torah.

“This law specifically targets religious people, by threatening them with arrest and felony prosecution if they carry their firearms while engaging in religious observance,” the club wrote.

An orthodox Jewish man who started the club, Tzvi Waldman, told the Jewish Chronicle that he is “pretty confident in this case. People are concerned. This is a constitutional right and it’s extremely important to us.”

The National Rifle Association (NRA), which is not a plaintiff in the Gun Owners of America case, sharply criticized the bill after its proposal.

New York was among about a half-dozen states that had gun provisions invalidated by the Supreme Court’s ruling.

This is a developing story and will be updated later. Reuters contributed to this report.

Jack Phillips is a breaking news reporter at The Epoch Times based in New York.