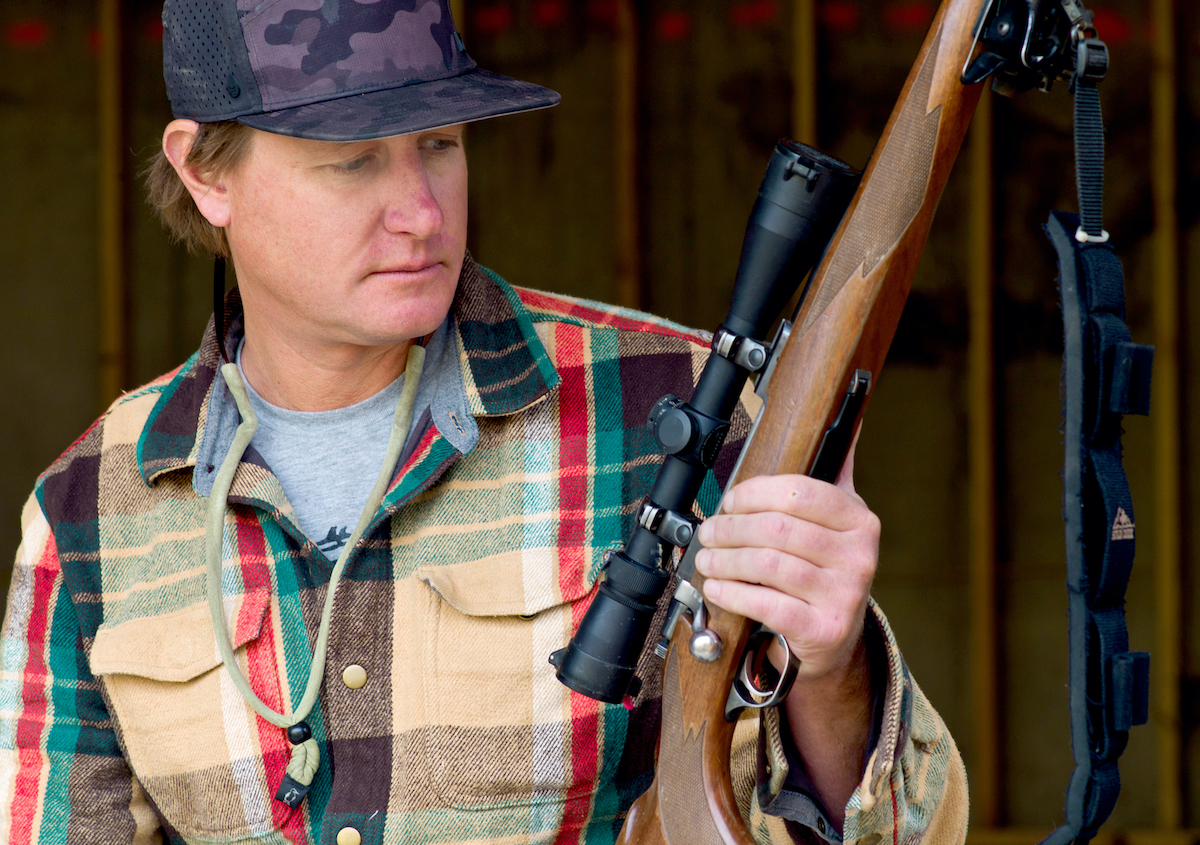 A biologist who has helped rescue dozens of raptors poisoned by lead bullet fragments in game carcasses seeks to educate, not regulate, hunters.

At the Jackson Hole Gun Club’s shooting range, Chris Smith paused after his shooting session to explain why he stopped hunting with traditional lead bullets that spread toxins in the environment and wildlife.

“I use copper to kill with,” said Smith, a shooter with 25 years of hunting under his blaze-orange vest. “It’s better than the lead exploding in the meat,” where it could be ingested by raptors, predators and, yes, people.

“I don’t think it’s great for those animals, or your kids or family,” Smith said of lead, which is known to endanger unborn children, cause anemia and damage the kidney and brain.

Brian Prax was another convert at the range who mostly shuns lead ammunition while hunting “because of the environmental impacts” of the traditional bullet and shot. Add range shooter Trevor Klein to the group; “I don’t really want to eat meat that’s got lead in it,” the 30-year sportsman said.

In Teton County, where both wildlife conservation and hunting are of high interest, the statements of the three randomly selected shooters might encourage Bryan Bedrosian. The raptor biologist has seen and treated too many bald and golden eagles weakened by toxic lead bullet fragments scavenged from hunted carcasses left in the field.

As the big game season in Wyoming gets into full swing, Bedrosian’s lead-free advocacy enters its second year under the umbrella of the non-political educational nonprofit Sporting Lead-Free.

“We’re gaining traction,” Bedrosian said in a call from atop a Montana hill where he was trapping eagles.

Sporting Lead-Free, which Bedrosian co-founded, doesn’t advocate for banning lead ammunition or fishing tackle. Instead the group works to edify hunters and anglers about the environmental and health advantages of alternative metals such as copper, along with those metals’ performance relative to lead.

“We’re against regulation and litigation and feel education is the ticket,” Bedrosian said. The approach helps “steer the conversation away from any type of anti-hunting message or distrust in science,” the organization states. Those tactics have often been used to oppose lead-bullet regulations.

A boardroom in the field

Many of Sporting Lead-Free’s board members, staffers and ambassadors — a cadre of 35 public-facing activists — appear on the organization’s website while afield fishing or hunting.

“We want to build a community of hunters and anglers that is in no way anti-hunting or angling,” Bedrosian said. The conservation director at the nonprofit Teton Raptor Center in Wilson, he launched the lead-free sporting group in 2020, building on seven published research papers linking lead bullets to deleterious effects on wildlife.

Bedrosian has studied birds of prey for 20 years, including golden and bald eagles that rely on Wyoming and Montanta’s winds and open spaces.

The pro-hunting educational approach could help counter charges that promoters of lead-free bullets are deviously using the issue to stop hunting, tread on the Second Amendment and even promote predators like wolves.

Lead ammo is “under attack by many anti-hunting groups whose ultimate goal is to ban hunting,” the National Rifle Association states on its website. “Anti-hunting groups and gun control supporters want lead ammunition banned for hunting to raise the cost of ammunition and, as a result, to dissuade people from participating in hunting and acquiring firearms for that purpose.”

Sidestepping a political trap door allows some hunting groups to accept, if not endorse outright, the use of non-lead ammunition.

Backcountry Hunters and Anglers, a group that boasts more than 40,000 members, for example “encourages sportsmen and women to consider the voluntary use of non-lead ammunition and fishing tackle.” It also backs using the “best available science” when considering the effects of various elements released into the wild environment.

“Muley Fanatic Foundation, Wyoming Game and Fish [and] Wyoming Outfitters and Guides [Association] said they are favorable to our educational approach,” Bedrosian said. The Jackson Hole Gun Club gave Sporting Lead-Free a grant and membership, which includes access to the shooting range south of Jackson.

Lead ammunition is traditional and was used before copper alloys because of its density, cost and availability, despite it being known as a toxin as long ago as 2,000 BC. It works well as a bullet.

“Heavier bullets of the same shape [as lighter alloys] will have a higher ballistic coefficient,” or better flight characteristics, David Crandall, a former captain of the U.S. Veteran’s long-range shooting team, wrote in an email. Crandall, who admits to being “a nerd,” has worked as an engineer at the Advanced Test Reactor at the Idaho National Laboratory in Arco, Idaho and is eager to help explain ballistic physics.

A lead projectile “drops less and is deflected by cross winds less” than lighter alloy bullets fired at the same velocity, he wrote. An alloy bullet of the same caliber as its lead counterpart must be made longer to weigh as much and carry as much impact force.

That creates a ballistic drawback.

But most rifle barrels are built for lead or lead-core bullets, not copper or copper alloy bullets, he says. That’s just one of many factors that can spread skepticism among hunters.

Prax, for example, still fires hand-loaded .338 Lapua magnum cartridges with lead bullets in his purpose-built long-range rifle, which he uses mostly in competitions. There’s no non-lead market cartridge that meets his needs for that specialized rifle, he said.

But the availability of factory non-lead ammunition, the ballistics of those rounds over normal hunting distances and the success he’s seen in downing big game all support his decision to switch to non-lead bullets for most of his hunting.

For his hunting rifles — a .30-06 and a 6.5 mm Creedmoor — “there’s adequate ammo that’s lead-free to achieve the ballistics.

“I’ve had enough success with non-lead to not be concerned,” Prax said. “I would encourage hunters to hunt without lead bullets.”

Such a change shouldn’t be difficult for most hunters who operate in conventional range — say up to several hundred yards, he said. Even though altering “their set-up,” often a lifelong method, can be difficult, shooters can easily convert, he said.

The chef and the bullet

Hunter Will Bradof and his wife, Jennifer, co-own two successful Jackson restaurants — Trio and Local — at which the source of their meats and produce is paramount. There’s a difference, for example, between the local grass-fed beef he serves at the more exclusive 30-table Trio compared to the conventionally grain-finished cuts at the 200+ seat Local at the center of tourist hubbub on the Jackson Town Square.

His passion for food spurs him to source in a way that eliminates companies that are abusing feedlots. “We do care about where it’s coming from,” he said.

That attention “came full circle as to how I felt about harvesting an animal,” he said about his 21 years in the field hunting. This fall he has already packed an antelope and a deer into his “organized freezer” that helps feed his wife and three children.

After starting his hunting years ago with lead ammunition, Bradof switched to copper bullets. Newspaper articles, give-aways of non-lead ammunition by conservation groups, non-lead requirements in Grand Teton National Park’s elk reduction program and an encouragement to use non-toxic bullets on the National Elk Refuge hunt all added to his growing awareness.

“I didn’t know the difference,” he said of his early years hunting. “I read the description of what lead can do when it fragments,” he said, referring to an outcome that worries many non-lead hunters.

That’s the worry about spreading small lead particles, some undetectable to the eye, through game meat. Copper bullets don’t break up that way, and they aren’t toxic.

When butchering an animal killed with a lead bullet, Bradof used to wonder what to do with suspect meat trimmed from around a wound.

Using copper bullets, “it’s limited this worry” of whether to discard it. From an animal killed with a non-toxic bullet, the trim goes in the bin destined for the grinder.

“Would I have done that with a lead bullet?” he asked. “No.

“If I can eliminate the risk, however known or unknown, that feels good,” he said.

Bradof doesn’t want to be spreading lead into the environment of the area’s wildlife either, he said. But doubts about the copper projectile linger.

“I’ve definitely noticed it’s a less-impactful shot,” he said of copper. On elk, “every kill-shot with lead, I’ve always had an exit wound. With the copper, I want to say [there were] zero.”

Bradof hasn’t lost a wounded animal, however. “As long as [copper’s] placed properly, it’s as lethal,” he said.

“I have taken deer, antelope, elk, moose and bison with all-copper bullets,” since converting from lead about a dozen years ago, he wrote in an email. “In my experience, they are every bit as accurate as lead core projectiles.”

He’s never lost an animal, he said. “Much of this has to do with selecting the proper caliber/bullet for the job and most importantly, shot placement.”

Manufacturers are refining the design of copper bullets, he said, noting Cutting Edge, Nosler E-tips, Hammer Hunter and Barnes as manufacturers and types he finds “every bit as effective as any lead-core projectile.

“You don’t get near [as much of] the peripheral meat damage, sometimes referred to as ‘bloodshot,’ that you do with lead-core,” he said of copper bullets. “Therefore, less meat loss.”

Austin oversaw Shooting-Experience founder Humphries’s long-distance shooting record last month, when Humphries hit an 8-inch target 4.4 miles away. Humphries’s declaration about that shot might put much of the debate to rest.

“The bullet that we used when we set the world record a couple of weeks ago,” Humphries wrote in an email, “was a monolithic copper bullet.”

Bedrosian spent a year listening to stakeholders around Wyoming before starting Sporting Lead-Free. The attention to others and grass-roots engagement appears to have paid off.

“I didn’t think we’d get the positive reaction at the state level so quickly,” he said. “We’re now working on a national outreach plan. I think we’ve got the winning ticket.”

This article was originally published by WyoFile and is republished here with permission. WyoFile is an independent nonprofit news organization focused on Wyoming people, places and policy.

Opinion | We can’t cure mental illness, but we can get guns off the streets
Letter to the editor: Step up with a solution on guns | Letters to the Editor
Chuck Haga: We care, fret and worry. But what are we supposed to do? – Grand Forks Herald
Biden Wants to Ban ‘Semiautomatic Weapons’? Dream On.
ILA | NRA-ILA Backed Lawsuit Filed to Challenging Oregon Measure 114