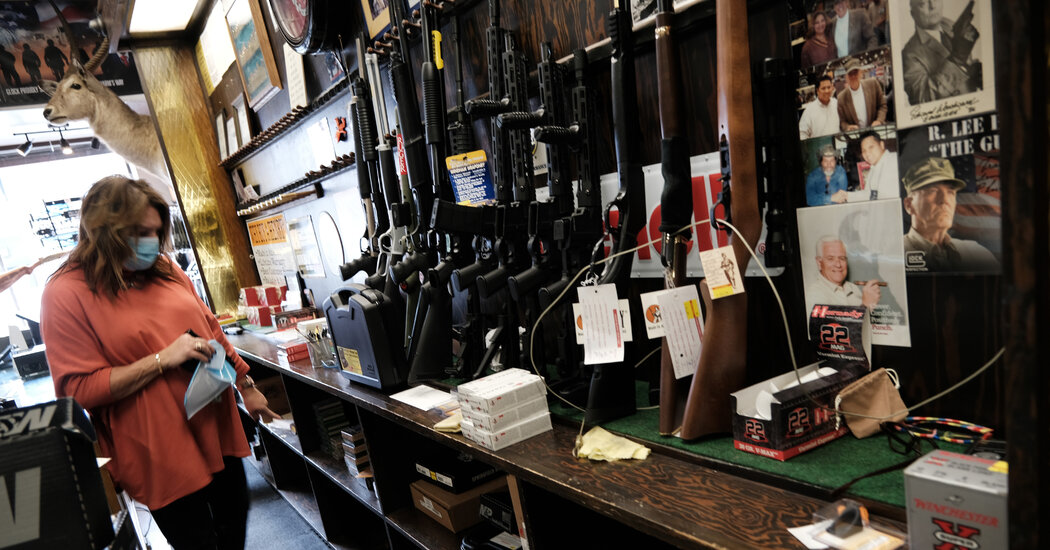 New Jersey residents hoping to carry guns in public would first be required to buy insurance and complete gun-safety training under a measure introduced by legislative leaders on Thursday — steps that, if enacted, would represent some of the strictest gun rules in the country.

Handguns would also be barred from 25 categories of public spaces, including bars, beaches, stadiums and day care centers, and from any private establishment that does not post signs explicitly stating that weapons are permitted, according to a draft of the bill.

New Jersey is the latest state to attempt to blunt the effect of a Supreme Court decision that offered a broad interpretation of the Second Amendment right of Americans to arm themselves in public as it overturned a New York State law that barred most people from publicly carrying guns.

Last week, a federal judge in New York invalidated key components of legislation adopted in Albany in response to the Supreme Court’s gun ruling; New York’s attorney general has appealed the order, and on Wednesday a federal appeals court agreed to allow the state to continue to ban guns in some public places as a three-judge panel weighs a request to keep the law in place longer. In California, a similar bill fell one vote short of passage in September and is expected to be reintroduced in December.

New Jersey’s legislation, which is comparable to New York’s but adds additional licensing requirements, is certain to face legal scrutiny.

“We’re trying to protect the nine and a half million people in the State of New Jersey,” said Craig J. Coughlin, the Democratic leader of the State Assembly. The areas where guns would not be permitted, he said, were “pretty obvious areas where people would be gathered and not expect people to be carrying weapons.”

Laws in those six states, home to a quarter of all Americans, gave government officials substantial discretion over issuing licenses to carry guns outside the home. In New Jersey, for example, applicants for so-called carry permits needed to demonstrate a justifiable need for a gun in public places, a policy that eliminated most people other than law enforcement officers.

The Supreme Court’s decision threw a century’s worth of practice into disarray and sent lawmakers scrambling to rewrite laws suddenly deemed unconstitutional in states that have also managed to keep the rates of gun deaths relatively low. In 2020, Hawaii, Massachusetts and New Jersey had the three lowest rates of gun deaths in the United States; New York was fifth, and California was seventh, according to the Centers for Disease Control and Prevention.

Senator Edward Durr Jr., a first-term Republican from South Jersey who has said he ran for office in part because he was unable to obtain a license to carry a handgun, predicted that courts would eventually overturn limits placed on handgun ownership.

“Self protection is not a privilege,” he said. “It is a God-given right.”

Erich Pratt, the vice president of Gun Owners of America, said his organization strongly opposed the legislation and would consider challenging it in court, as the group’s members are doing in New York.

“We look at this just as another attempt to demonize firearms and gun owners,” Mr. Pratt said.

William J. Castner, an adviser to Gov. Philip D. Murphy on firearms issues, said the legal challenges that the New York law is facing will be instructive as New Jersey finalizes its legislation.

“New Jersey at least now has the benefit of crafting this law with an eye toward defending new requirements on training, mandatory insurance, disqualifying offenses and sensitive places where guns will not be allowed at all,” Mr. Castner said.

“Every car on the road is required to have insurance,” said Nicholas Scutari, the Democratic president of the Senate, who is sponsoring the legislation. “We’re going to allow people to have weapons and carry them around with them without insuring them? They’re taking on a lot of responsibility.”

The Assembly is expected to vote on the bill, which is being sponsored by Assemblyman Joseph Danielsen, a Democrat and an avid gun owner, at its next voting session in two weeks, Mr. Coughlin said.

An aide to Mr. Murphy, who has supported sweeping gun-control initiatives, said that the Democratic governor would sign the legislation, much of which mirrors policy goals he laid out immediately after the June Supreme Court ruling.

Since then roughly 300,000 New Jersey residents have applied for permits to carry guns in public, state officials said. Many of those applications have been stalled and referred to the courts in the absence of a new law clarifying state policy.

The bill, as proposed, would require applicants to submit four nonfamily character references, all of whom would be interviewed by a law enforcement representative before a permit could be issued. Residents convicted of many crimes, including violating a restraining order, would be disqualified from obtaining a carry permit.

The licensing fee would increase to $200, from $2. And gun owners would be responsible for paying for gun-safety training that would include online instruction, in-person classes and target practice at an approved range.

“The Supreme Court has tilted the playing field, and states are going to have to be as creative as they can and explore more innovative policies to address the gun violence epidemic,” Mr. Skaggs said.

Finding insurance to purchase may prove difficult, said Gary La Spisa II, vice president of the Insurance Council of New Jersey. He suggested that any legislation related to insurance be worded carefully.

“So that there’s enough clarity about what needs to be purchased, but don’t be overly specific and restrict the availability of what’s out there,” Mr. La Spisa said.

“I can’t really say on the record if anyone would jump into the business,” he added.

The San Jose City Council first voted to require gun owners to carry insurance in January. The mayor, Sam Liccardo, said he was confident that the law, which is being challenged in federal court, will be implemented as planned.

He said he was hopeful that the legislation would lead insurance companies to mandate behavioral changes among gun owners, such as requiring that firearms be stored in locked safes and include trigger locks.

He said he welcomed similar efforts by other government entities.

“It’s critical,” he said. “This works best if we can scale it. We need to get insurance companies into the game of incentivizing safety among gun owners.”