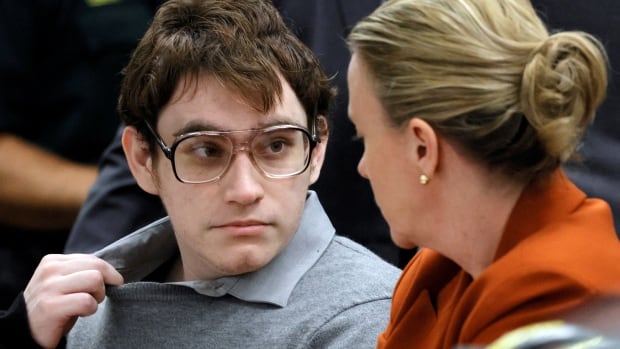 A jury spared Florida school shooter Nikolas Cruz from the death penalty Thursday for killing 17 people at a high school in 2018, instead calling for him to spend life in prison with no possibility of parole in a decision that left many families of the victims angered, baffled and in tears.

The decision came after seven hours of deliberations over two days, ending a three-month trial that included graphic videos and photos from the massacre at Marjory Stoneman Douglas High School in Parkland, Fla., heart-wrenching testimony from victims’ family members, and a tour of the still blood-spattered building.

Under Florida law, a death sentence requires a unanimous vote on at least one count. The jury said it could not unanimously agree that Cruz should be executed.

Circuit Judge Elizabeth Scherer will formally issue the sentence on Nov. 1. Relatives, along with the students and teachers Cruz wounded, will be given the opportunity to speak.

“We are beyond disappointed with the outcome today,” Lori Alhadeff, whose daughter Alyssa was killed, said at a news conference after the jury’s decision was announced.

“This should have been the death penalty, 100 per cent. Seventeen people were brutally murdered on Feb. 14, 2018. I sent my daughter to school and she was shot eight times. I am so beyond disappointed and frustrated with this outcome. I cannot understand. I just don’t understand.”

The verdict was “not what we were looking for,” said Florida Gov. Ron DeSantis, expressing his disappointment.

Cruz, 24, pleaded guilty a year ago to murdering 14 students and three staff members and wounding 17 others on Feb. 14, 2018. Cruz said he chose Valentine’s Day to make it impossible for Stoneman Douglas students to celebrate the holiday ever again.

Cruz, his hair unkempt, largely sat hunched over and stared at the table as the jury’s recommendations were read. Rumblings grew from the family section — packed with about three dozen parents, spouses and other relatives of the victims — as life sentences were announced.

Many shook their heads, looked angry or covered their eyes as the judge spent 50 minutes reading the jury’s decision for each victim. Some parents sobbed as they left court.

Lead prosecutor Mike Satz kept his case simple for the seven-man, five-woman jury. He focused on Cruz’s eight months of planning, the seven minutes he stalked the halls of a three-storey classroom building, firing 140 shots with an AR-15-style semiautomatic rifle, and his escape.

He played security videos of the shooting and showed gruesome crime scene and autopsy photos. Teachers and students testified about watching others die. He took the jury to the fenced-off building, which remains blood-stained and bullet-pocked. Parents and spouses gave tearful and angry statements.

Cruz’s lead attorney Melisa McNeill and her team focused on their belief that his birth mother’s heavy drinking during pregnancy left him with fetal alcohol spectrum disorder. Their experts said his bizarre, troubling and sometimes violent behaviour starting at age two was misdiagnosed as attention-deficit/hyperactivity disorder, meaning he never got the proper treatment.

That left his widowed adoptive mother Lynda overwhelmed, they said. She died just months before the mass shooting.

In rebuttal, Satz and his team contended that Cruz did not suffer from fetal alcohol damage but has antisocial personality disorder. Their witnesses said Cruz faked brain damage during testing and that he was capable of controlling his actions, but chose not to. For example, they pointed to his employment as a cashier at a discount store where he never had any disciplinary issues.

Prosecutors also played numerous video recordings of Cruz discussing the crime with their mental health experts where he talked about his planning and motivation.

The defence alleged on cross-examination that Cruz was sexually molested and raped by a 12-year-old neighbour when he was nine.

Tony Montalto, father of Gina Montalto, said: “How can the mitigating factors make this shooter, who they recognized committed this terrible act — acts, plural — shooting some victims more than once on a pass, pressing the barrel of his weapon to my daughter’s chest — that doesn’t outweigh that poor little what’s-his-name had a tough upbringing?”

“Our justice system should have been used to punish this shooter to the fullest extent of the law.”

Several students attending Stoneman Douglas at the time of the mass shooting became politically active as a result of their experience, helping organize national March For Our Lives rallies.

The mass shooting has also led to fallout locally. Broward County Deputy Scot Peterson, assigned to the campus that day, was fired for neglect of duty and is awaiting trial on child negligence charges.

In August, DeSantis removed four members of the Broward County school board Friday, one week after a grand jury empanelled to investigate the 2018 school massacre accused them and district administrators of “deceit, malfeasance, misfeasance, neglect of duty and incompetence” in their handling of a campus safety program.

School board races in Florida are nonpartisan, but the ousted four are all Democrats. DeSantis, a Republican, replaced them with members of his party.

Other board members not affected by that change now include Alhadeff as well as Debra Hixon, whose husband, Chris, died in the Stoneman Douglas shooting. They were elected to the board after running on platforms promoting better campus security.

Then-president Donald Trump met with several students and their families at the White House after the shooting, promising meaningful gun reform, but efforts from the White House and in Congress fizzled, with Trump soon appearing at the National Rifle Association’s annual convention and promising to champion expansive gun ownership rights.

After another wave of mass shootings this spring, including the massacre of 19 students and two teachers at a Texas elementary school, President Joe Biden in June signed into law the most significant gun violence bill in decades.

The legislation will toughen background checks for the youngest gun buyers, keep firearms from more domestic violence offenders and help states put in place red flag laws that make it easier for authorities to take weapons from people adjudged to be dangerous. Most of its $13 billion US cost will help bolster mental health programs and aid schools.

While the new gun law does not include tougher restrictions long championed by Democrats, such as a ban on assault-style weapons and background checks for all firearm transactions, it is the most impactful gun violence measure produced by Congress since enactment a long-expired assault weapons ban in 1993.

Time to reinstate assault weapons ban
Mass Shootings Plague the U.S. – The Spectator
Oregon Measure 114: Sheriffs, police chiefs tell judge their agencies are ‘unprepared’ to support gun permit program
Senator Chris Murphy: ‘victory after victory’ is coming for US gun control | US gun control
Letter to the editor: Step up with a solution on guns | Letters to the Editor