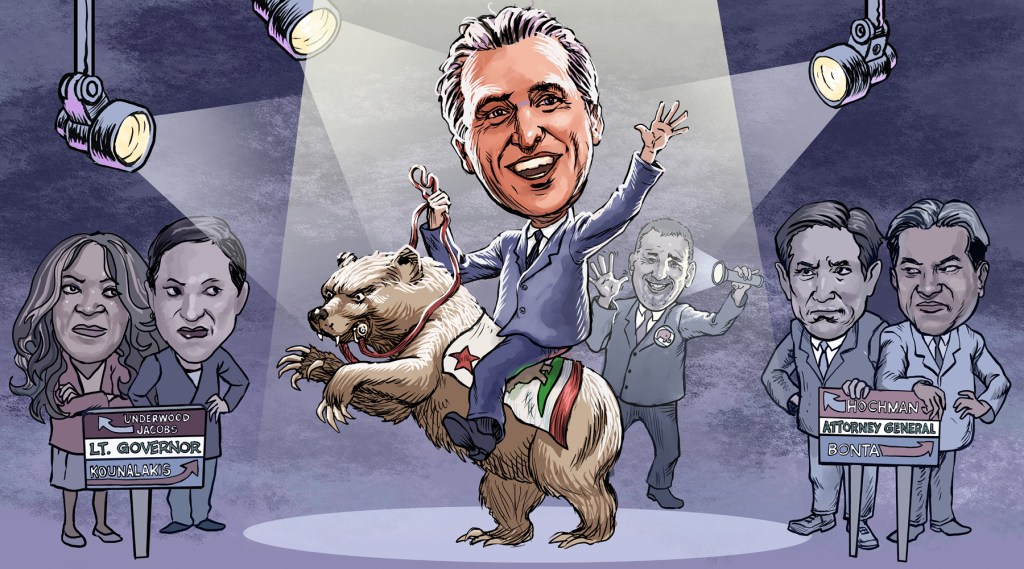 Did you hear there is an election for governor in California this November?

You should have received your ballot in the mail this past week. Gov. Gavin Newsom, that guy at the top of the ticket, must feel pretty good about his re-election chances. He’s not spending much time convincing California voters he deserves a second term. Instead, he’s been turning the spotlight on his fight with the Golden State’s red-state rivals, goading governors in Texas and Florida in growing anticipation that Newsom wants to lead the country, not just California.

Is the focus on Newsom’s national aspirations sucking up all the oxygen in California’s election? There’s been so little excitement about the race for governor this fall that it’s been difficult for the candidates and causes down the ballot to get much attention, either.

But there is plenty to get excited about: A handful of competitive Central Valley and Southern California House districts could determine if Republicans retake Congress. There are close mayoral races in some of the state’s biggest cities — Los Angeles, Oakland and San Jose. Two NFL team owners are dumping bundles of cash into city races in Santa Clara where the 49ers play. There are races for state school superintendent and attorney general plus half a dozen other statewide ballot measures, at least one of which Newsom has also weighed in on.

But will voters show up – or at least drag themselves out to the curb to drop their ballots in the mail?

Paul Mitchell, vice president of Political Data Inc., which analyzes voting trends for progressive campaigns, said state efforts to boost voter registration and ease voting have resulted in more people casting ballots in recent elections even when the percentage of those registered who vote – the usual gauge of turnout – is modest.

But Mitchell added that enthusiasm for voting is another matter, and tends to go up when voters are mad. A Public Policy Institute of California poll last month found likely voters about evenly split whether the state is headed in the right or wrong direction.

“We’re at a higher registration rate than we’ve been since we allowed women to vote,” Mitchell said. “That doesn’t speak necessarily to do they turn out to vote. All the mechanical pieces have made it easier to vote, but the other half is enthusiasm.”

How enthusiastic is Newsom about campaigning for his current job? He doesn’t even have a photo and candidate statement in the state’s Official Voter Information Guide — according to the Secretary of State’s office, he didn’t agree to the spending limits required to pay for a statement in the guide. Newsom campaign spokesman Nathan Click said it was a decision the governor had to make before the primary out of caution, not knowing who might run against him.

The governor is “not taking anything for granted,” Click said.

“This race is an extension of what he’s been doing across the country,” he said. “America is facing an attack on our rights and our freedoms. Gov. Newsom is leading this charge for Democrats and people who believe in California’s values.”

The last time Newsom tweeted about his opponent, was June 6 – a day before the primary. The governor criticized Dahle’s support for Second Amendment gun rights and his “anti-choice pledge to vote against any funding for reproductive rights,” dismissing him as “anti-science” and “pro-Trump.”

CA — every vote counts.@BrianDahleCA is running against me. He has an A rating from the @NRA that he boasts about.

He signed an anti-choice pledge to vote against any funding for reproductive rights.

Newsom agreed to debate Dahle on Oct. 23 – after many voters will have mailed back their ballots.

He’s spent the summer sparring with Republican leaders in other states like Texas and Florida in ads, billboards and social media, drawing them into debates of hot-button issues like guns and abortion. It’s been an interesting diversion in an election that for most Californians is otherwise lacking much drama.

Newsom already enjoyed favorable re-election odds after he handily defeated a recall vote in September 2021 with 62% voting to keep him in office.

“Any doubts about Newsom’s reelection race disappeared after his handsome victory in the recall election,” said Larry J. Sabato, director of the University of Virginia’s Center for Politics. “Like other Democratic and Republican governors around the country, Newsom is maneuvering for 2024 in case Biden does not seek re-election.”

But the U.S. Supreme Court’s ruling over the summer by a Republican-nominated majority overturning the Roe v. Wade constitutional right to abortion has given Democrats a lifeline.

Jack Pitney, a Claremont McKenna College political science professor, said that in California “it remains to be seen whether people get excited about the House races when there aren’t any competitive statewide races.”

Democratic U.S. Sen. Alex Padilla, whom Newsom appointed to replace Kamala Harris after she was elected vice president, won more than half the vote in the June primary and is expected to coast to victory over Republican Mark P. Meuser, a lawyer.

There are a handful of newly redrawn House district seats considered competitive, and incumbents Republican David Valadao and Democrat Josh Harder in the Central Valley and Republicans Mike Garcia and Michelle Steel and Democrat Mike Levin in Southern California could be vulnerable.

In the governor’s race, polls show Dahle trailing Newsom, with the farmer from Lassen County unfamiliar to more than half of likely voters. Republicans, who last won statewide races in 2006 with Arnold Schwarzenegger for governor and Steve Poizner for insurance commissioner, are struggling for traction in races for other state offices as well.

Though high-profile California crimes, from smash-and-grab thefts to drug addicts sprawled across urban streets, have led national newscasts, incumbent Attorney General Rob Bonta, whom Newsom appointed to replace Xavier Becerra when he became U.S. health secretary, won 54% of the vote in the June primary. That gives him an advantage over Republican runner-up Nathan Hochman who got 18%.

The only Republican running statewide to generate some buzz has been Lanhee Chen, who led the field of six contenders for Controller with 37% of the primary vote over Democratic runner-up Malia Cohen’s 23%. But since three of the four other candidates were Democrats and the fourth a member of the Green party, those votes may well go to Cohen in November.

“The controller race would be interesting if people know what a controller is, but they don’t,” said Pitney, referring to the elected office for what amounts to the state’s bookkeeper.

But Proposition 30, a new tax on California’s wealthy to subsidize already heavily subsidized electric vehicles, might be in for a close race. Newsom has campaigned against it, calling it a subsidy for its chief backer, ride-hailing company Lyft. Either way, few Californians would end up paying the tax.

Voters have twice before rejected the union-backed regulations on dialysis clinics proposed in Proposition 29. There’s no opposition to Proposition 28 to raise state funding for school arts programs. And polls show voters support Proposition 31 to keep the state’s ban on flavored tobacco.

That leaves Proposition 1, a statewide ballot measure to enshrine abortion rights in the California Constitution, which Newsom hopes will spur Democrats to vote. Last week, the governor launched a multimillion-dollar ad campaign to boost the effort. Polls show it passing overwhelmingly, but it’s unclear how much the issue is motivating voters.

Though he says he’s pro-life and will vote no, Dahle said ultimately Prop 1 is up to voters. But he’s banking they have more pressing concerns on their minds – rising crime, homelessness, taxes and gas prices in a state more and more people are leaving.

Unlike the leading Republican offerings in last year’s failed recall, Dahle is not a provocative Los Angeles talk radio personality and isn’t bringing a live bear on the campaign trail. He touts his track record working across the political aisle to get things done.

“I’m not running to hold office, I’m running to make California better,” Dahle said. “I’m not going to change who I am. My personality is to dig in and work hard. I’m a farmer.”

Click insisted Newsom will be doing more on his re-election soon.

“You only have to look one year ago,” Click said, “to the referendum on his leadership, the recall, to see that Californians are enthusiastically behind him and his agenda.”

ILA | CA DOJ Gun Owner Data Leak Due to “Deficiencies in Policies, Procedures, and Inadequate Oversight” Study Finds
I can’t forget the Sandy Hook shooting
What is the status of Oregon Measure 114 new gun limits?
Inland PAC fights for gun rights close to home – San Bernardino Sun
Number One Responsibility for All 46 Presidents Is Contained in the Oath of Office: Protect the Constitution