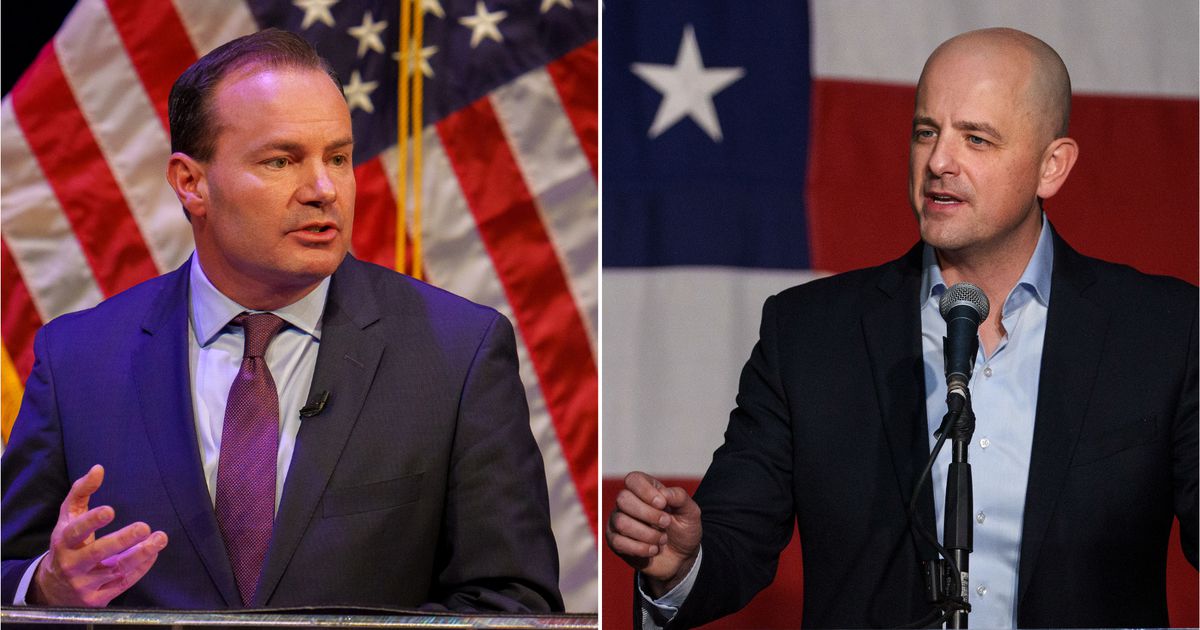 Editor’s note • This story is part of The Salt Lake Tribune’s voter guide for the 2022 midterm elections. You can find all the stories in both English and Spanish here.

Instead of facing a Democrat with low odds, Republican Sen. Mike Lee, who touts himself as a “constitutional conservative,” is up against independent candidate Evan McMullin, who also bills himself as a conservative.

The two have sparred over who the real conservative is, with McMullin calling Lee a “constitutional con man” at a September rally, and Lee lumping McMullin in with Democrats after the state party voted to support him over putting forward their own candidate, calling him a “liberal” who embraces a “socialist agenda” in campaign emails.

One of the pair’s most notable differences is their opinion of former President Donald Trump. In 2016, McMullin launched a quixotic presidential bid as an alternative to Trump and Hillary Clinton. And although he voted for McMullin in 2016, Lee supported Trump’s reelection bid in 2020 and has compared the former president to Book of Mormon military commander Captain Moroni.

McMullin, who decided to enter the Senate race after the insurrection at the U.S. Capitol on Jan. 6, has built his campaign with the hope that voters from both major parties will back him as a rebuke of what he calls “extremism” — a movement he has tied to Trump.

Aside from their differing views on the former president, though, are the two candidates all that different? Here’s what they’ve said on some of the issues most important to Utahns this election:

In June, Lee told The Salt Lake Tribune’s editorial board that “Inflation is largely a creature of excessive federal spending and stimulus. Congress spent unimaginable sums of money during the pandemic and President (Joe) Biden signed trillions more in his early days in office.”

Lee has proposed his own three-part plan for reducing inflation: which includes a measure to make it harder for the Senate to approve spending bills when inflation is high; a bill that reduces federal shipping regulations; and legislation that would make federal land available to states and municipalities for housing.

When prodded by Lee’s campaign on Twitter, McMullin said he didn’t like the Inflation Reduction Act in full, but that “there are important parts of this bill that I support.” McMullin said if he were in the Senate, “I’d be at the negotiating table carving out a better bill for Utah — because that’s the job.”

While McMullin, like Lee, thinks the answer to curbing inflation is cutting federal spending, he told The Tribune’s editorial board that his focus would be on helping Medicaid and Medicare lower health care costs by negotiating prescription prices, among other health care reforms, and “avoiding unnecessary wars”.

During his 2016 presidential campaign, McMullin had strong words about abortion.

“From conception to death — and any time in between — life is precious and we have a responsibility to protect it. A culture that subsidizes abortion on demand runs counter to the fundamental American belief in the potential of every person — it undermines the dignity of mother and child alike,” he said on his website.

In the intervening years, although he still identifies himself as “pro-life,” McMullin’s approach to abortion seems to have evolved somewhat. He told The Tribune’s editorial board that he believes states should have a role in shaping their own abortion policy, but that the federal government should step in to prevent states from going to “extremes” — like, he noted, forcing children who were the victims of rape to carry pregnancies to term, preventing pregnant people from traveling to obtain an abortion and banning contraceptives.

McMullin said in a statement following the Dobbs decision that making contraception more available and offering more support for families is “what truly protects life.”

In an interview with The Tribune, the independent candidate said Utah’s abortion trigger law is “a good starting place,” before adding that lawmakers now also need to strengthen the safety net that makes child rearing more doable and address unanswered questions related to prenatal care.

“What are we doing actually to help women? … We need to be more compassionate about women finding themselves in impossible situations,” McMullin said.

Throughout his two terms in the Senate, Lee has been vocal about his opposition to abortion.

“Since every human life holds innate and profound dignity and worth from conception, it is essential that the federal government respect each human life,” his Senate website reads.

Early in his first term, the then-rookie senator proposed a bill to restrict abortions in Washington, D.C. — one of the few places in the U.S. that for decades has had no limits on abortion. He later tacked the measure onto unrelated pieces of legislation, hoping to get it passed. It never was.

Before the U.S. Supreme Court heard Dobbs v. Jackson, the landmark case that undid Roe v. Wade, Lee teamed up with Sens. Ted Cruz, R-Texas, and Josh Hawley, R-Missouri, to file a “friend of the court” brief that urged it to reconsider Roe.

Lee previously clerked for Justice Samuel Alito, who authored the Dobbs decision. According to Lee’s website, he supports a national ban on abortion after 20 weeks, with limited exceptions.

Late last year, Lee and four other Republican senators told their colleagues they’d withhold support for the 2022 omnibus spending bill unless funding for Trump’s border wall, which had been cut by Biden, was restored. The appropriations bill passed anyway, without money for the wall.

In an op-ed published in The Washington Times last month promoting the Stopping Border Surges Act, which Lee introduced in the Senate, the Utahn said that America’s immigration policies are “riddled with loopholes.” That’s because, according to Lee, the laws are primarily reactive and focused on the short term.

“I spent two years as an LDS missionary serving recent immigrants in the Texas Rio Grande Valley,” Lee wrote. “I can report that these loopholes serve neither current nor hopeful U.S. citizens. Instead, they create a perverse set of incentives for border surges, often with deadly consequences.”

His proposed solution includes limiting the interpretation of the Flores Settlement Agreement, which prohibits the government from keeping immigrant children in detention facilities for longer than 20 days, to only applying to unaccompanied minors. Children who come with a parent would instead be held for the duration of the parent’s immigration proceedings.

Lee says that measure would keep adults from using children to secure an earlier release.

The legislation would also require any immigrants seeking asylum to first apply for, and be denied, asylum in another country. In April, Lee cosponsored a resolution expressing disapproval of changes the Biden administration was making to the asylum process to address a backlog of cases.

With the current makeup of Congress, the Stopping Border Surges Act has little chance of passing.

Lee is one of a number of senators who has introduced the still-unpassed, bipartisan Fairness for High Skilled Immigrants Act multiple times — he most recently co-sponsored it with Vice President Kamala Harris while she was in the Senate. It would remove per-country limitations on employment-based visas and increase the per-country limitation for family-sponsored immigrants.

During his presidential run, McMullin, who briefly volunteered as a refugee resettlement officer for the United Nations, called for a massive expansion of the Border Patrol and for a wall to be built in some places along the southern border. He said he opposed mass deportation and believes undocumented immigrants should have a path to becoming citizens.

“Our country’s immigration policy should serve its economic interests,” he wrote at the time. “The best and brightest from all over the world want to live and work in America, yet the current immigration system mistakenly prioritizes the reunification of extended families.”

He took to Twitter in 2019 to criticize Trump’s border wall, saying, “We need comprehensive immigration reform and stronger border security, but anti-immigrant rhetoric is a tactic of the feeble-minded fear-mongers of the far-right everywhere. Trump’s silly wall nonsense is more of the same. It’s a waste of taxpayer dollars and it’s not who we are.”

If election, according to his campaign website, McMullin says he would aim to “keep America safe” by “securing our borders and treating immigrants humanely.”

Both Lee and McMullin say they defend the Second Amendment, but since the May 2022 school shooting in Uvalde, Texas, that killed 17 elementary school students and two teachers, the latter has been more vocal about supporting gun safety measures.

Lee has an “A” rating from the National Rifle Association, while McMullin has a “D.”

In Congress and after the Texas shooting, Lee didn’t support bipartisan legislation to enhance background checks for firearm buyers under 21 years old and encourage states to pass “red flag” laws allowing law enforcement to seize guns from someone deemed a threat, among other things. Utah Sen. Mitt Romney was one of 15 Republicans to cross party lines to vote for the bill.

In 2016, McMullin, a former CIA agent, used strong language in criticizing gun control measures, describing the Bureau of Alcohol, Tobacco and Firearms as a “back-door gun control organization embedded inside the Federal government.”

“As president, Evan McMullin will never infringe upon the rights of law-abiding gun-owners,” his website said. “Instead, he will respect the founding spirit of our country by ensuring that Americans have the ability to defend their families and enjoy their sporting traditions without government interference.”

There is no mention of gun rights or the Second Amendment on the priorities page of McMullin’s Senate campaign website.

Chuck Haga: We care, fret and worry. But what are we supposed to do? – Grand Forks Herald
Time to reinstate assault weapons ban
Opinion | We can’t cure mental illness, but we can get guns off the streets
ILA | NRA-ILA Backed Lawsuit Filed to Challenging Oregon Measure 114
Why Biden’s repeated call for an assault weapons ban could be a political winner